heh was going to post this to 'music' but thought it would die a hasty death, ignored in a keruffle of grime discussion....

brecht's non-'literary' stuff- the threepenny opera, happy end, mahoganny, kuhle wampe- seem an interesting way of seeing the scraps seen in the MIA thread and others as here you have intellectuals and marxists like eisler, bb and co explicitly having some sort of dialogue with popular culture- not by pretending there are no binaries, no differences, but by throwing stuff together that ought not to make sense and working off the friction generated....this then leads to all sorts of wierd shit- the threepenny opera filtering through to des o connor doing 'mack the knife' or to all manner of esoteric agitproppery....

they're also all very funny.

but what makes them especially interesting is that they tie themselves so rigorously to a (in retrospect maybe dubious, whatever) political programme and philosophy, yet are so unafraid of being entertaining. this might be because there was an *actual* mass movement to tie themselves to- i mean the maoism of cornelius cardew or someone always seemed a little risible as their politics were so fantastical- eisler's less so as he was writing FOR a movement. but over the last 6 or 7 years there has been all manner of protests from the single issue stuff like the war or the sysematic critique of the fair trade museli and george monbiot book lot. this has, pretty much inspired no interesting music/film/whatsoever (save for documentaries) why so?

so what do people think about this stuff? am i making any sense whatsoever? does this just evoke memories of horrific drama school productions of 'the caucasian chalk circle'?

or alternatively, do people just want to talk about what the best versions of the songs are, cos i'm fine with that

i'm woefully behind on my brecht/eisler. i think i have a lotte lenya record somewhere (scratches head) besides that i've only a gil evans cover version.

i remember reading ages ago that mixmaster morris had a huge collection of eisler music which he picked up in east germany, and to be honest was a little baffled (if impressed). reading your comments here though has pulled into focus for me whats interesting about them from a "modern" perspective.

i suppose alot of music along the marxist axis does suffer (stuffy folk whining, plymouth sinfonia's slightly clumsy detente etc) and maybe you're right, that the solution is to embrace contradiction, not like Maya has done deny that there is a contradiction at all. of course this makes the music appear absurd (imagine if i with my toffee-nosed accent made a 'Grime' record in which i rapped about my RSS injury over a slightly collaged beat made of old ethnographic records and classical music), but thats a good thing isnt it.

i think this is what is still so interesting about robert wyatt's stuff - he still remains deeply engaged in the whole marxist project and seemingly embraces the complexities and contradictions in what he does - his great star turn at the mercury for example.
sorry i can't really join in with brecht stuff apart from remebering bowie doing baal on tv in the dim and distant (also scratching head, was that even brecht?!?)
O

i suppose alot of music along the marxist axis does suffer (stuffy folk whining, plymouth sinfonia's slightly clumsy detente etc) and maybe you're right, that the solution is to embrace contradiction, not like Maya has done deny that there is a contradiction at all.

yeah that's kind of what i was getting at, making the joins obvious- i think that's also the difference with something like the pop group.

i for one would pay good money to hear this

robert wyatt is a fine example, its a shame its usually left to the oldsters- actually i think the last soft pink truth album was going in the sort of direction i'm talking (none too coherently) about

The Young Gods did a whole Brecht 3 Penny' redo some years back,
can remember their version of Charlotte' .

Not such oldsters , pretty much out of the blue it was

Would have to dig for more detail then that
O

anyone up for this?
http://www.rfh.org.uk/main/events/94435.html
though it does look quite prohibitively priced plus y'know the bill is slightly iffy- still i would pay thirty quid just for the off chance that smith might do 'pirate jenny' (surely bit of a precursor to 'piss factory', that one)
B

Let's not forget that BB, like -- shamefully -- almost all of the left at the time, was a bona fide stalin groupie. While being silent on the purges and the GULAG, he said about the "confessions" of Kamenev und Zionviev: <B> The more innocent they are, the more they deserve to die.</B>
Last edited: Jun 21, 2005

I saw an excerpt from one of his poems the other day and thought it was hilarious, although I got the impression it wasn't supposed to be. 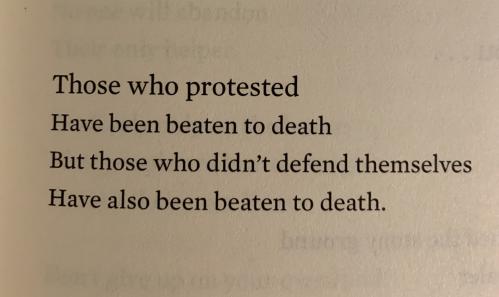 Marxists want successful art to point to. Prynne maybe but otherwise you're struggling. That's why I can't be a Marxist. It's anti life anti imagination.

Hmmm.... sounds kinda blackly comic to me.
But that line is echoed in Heart of a Dog - the film at least, not sure it's in the book - in a way that sounds like it must be a homage to that, and which is certainly played for laughs. It's the song of the red army or something in the film.

Or at least that was how it was translated, maybe it's not inspired by that, I dunno.

What about Zizek? He's quite fun in small doses.

yeah but he's a liberal

Yeah, unless you were the victim

Funny but not fun perhaps.

You're right though. It just makes me think of dust and cobwebs and beige clothes and paper.