And of course it was just a reminder to all that when I'm typing this it could be read by anyone out there in the world who takes an interest.

quite scary really. We lapse into thinking we’re talking to the same dozen people


wait what? you mean anyone can read this stuff?

woops said:
And of course it was just a reminder to all that when I'm typing this it could be read by anyone out there in the world who takes an interest.

quite scary really. We lapse into thinking we’re talking to the same dozen people


wait what? you mean anyone can read this stuff?
Click to expand...

I'm sure the FBI has an entire team dedicated to monitoring this hotbed of dangerous revolutionary thought.
C

As Leo has said, Starb has got quite a high powered job in DC now, he's on 100,000 dollars, soley dedicated to dissecting dissensus

shiels said:
.quite scary really. We lapse into thinking we’re talking to the same dozen people
Click to expand...

Exactly. Obviously I was joking with the specific questions I listed, but he did ask about people by name - he could be reading this...
Last edited: Jan 24, 2021

subvert47 said:
Once you've accepted that computers are best at chess, it's actually quite interesting watching them play each other. The main site for that is the continually rolling Top Chess Engine Championship...

Stockfish and Leela are currently playing their umpteenth final together.

But the very strongest program doesn't play anymore: that's AlphaZero, a self-learning AI designed by Deep Mind (now part of Google). They gave it the rules of chess, let it play millions of games against itself for nine hours... after which it was the strongest chess player in the universe ever

I like watching this players videos,she does a good job of showing how much better AlphaZero is/was and completely different playing style it developed.

i love the thought of all those anonymous millions who tune in every day to listen to my words of wisdom.

"i've come to think of him as the Father I never had" that's what they say.

great story. reading it back the moment he says "i think i can get the hang of this" definitely looked like he was softening you up for the kill. total deviousness though!

my theory is that only paranoid people are good at chess.

i think that the chess mindset is one which is supremely unhelpful in the game of life in which the only way to play correctly is love and compassion. as a trusting individual.

in chess you have to play all the time like someone is planning to kill you.

in geopolitical terms it's no coincidence that russia - the most paranoid country in the world - as it sees itself "encircled" by a coalition of western powers (most of whom aren't ACTUALLY often in agreement with another) produces chess masters.

also that the russians drink themselves to death with vodka as a rule.

five paragraphs there and each one of them is utter twaddle

There must be some reason why the Russians dominate chess so much though, right? There are far more Russians on this list than any other nationality, and many who aren't Russian are from elsewhere in the (former) USSR, or other once-communist countries:

It talks here about state sponsorship of chess under the Soviet regime: 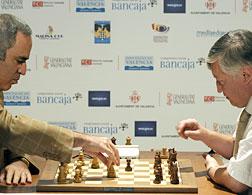 How did Russians get so good at chess?

Two Russian chess grandmasters, Garry Kasparov and Anatoly Karpov, faced off this week in a 12-game tournament in Valencia, Spain. As of this month,...

Stalin cared so much about his reputation as a chess master that he publicized a fake game in which he claimed to defeat party loyalist and future chief of the secret police Nikolai Yezhov. (Stalin later had him executed.)
Click to expand...

@Matthew - it could hardly be claimed that the USA is not deeply paranoid, could it?

It might be 'twaddle' in the actual reality sense but chess does represent that to me. Long term strategising. Setting traps and weaving webs. Dissembling. Every action considered and in service to a greater goal. Weighed for its advantages. Being willing to sacrifice members of your own party for strategic gains. A kind of detachment from the passions. The cold eye. Thinking in terms of territory and control. The Grand Chessboard of Zbigniew Brzezinski. The Great Game of Imperial Powers.

Chess represents evil and the use of men as pawns of other men.

on one pole you have deliberate conscious action, with all possible ramifications considered at the other pole, the spontaneous act, gratuitous and hopeful.

luka said:
Chess represents evil and the use of men as pawns of other men.
Click to expand...

@Slothrop won our first game and is making mincemeat of me in the second one, so I reckon he's probably a bit of a wrong' un.

Don't fall for it Sloth, he's setting you up

Mr. Tea said:
It talks here about state sponsorship of chess under the Soviet regime:
Click to expand...

This is pretty much it, AIUI - during the cold war, building a ruthlessly optimised system for training, developing and supporting professional chess players was a fairly cost effective way of demonstrating the fundamental superiority of the Soviet system over the decadent West, where chess was still pretty much treated as a game for gentleman-amateurs who found time to study chess in between some sort of academic work and/or alcoholism. And both the remnants of the system and the accumulated cultural capital are still influential on the tendency of former Soviet states to produce very strong players, although probably increasingly less so these days

luka said:
Don't fall for it Sloth, he's setting you up
Click to expand...