my dad was the main cartographer on this, pretty huge project!
F

No takers for 'De Beauvoir Town', then?
V

No Shacklewell either
B

in a way interesting how few people said hackney, ie how attuned to village mentality people in london are. on the other hand, i might have said haringey if someone had asked me outside my front door, so i guess it's not that clear-cut. Stoke Newington is like a spreading virus on that chart.

the area south of the canal always feels like a bit of a non-place to me (not in an especially negative way, but it was ages before i even really knew where haggerston was supposed to be)..
Last edited: Feb 3, 2012

It charts the choppy waters of The Great Ocean of Love. Accompanying instructions caution young lovers entering a relationship to “avoid the Whirlpool of Impetuosity” (located near the Silly Isles) which has proven the “ruin of many”.

Romantics are warned to avoid the Rocks of Jealousy, “a dangerous group on which ships have been frequently dashed to pieces”.

The route taken by singletons is also well charted: Bachelor’s Fort stands on the shore of an inlet known as the Gulf of Self Love. According to the map the inhabitants of the fort are “very domesticated and distinguished for their peculiarities”.

They know nothing of the landmass to their south, on which the Fort of Old Maids lies nestled between the Gulf of Despair and Scandal Gulf, near the Valley of Regret. However the map also charts less troubled waters, particularly around the Bay of Delight and the Cape of Good Hope.

In a somewhat risqué passage, the text informs us that for those who navigate the Settlement Isles, landing at St Bride’s Bay: “The Temple of Hymen attracts the attention of the traveller; this structure has been long celebrated, and is worthy [of] inspection.”

Thereafter they can choose to venture to the Fort of Felicity, between the Gulf of Sincerity and the Lake of Affection.

Or they may choose to round the coast to Cradle Point and Baby Fort . . . but it is perhaps advisable to drop anchor here as by travelling further, they may end up shipwrecked against the Mountains of Hatred. These are located a short distance from the Divorce Islands, the population of which is “considerable”.
Click to expand...

that Dalston thing is brilliant. surprised how many people said Kingsland.

benjybars said:
that Dalston thing is brilliant. surprised how many people said Kingsland.


Proper Harringay is Green Lanes from Manor House to Turnpike Lane, in my books. Or maybe not even that far, perhaps the junction with St. Anne's Road where it goes more residential.

It's an interesting exercise, anyway. 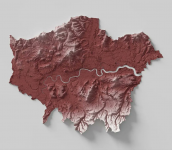