from the archive: Bob Dylan on tour, by Angela Carter, 1966​

Performing, he’s nothing but a shadow to look at, thin and black-clad and linear, a Beardsley hobgoblin. The little pointy face, so white it is almost blue in the spotlight, is shadowed by a baroque mound of curls. His gestures are harsh, angular and sketchy – insolent, asexual, frequently reminiscent of those of the Scarlet Hex Witch of the comic books. He seems at times to be sending up the overtly sexual writhings of the English pop stars of the new wave (ie Jagger).

Bang, bang, drums, organ, amplified guitar. He does a black and white devil dance clutching a black and white amplified guitar and you can hardly hear a word he’s singing. Maybe this is part of the plot. But it’s all right, ma, he’s only howling. Thus Bob Dylan, erstwhile Wonder Kid of Protest, demonstrated to packed and baffled theatres up and down the British Isles that he is approaching an artistic maturity of a most unexpected kind. Once, he was embraced by innocent liberals as a folk singer whose songs (The Times They Are a-Changing, Masters of War, The Lonesome Death of Hattie Carroll) pointed committed youth’s way to an understanding of the 20th-century predicament. And this predicament might be solved just by singing them. It was a comfort. People like comforts. But maybe comfort doesn’t finally help all that much.

Dylan is no longer comfortable. The fat-cheeked, Huck Finn-capped youth of the early records who dealt in idealism and excruciating do-it-yourself romantic imagery (white doves, mountains, seas, rainbows – and, for God’s sake, clowns) has grown up into the first ever all-electronic, all existential rock’n’roll singer. He’s singing for Kafka, Kierkegaard, Dostoevsky and all the boys down home on Desolation Row. 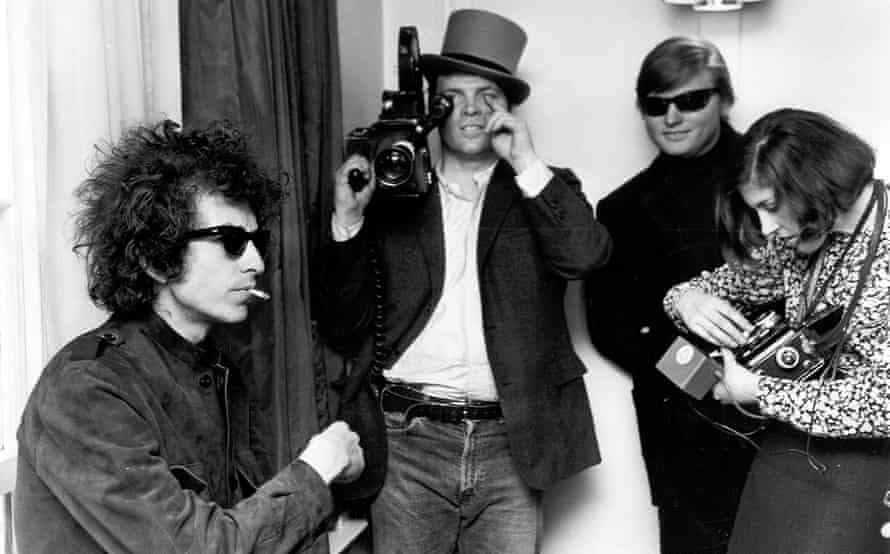 Bob Dylan on his 1966 tour of Britain. DA Pennebaker is in the background filming the documentary Don’t Look Back. Photograph: Michael Ochs Archives/Getty Images
His singing is exceedingly stylised. He never hits a note true. He chews vowels like ju-jubes. He cries like a wolf (or like Howlin’ Wolf). But what matters most is the songs. Which now have a tough urgency, a strained sense of critical involvement with 20th-century America and a kind of moral satire that is akin to Dean Swift and William Burroughs. Certainly, he’s still got a long way to go on a peculiarly harsh and unrewarding path; but his beginnings are spectacular. The best of the songs on his latest all-electric LP, Highway 61 Revisited, songs such as Like a Rolling Stone and Ballad of a Thin Man, have a mature savagery and a scary kind of wit that is new and extraordinary in music of mass appeal.

He has become a prophet of chaos and those who once accepted him as a blue-denim Messiah of a Brotherhood future once the times had changed may sense a personal betrayal. If not, then not. He attempted to pacify the old fans by doing the first half of his concerts in this country with acoustic guitar and mouth organ. As a matter of fact, Desolation Row sounds pretty silly without a beat backing and he seemed curiously apathetic and a bit lonely, all by himself on stage.

At Cardiff, the audience greeted the opening lines of Mr Tambourine Man with relieved recognition and a round of applause; he did not even give a thin smile in return but threw the song away as if he wished he could throw his harmonica after it. No introductions, no nothing. He scrambled through the troubadour of song bit.

He began to jerk into life when the group came on in the second half and the noise bit began. This Dylan is clanging and vulgar, neon and plastic and, at the same time, blackly, bleakly romantic. And exhilarating, akin to reading The Dunciad or a strip cartoon version of Wuthering Heights while riding a roller coaster.

Dylan is a phenomenon. He never used to be. The smug outrage of the “I hate Time magazine” attitudes of his early songs was easy and shallow, but there are no easy answers, no easy imagery. He’s on his own (like a rolling stone or like a Rolling Stone) and what happens now should be best of all. — London Magazine, 1966