They always find a way to monetise their crimes.
D

Jesus, just that fucking voice. Unbearable shouting blowhard. He reeks of dishonesty. Why does anyone take these fucking people seriously?
L

DannyL said:
Jesus, just that fucking voice. Unbearable shouting blowhard. He reeks of dishonesty. Why does anyone take these fucking people seriously?
Click to expand...

former crackhead. not that there's anything wrong with that.

Leo said:
former crackhead. not that there's anything wrong with that.
Click to expand...

Forgivable foible when it's a right-wing conspiracy theorist.

Well it's seen as a kind of redemptive story in his case... although watching him for a couple of minutes it's clear that he's sustained some serious damage to the brain somewhere along the way so I'm not sure that the facts quite bear out that narrative.
L

all of 'em are entirely full of shit

The Government Accountability Office has issued a damning report about the implementation of legislation supporting Ivanka Trump’s signature women’s empowerment initiative, from her time as an adviser to her father, President Donald Trump.

As Ivanka Trump traveled the world talking up the whole-of-government Women’s Global Development and Prosperity Initiative, deep problems were developing in the roll out of the bipartisan Women’s Entrepreneurship and Economic Empowerment Act of 2018 at the U.S. Agency for International Development.

While Trump touted her work as a delivering a cohesive program that enabled the U.S. government for the first time to “rigorously track the execution and the efficacy of the money that we are spending,” the GAO’s 14-month audit demonstrates that, at least at USAID, there were extensive failures during the Trump administration in both the targeting of WEEE Act money, and measuring its impact.

USAID was unable to conclusively say what proportion of the WEEE Act funds went to the very poor, and women-owned and managed businesses. Shockingly, the agency couldn’t even define what actually constitutes a business owned and run by women, the GAO concluded.
Click to expand...

Wouldn't be surprised if he did though

Seems they've just discovered a new way in which Trump robbed his supporters. Turns out that if you donated to his campaign before the election you had to fill in a form to authorise the debit. Hidden at the bottom among a load of small print was a small box which you had to tick if you DIDN'T want the donation to keep recurring. Many of course failed to spot this - not surprising cos you weren't supposed to - and ending up giving way more than they intended. Apparently they've paid back a load to avoid more legal trouble but... the guy just can't help himself can he? He robs for the sake of robbing... if he sees someone is vulnerable he simply has to fuck them over, even if they're supposed to be on his side and it will ultimately end up hurting him. He's just such a massive massive prick in every way.
L 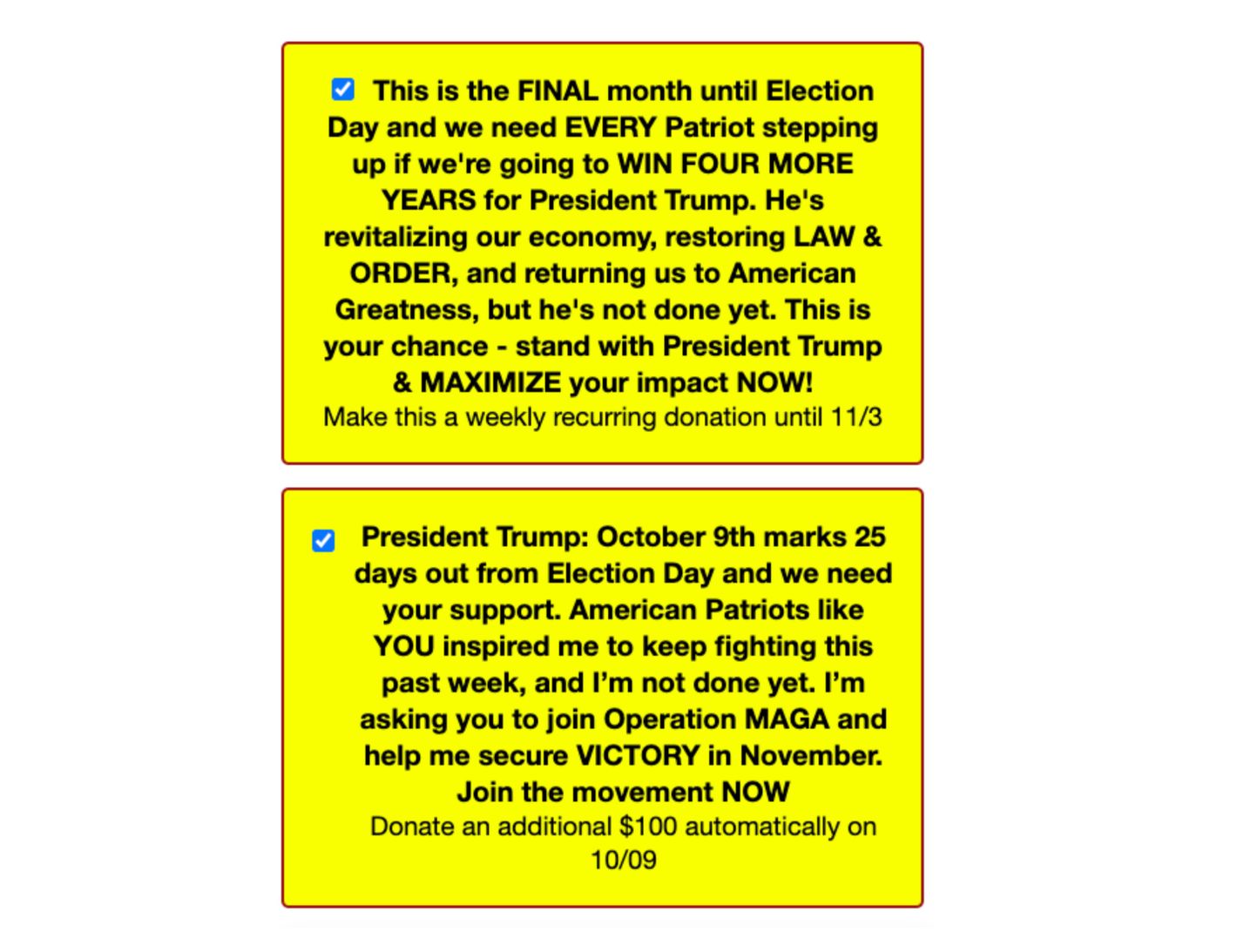 Ha yeah.... but I didn't mention that second trap which kindly doubled your donation without you having to take the time to do it if you didn't stop it.
L

IdleRich said:
Ha yeah.... but I didn't mention that second trap which kindly doubled your donation without you having to take the time to do it if you didn't stop it.
Click to expand...

and then, just for the hell of it, "donate an additional $100 automatically on 10/09". as if the reoccurring monthly grift isn't enough.

But for some Trump supporters like Ron Wilson, WinRed is a scam artist. Mr. Wilson, an 87-year-old retiree in Illinois, made a series of small contributions last fall that he thought would add up to about $200; by December, federal records show, WinRed and Mr. Trump’s committees had withdrawn more than 70 separate donations from Mr. Wilson worth roughly $2,300.

“Predatory!” Mr. Wilson said of WinRed. Like multiple other donors interviewed, though, he held Mr. Trump himself blameless, telling The Times, “I’m 100 percent loyal to Donald Trump.”
Click to expand...

Yeah I'm sure one of his employees put that in there without his knowledge. Trump been made to look bad through no fault of his own. Again.
L

seriously, when you think of the scale of his grifts, he's got to be among the biggest con men ever.
Last edited: Apr 4, 2021

He can't help himself, it's just what he does.
L

Donald Trump may be a man with a very limited set of talents, but he has learned to apply those talents to masterful effect. His talent is to employ shameless lies to create an image of himself in the media, and then use that media to bilk people.

Typically, a grifter runs up against the limits of public knowledge: Once he is exposed, it becomes progressively more difficult to find new marks. But here is where Trump’s particular genius exceeds all who came before him, and allowed him to operate his scam on a world-historical scale. Trump has always attracted so much media that any particular exposé of his crooked deeds is overwhelmed by the cacophony.

Trump has been operating like this all along. His business hires contractors and then — by the hundreds — pays them half the promised fee, or nothing at all, knowing it can just find new contractors to unwittingly work for the famous Donald Trump. He bilks his fans into buying expensive vitamin scams, or investing in a casino that he loots, or signing up for expensive courses where the instructors take the students for all they’re worth.

Trump’s political career was — or, more pessimistically, is — an extension of his grifting career. He recognized conservative media as the perfect vehicle to identify a new and vast collection of marks. He ran as a populist and used the trust his voters placed in him to govern as a plutocrat. All the promises of restoring the factories that disappeared in the 1980s simply gave way to another tax cut for the rich.

It is a testament to Trump’s grifting genius that his victims continue to venerate him. Goldmacher’s story contains this utterly perfect sentence, describing one of the victims who was tricked into giving the campaign more than ten times what he intended to donate: “Like multiple other donors interviewed, though, he held Mr. Trump himself blameless, telling the Times, ‘I’m 100 percent loyal to Donald Trump.’”

Almost every confidence artist has had to flee from his victims after they realized the trick. Trump may be the greatest con man in history. His victims still adore him.
Click to expand...

They saying that at its worst moments the Trump campaign was responsible for THREE PERCENT of credit card fraud claims in the whole funking US.
P

Leo said:
all of 'em are entirely full of shit

Some people just have to burn
L 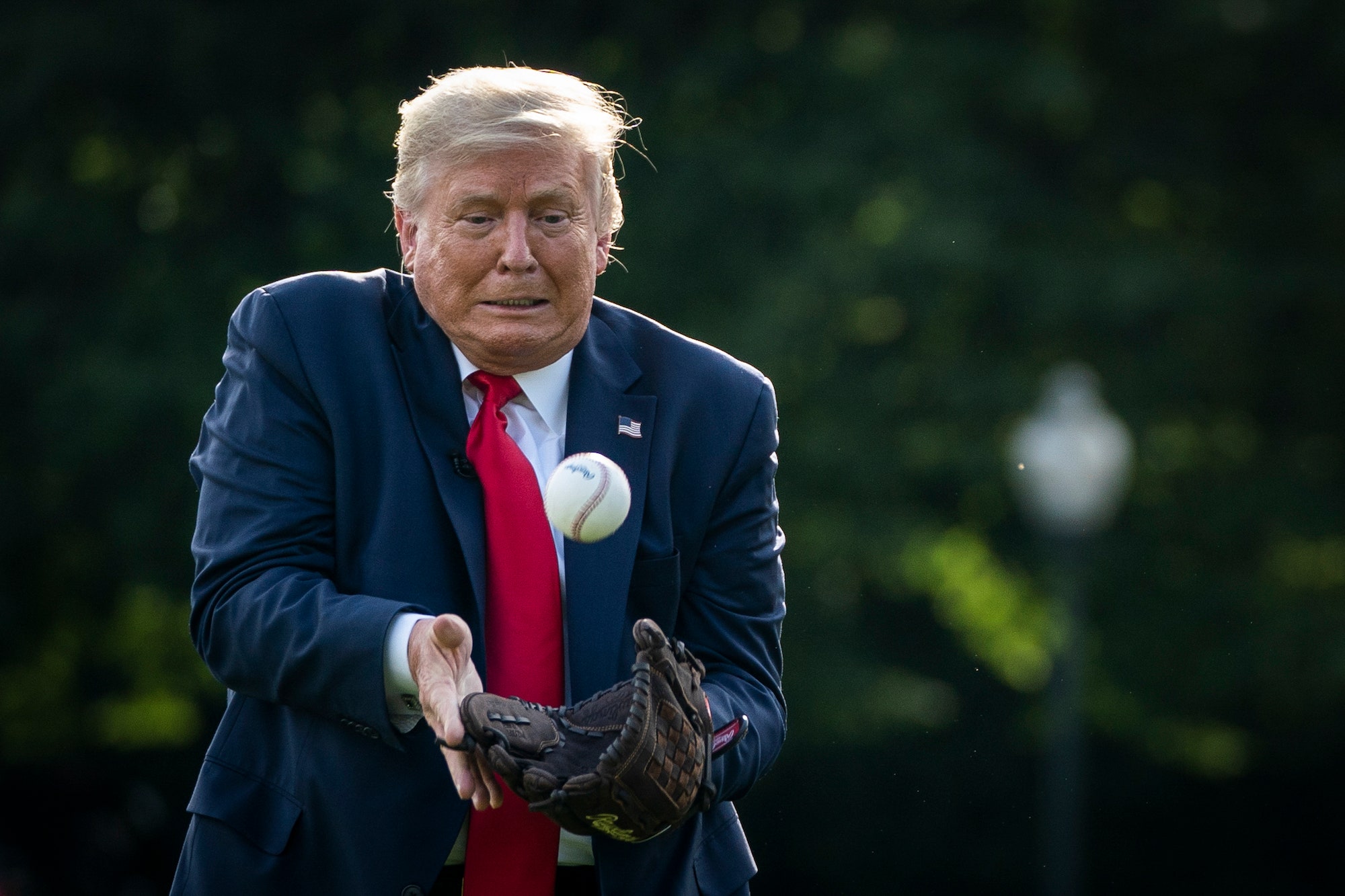