Leo said:
Trump Organization and CFO charged with fraud and tax evasion. This will either kill him and make him an unstoppable martyr to millions.
Click to expand...

Or what? Don't leave us hanging.
But this looks like fairly small beer doesn't it? The Trunp organisation is claiming that they are being prosecuted for something they don't usually bother with - which seems to be a defence based "we did it but so does everyone" guess the idea is to get the guy to flip but he looks like he's gonna fight it... hopefully just the first skirmish in the upcoming total unholy war...
L

Trump is suing fb and twitter to get his accounts back.... but the best thing is that he's built a fake white house in front of which to give his press conferences. 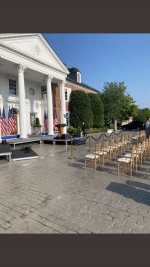 We want the routers sonny!

As an aside, I do not like the American pronunciation of "routers":

At frst when Trump was gone and people said "you will miss him" and I thought to myself, no way, however entertaining I am just so glad to see the back of the thick cunt. But actually, it's the best of both worlds, at the moment when he is just a totally ineffectual, increasingly mad whining old donkey it's just brilliant cos you get all the stupid stuff, but, it's increasingly harmless, it's just the fun bit, I am really enjoying watching him falling further and further apart like this.
L

Just weeks after its launch, the pro-Trump social network GETTR is inundated with terrorist propaganda spread by supporters of Islamic State, according to a POLITICO review of online activity on the fledgling platform.

The social network — started a month ago by members of former President Donald Trump’s inner circle — features reams of jihadi-related material, including graphic videos of beheadings, viral memes that promote violence against the West and even memes of a militant executing Trump in an orange jumpsuit similar to those used in Guantanamo Bay.
Click to expand...

TBF, eagles have been used in heraldry and on flags since forever.
L

personally, I'm going to hold off on ordering until get the arm bands. 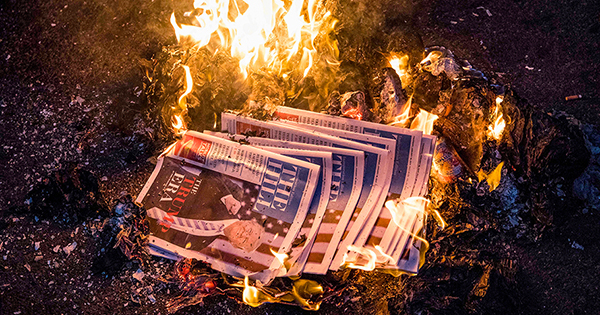 Well not for long cos it's your lucky day - according to the ancient prophecy, passed down by the angel Michael* to Saint Ron of Watkins - August 13th is the very day that....
He will be reinstated into his rightful place on the iron throne, behind the legendary desk of beans, in the Oval Orifice at the very centre of The Shite House, he will be given dominion over Dominion, and he shall be granted power over The Whore of Babylon, Mother of Prostitutes and Abominations of the Earth with whom the kings of the earth did commit fornication, and verily he shall lock her up and cast her forever into the pit where there will be a wailing and a gnashing of teeth.
He will order his soldiers to march six days in a row around the country of Mexico, and on the seventh day they will march seven times around Mexico and then the priests will blow their trump-ets and the Americanites will give a mighty shout and finally the Great Wall of Mexico will be builded.
But he probably still won't get round to announcing his health care plan.
And when he comes into his kingdom he will smite his enemies mightily and he shall smite them and smite them again. The unbelievers who did not have the faith to accept without evidence that the election was stolen will flee and they will beg for the sky to fall and cover their shame, and the fact checkers who dared to question his lies will cry for the sea to rise over them and hide them, and the great Demons known as Twitter and Facebook will beg the Lord Trump to come back on their platforms, but he will just make his own one that many people will say is the best one, and from the Angel of Death who is also called Kraken there can be no escape.
And on that day Beelzebub the Lord of Flies who is married to his mother and who beareth the foul name Pence will be torn apart by a crowd made up of the most righteous of Trump's followers such as the Proud Boys and the holy fools Marjorie Taylor Green and Lauren Boebert, for Trump will inspire and incite them to rise up and fight, and he will do it really well, even though he has never ever done anything even slightly like that before, it's just that it will turn out he has a natural talent for it.
And those who followed the Beast whose name is Biden and whose number is not 46 but 666 will feel pretty silly.
And from thence forward Trump in his glory will grab whatsoever he so pleases, yeah even unto the pussy and a great light will shineth from his ass and it will cureth the China pestilence and no-one will need to wear a mask and the stock market will rise bigly and tax will be cut even biglier and many people will be saying that it is the greatest reign of any president ever and his (and Putin's) will be the power forever and ever, amen.
So endeth the revelation of Saint Wood the Fucking Nuts, he who has ears, let him hear.

no fuck off with that dude, i just miss him.

he should have a tv show but you must needs be admit it would be Mad Funny and Fitting For The U.S. if he served two non-consecutive terms (because the democratic party has learned nothing from his administration)

other_life said:
no fuck off with that dude, i just miss him.
Click to expand...

Is this just general nihilism, or are there things about him that were good?

he was mad funny