I read it yeah. Pretty strong.

DannyL said:
Did you see Hyde's piece about being shouted at in the street by some random POS bloke? The day after the Sarah Everard vigil while picking up her kid. That had more bite than normal.
Click to expand...

Pertinent to some of the things discussed in this thread:

During his lifetime, Balzac’s debts were as famous as his novels and more widely discussed than his love affairs. Money was the great unifying subject of La Comédie humaine and the legal and moral …

Reading Illusions perdues now it is easy to see it simply as a cautionary tale of a writer trying to make it in the big city, or to defuse it in the way that contemporary critics did as “a satirical view of the Parisian book trade” — or, perhaps worst of all, to enervate it using the jargon of contemporary critical theory as a “reflexive novel” (26). I mean, it is all of these things, but the energy and relevance of the book resides in its violently offensive qualities and Balzac’s willingness to expose the vanities and delusions of his own world. This is fissile material because the rivalries and motivations and the conditions of writing and publishing that Balzac describes still exist, but with updated variations and innovations. Balzac’s social networking among the literary and aristocratic elites of Paris, the control he attempted to maintain over his own image, the money he spent on champagne, tailored clothes and elaborate canes “of gold or rhinoceros-horn gleaming with precious stones” (27) foreshadow the marketing demands made of writers today: the need to publicise yourself on social media, to develop and protect your brand on behalf of publishing agents, in order to secure future work. Meanwhile and miraculously writers remain infatuated with their own profile, a situation intensified and limited by the very social media platforms they depend upon for success. In the same way that Lucien discovers, too late, that he is not really free to write what he thinks, writers today find themselves captured by the social and rhetorical limits and expectations of their niche publics. They must be careful what they write or say on all occasions and across all platforms to avoid losing their constituency of readers and allies and, indeed, prospects of work. At the same time they also need to provide a consistent stream of topical commentary, however unnecessary or perfunctory, in order to maintain visibility; ideas and opinions, in this context, do not really exist for their own sake, but to advertise and protect the position of a writer within a social and professional network, just like Restoration Paris. Finally, payment remains precarious, with writers being exposed to similar exploitations and temptations as Lucien in 1821, and being forced to find income streams anywhere they can like Balzac throughout his own career. Over this whole pitiless landscape hovers the grey clouds of publishing schedules, portfolios and KPIs.
Click to expand...

love how mainstream media depict pot in their illustration... 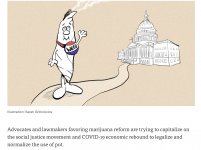 Noticing NYC streets being esp. fragrant by this week !
L

I haven't smoked in years but nice to see it's legal.
L

On Ted Cruz:
It’s no secret that Ted Cruz is pretty much universally loathed. (Boehner writes, “Even Mitch McConnell hated Ted Cruz with a passion I didn’t know Mitch had in him.”) Boehner says of Cruz, “There is nothing more dangerous than a reckless asshole who thinks he is smarter than everyone else.”

On Bill Clinton:
Boehner says Bill Clinton was a fantastic talker, though he could be too slick for his own good. “He could steal your watch right in front of you and you’d be grateful when he told you the time,” Boehner writes.

On Mark Meadows:
Following a failed attempt to overthrow Boehner as Speaker in 2015, Representative Mark Meadows — a Freedom Caucus founder who would later serve as President Trump’s chief of staff — came to Boehner’s office and got on his knees to beg for forgiveness.

“I hadn’t expected to see a grown man huddled on the rug at my feet,” Boehner says. “So I did the only thing that came to mind. I took a long, slow drag of my Camel cigarette. Let the tension hang there a little, you know?”

While Boehner eventually gave Meadows a pass, he adds, “I knew he was carrying a backpack full of knives and sooner or later he’d try to cut me again with them.”

On Nancy Pelosi:
“Nancy Pelosi has a killer instinct and may be the most powerful Speaker ever,” Boehner says of his successor. She understands power, knows how to use it, and rarely “leaves fingerprints.”

Boehner illustrates this point with a story about when, in 2008, Representative Henry Waxman ousted the powerful and much-feared chairman of the Committee on Energy and Commerce, John Dingell, thanks in large part to Pelosi’s work behind the scenes. She had “gutted Big John Dingle like a halibut she found floating around the San Francisco Bay, then calmly sat back and had a cup of coffee,” Boehner says.
You must log in or register to reply here.
Share:
Facebook Twitter Reddit Pinterest Tumblr WhatsApp Email Share Link
Top