i rate some of this stuff. i just dont like the stupid campy vocals. david tibet wittering on about primal dread or something, coil doing a stage whisper about mystic owls. can do without that. basically talking about the music discussed in englands hidden reverse.
Nurse with wound records often sound really good but hes got a nerds sense of humour which can ruin them for me a bit. coil when theyre instrumental is good. i really like time machines. i really like all that tunnel of goats stuff. both groups create good immersive atmospheres. 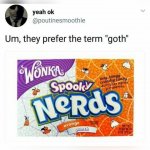 obviously they look awful as well which is off putting.

i like how you can listen to a youtube playlist of the entire nurse with wound list now. internet democracy. levels the playing field. love it.

stapleton disowned this record and called stereolab a bunch of lightweights so for that reason it's my favourite
https://www.youtube.com/watch?v=lSychSVOSaI

in terms of cultural capital coil stocks are definitely highest from what i can tell. throbbing gristle too although porridge's reputation is probably soiled beyond redemption. just seems like a sad clown now.

I hear GPO has had a touch of the old leukaemia lately, hope s/he pulls through.

its not a trap

I'm actually not very well versed in it. Got a bunch of TG albums (by no means all or most of them) and saw them at their last ever gig. It's interesting and challenging, not stuff to listen to casually or often, of course. I strongly suspect it's music you had to be around for at the time to really get just what was so revolutionary about it (though you can probably say the same about jazz or early hip-hop or any kind of music that's revolutionary in its own day). Having said that, plenty of it is still pretty shocking and arresting today - listen to Hamburger Lady and tell me it isn't the creepiest thing ever recorded.

I think this is why Gen pretty much packed in industrial music after TG split and concentrated on dance music and psych-y pop-rock, because as far as he was concerned industrial had run its course.

There's some cool Coil stuff but I've barely scratched the surface of their discography. Chris and Cosey did some good later stuff but from what I've heard it tends more towards slick synthpop so can't really be bracketed with what you're talking about here. No idea about Current 93 really. Cabaret Voltaire were good, if they belong here, also went off in a very acid house direction in the later 80s.

John Eden has surely forgotten more about this scene than I know about it, so don't set any great store by my words. I think I saw him at that TG gig and waved, but he ignored me because he thinks I'm a tiresome fool.
Last edited: Mar 1, 2018
M

Current 93 are very silly, even by goth standards. Best thing they ever did was Side 2 of Nature Unveiled (or whichever side it is that has Annie Anxiety speaking in tongues at the start), but they pretty much ceased to be 'industrial' (or listenable) after 'In Menstrual Night', when Tibet apparently received the misguided revelation that he could sing, or that the world needed a Death In June MkII, albeit with cryptic lyrics about missing cats and Noddy.

To me, Coil were two separate groups: the urban 80s/early 90s in-your-face gay occult disco merchants, who ruled, and the bunch of knackered old rural fairies who sullied the early 2000s with a load of pre-Ghostbox crap about broccoli and night elves that excites dad bloggers so much. 'Scatology', 'Horse Rotorvator' and 'LSD' are all you really need. 'Time Machines' is OK but I'm very picky about drone since hearing 'Chaotica' by Tom Recchion. Sadly, they are proof that dabbling in the dark arts often leads to penury and death by misadventure.

NWW records are amazing just for the artwork alone, though I kind of went off him A BIT when listening to some of those 'NWW list' records and realising he ripped off huge chunks of them. Not just samples, but whole sections of music got lifted. That said, I'm glad he's still churning them out and frustrating record collectors with limited editions of 23 with silkscreen covers that go for £500 on Discogs.

Obviously only a complete loser would listen to Muslimgauze. Psychic TV were OK, sometimes, I guess, but as an ex-cat lick, I never really got into magick - been there, done that with real saints. Everything TG did between 1975-1981 was amazing and even that rubbish comeback album they made couldn't destroy that.

"I think nearly everyone in this genre or into it is fucked up or damaged in some way" - Kevin Tomkins, Sutcliffe Jugend

I kind of went off him A BIT when listening to some of those 'NWW list' records and realising he ripped off huge chunks of them. Not just samples, but whole sections of music got lifted.
Click to expand...

a gateway drug in as much as it serves as introduction to particular techniques and conceptual approaches.

I think you are right about the vocals, Luka. They were definitely a product of the "anyone can do it" punk ethos which was BAD.

The stuff that has aged the best was instrumental and also less wedded to overt philosophy/spookiness. These days I would listen to things like Organum and Nocturnal Emissions more than TG or Coil. All of them suffer from huge discographies though so you need to pick the best bits.

The Lemon Kittens remain worth a go and they have vocals...

I've only seen TG once (at Village Underground) and I don't remember Mr Tea waving at me. He's quite good IRL so I probably would have said hello. I ended up standing behind some twats in Death In June t-shirts so possibly wasn't in the best of moods.

I think most of what I got out of industrial music I no longer need or can get from elsewhere.

Nurse With Wound: Homotopy To Marie, Soliloquy For Lilith

luka said:
a gateway drug in as much as it serves as introduction to particular techniques and conceptual approaches.
Click to expand...

That's true, but there's always a thin line between that and becoming the DJ Shadow of the psychedelic underground.

IIRC, Woebot slated him for plundering some African record he (Woebot) was fond of (well I guess both of them were...)
C

Admittedly I'm incredibly biased against the TG camp because I consider all of them except Chris Carter loathsome people (he mostly escapes my judgement because he's too much of a nerd. You get the feeling if he hadn't fallen in with them he'd be like a Special Effects Guru for movies who people regarded as 'odd but decent'. Truly built to live in a basement.)

Admittedly a lot of my dalliances with this comes with "Second Wave" or whatever stuff like Ministry b/c y'know, born in 89 and what have you. Al Jourgenson admitting in his book that he stole all the techniques he learned from Adrian Sherwood and then proceeded to use them as A Producer in the proper sense and not just vapid delusions of being the white Lee Perry. I respect that more than the sea of COUM performances or what have you.
M

SPK: Information Overload Unit / Leichenschrei /Auto Da Fe - adds the whole 'Videodrome'/K-Punk element to the 'scene'...dripping with Cold War paranoia, disgust at the human form, car-crash cadaver/porn star mash-ups - all while being as noisy, narky and alienating as possible. Ended up as a dreadful synthpop act and then scoring the theme to 'Nip and Tuck'.

Cabaret Voltaire: The Living Legends - the albums were good, but the short-burst single/EP tracks were brilliant. All the conspiracy weirdness of TG/PTV without the 'psychic youth' lifestyle crutch. If all white reggae was like 'Silent Command' I wouldn't have an issue.

Nocturnal Emissions: Drowning In A Sea Of Bliss / Befehlsnotstand - John chose a softer ambient one, so here's their two major noisy works. Like hurtling through a Bladerunner-style, undeveloped, early 80s Docklands, complete with US army propaganda, clanking robot rhythms based on shield/baton riot police taunts, lab monkey screams mangled into ungodly feedback - and then sudden bursts of early hip hop. Stunning pair of albums. God knows how many hours of grim documentaries these people had to sit through to get the range of samples of extreme right drill sargeants, Christian ex-junkies, emotionless surgeons.

john eden said:
I've only seen TG once (at Village Underground) and I don't remember Mr Tea waving at me. He's quite good IRL so I probably would have said hello. I ended up standing behind some twats in Death In June t-shirts so possibly wasn't in the best of moods.
Click to expand...

Seconded on the Neubauten, they were great, very innovative. I like Drawings of Patient O.T. - all power tools, found objects being bashed together, skronky post-punk guitar/bass and Blixa B chanting and whispering like he hasn't slept in a few days. Though I dunno if they have any particular connection to the UK weirdo scene beyond the 'industrial' label.