luka said:
Borrow the one I sent @IdleRich hes never read it
Click to expand...

That's where you're wrong actually.
I'm not gonna ask someone to send me some of their work, all the way to another country, and then not even read it.
And anyway, I can't send them cos I threw them both away years ago.

linebaugh said:
I could but thats no fun
Click to expand...

How's this for an alternative? Start a publishing house and make a quarto edition of prediction tablet your second release.

green glazed knot in the water ridged meniscus
submerge and reappear in subtly rearranged
universe. other light ratio other emphasis
of air. hereditary invasion italic sprite
gabled obtuse to flow pitched against
The CURRENT.
Meet and greet grope for common ground
every grotesque is a diary entry
an irritant in the memory
a regret
a grievance a grudge against grim time.
seal it off/airless chamber of wax beauty/breathe
elsewhere lest it decay.
keeps coping what conflagration keep us
distance purge again again.
sentence set radially rainbow o the whole round
dirge pack piano action turf parade now
crash-land in a place which heretofore never existed
branches break birds escape screeching considerable
tumult. dandelion birch the larch the vegetation
growing inside the crook of car tyre
the oil on the puddle the precipice overlooking
the other world.
feeble bone fraction crone rise
babel dawn chorus speak defect tan treble tone tap to
root gather grouper gasps in other media the ticker
tape of scrolling headline frogmarched from a to b
heath vetch gorse flower vetch beech.

vision this fierce fleeting fast nerves pitched to
terrible sensitivity registering each tiny
fluctuation in conditions so meadowlark pipit
so spirit of wind so sweeping west over the total
plateau so you believe it even so you feel you
can catch it, hold it to the chest in a violent
tenderness. scupper planning permission squander
certificate injunction squall of the bounty wasted
curse of cursing cursed.
dare you cross that
threshold panic at the limit
botch it all for want of courage and determined
faith. is that it? responsive
evading the thumb carrier cattle transmit perch
grave needle grave settle passage hill tomb break
at extreme east crossover into other
asthma cheated slump habit dump hex forsaken intent
the same mistake indefinite return.
quail, insipid prayer admission of defeat no nothing
left to lean on emptied out. geese in lachrymose
grey skein.
mist pouring out the grate, along the
gutter, groping for another, searching for a second,
the condition of total loss.
S

it's my full name at gmail, not just first but last ("reason")

Well I've sent something to someone
S

It's an amazing photograph
S

Looks like she's a dentist maybe you can seize the opportunity, write some poems for the walls of her office, at hefty price

Dream in which Bobby Bisto was my handler in some sort of psychic intelligence agency which investigated objects which were conduits for paranormal forces, but I'd received a postcard depicting the first object I was to look into and it was his typewriter.

NASCENT COSMOS
startling. the green penumbra, catheter
zero, cowed pasture and the forest rising
at quite a clip. Then, rain sudden and
hilarious cool irridescent uproar prickling
the scalp like sherbert. Our canny investor
made a packet, inserted at a nifty angle,
with his usual eye for the improbable chance,
and his shirt pocket full of pens.
Here,
will it, say it to me, stay with me
on the warm plateau, langourous air
moving, humid with fertility and 'ripe'
with promise. Your swollen orchard,
denatured and cackling.
I dithered just long enough to lose her.
In the slipstream of fond regard,
nostalgic for toffee-apples and television.
We
pull on woolen jerseys,
cantered to the
kite-meadow where
hurly-burly autumn disabused us.
Seeded memories of burdock,
canisters of laughing-gas, and abrupt loss.
And that
was all there was, raise the anchor,
Hamish, and we'll be off.
Last edited: Oct 4, 2021

My vegetable love should grow
Vaster than empires and more slow;

To His Coy Mistress by Andrew Marvell | Poetry Foundation

Had we but world enough and time,


The Time-Membrane shudders and and warps, ruptures, and
the past leaks through, and we brush against them, these others,
who also walked these streets and loved this river, boon companion,
this bustling air, these autumnal regrets and pearlescent skies.

Who walked this way as we do,
who, unlanguaged and abandoned,
thrown ashore, without return passage,
in an unfamiliar climate, insinuating fog and the damp
clinging to the flesh. Lascars, say, sailors from the Bay of Bengal
or Gulf of Aden. We huddle with them
in some narrow doorway, seek shelter from the wind
and the hostility of strangers. In Poplar
where the East India men spend their wages,
by the docks where the masts make floating forests
and the rat-feet skid
on greasy cobbles.

The river is an arm of ocean, and, while reaching inward
also extends outward, off-island, where the trade winds carry us
and the gulls swoop on burly air. We feel the 16th century
crash over us, briny wave, carrying with it
its tobacco and tumult. The earth made so much wider then,
new continents painted fresh upon the map, the prairies
and those who peopled them. We see the boatyards
at Deptford and Rotherhithe
and we are also bunked in forecastle, storm-tossed, and we, in that
Tempest wrecked and cast ashore, air, enchanted music, Ariel
and wonders, tossing peanut shells to theatre floor
as our actors strut and fret their hour
upon the stage.

London is the place for me, as we alight at Tilbury
bilious river and foreboding skies and the city still in ruins.
Hopes in a suitcase and dressed in Sunday best. And we hear
the words Elizabeth spoke, also at Tilbury, where Kitchener sang
words rang strident I have the heart and stomach of a king
and a king of England too
before the beacons burned and the storm swept in, wild winds
and fire ships.

We see, in scrying mirror, Dee at Mortlake, wide river
and see also Marlowe, bleeding out on the stone setts, and
the words went with him, Faustus and Tamburlaine.

We see on the narrow beaches of broken terracotta and animal bones,
votive offerings, as all rivers tangle hands and Thames is also Ganges,
gods washed up here and coconut shells
curses and blessings carved on stones
committed to the waters and we are
there in the Kabbalistic backstreets of Whitechapel, there
with the Huguenot weavers, there
with the displaced and fled in fear
there with those escaping poverty or oppression,
those escaping war and famine,
there with the Gujaratis of Kenya and Uganda,
there with the freed slaves and the desperate,
and all languages mingling and tangling, caught
and knotted and love also
as promiscuous and entangled, together
all times coeval and confused, and all cultures.

Song on the streets, rough music, and drunk, spilling
out of taverns and into midnight all musics also mingled
and entangled, as all foot-patter and foot-tread
makes polyrhythms, intricate as rainfall

and before the city dreamed itself, and people passed this way
the river drifting into marsh, and the herons hunting
eels lithe and muscled, and the voles in their burrows and
wind sussurating in the reed-beds. Before the city dreamed itself
before Rome established the limits of its empire here, westward bound
of that dominion, before the first churches raised their steeples, before
the cathedral was build on Lud Hill, before fire razed it
and Wren rebuilt it, before bombs fell and sirens scoured the night
before we were born and walked it
feet upon the ancient stones.

can feel the David Jones vibe in this one.

its nice to write straight. maybe i prefer it. maybe i will go straight.

i love these port poems, reminds me of a dino campana poem. let me look it up 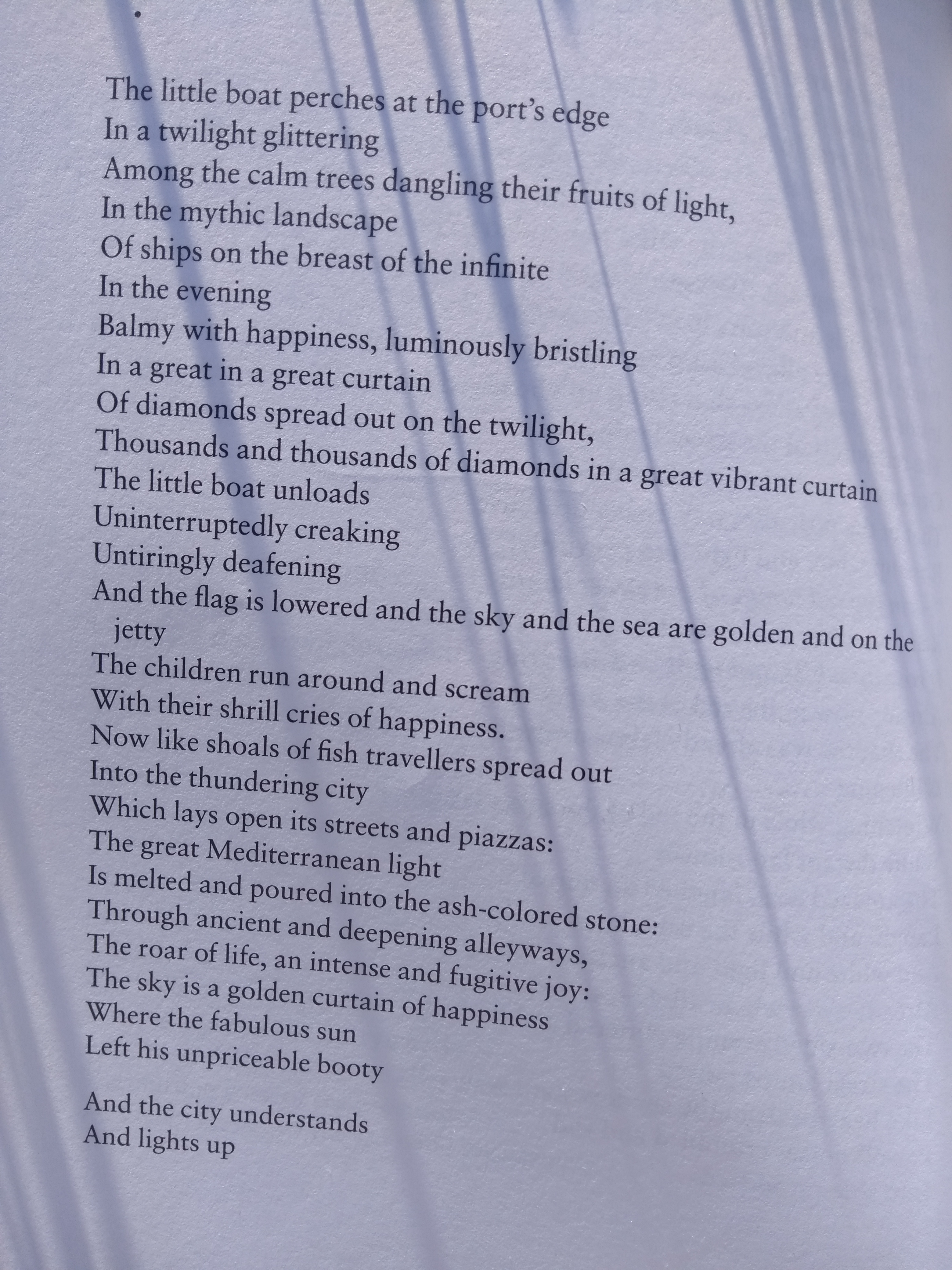