Clinamenic said:
The voice as a more primordial identifier than a name.

Or even the appearance of an object/organism. Electromagnetic waves or certain frequencies being picked up by our photo-receptive wetware and filed away.
Click to expand...

yeah. my quantum mechanic was saying the other day the interesting thing about names is like eg you get a trans person and they change their name from Stan to Stacy. Then to Claire, then Monique, then Abigail, and his point wasn't that the trans lot are fickle but that once you change the unchangeable it can be hard to find solid ground again

Thats a great point, almost like you are looking for something you can't see through. But in the act of changing a name, one realizes how arbitrary they can be, how the ostensible bases of our realities can be as fragile and transparent as glass.

This is what I have in mind when I say that meaning is an artifact of consciousness.

And so is the absence of meaning an artifact of consciousness. This is how to get past nihilism.

Clinamenic said:
I just learned that the origins of writing, or at least presumably the earliest instances of writing discovered so far, were in accounting. Mesopotamia. Pictorial representations of commodities, as in a primordial balance sheet.
Click to expand...

version said:
The emphasis on letters and language rather than what's actually being said immediately calls to mind McLuhan. There's that older guy running the archaeological digs who says he doesn't care what's actually being communicated on the stones he finds because it's usually just bookkeeping and what's really important to him is the letters themselves, the shape of them, how they were carved.

I've read a few interviews with DeLillo where he's said that was something which took hold of his writing from The Names onward. He's since paid particularly close attention to how the letters look on the page and chooses words and sentences accordingly. 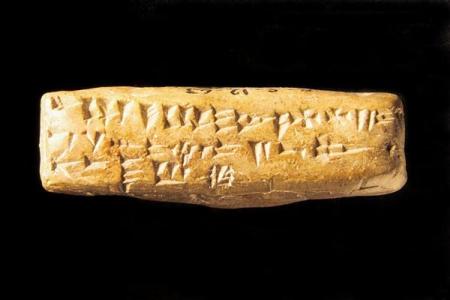 "What do you find on the stones, Owen, that's so intriguing?"

He stretched his body, easing into an answer.

"At first, years ago, I think it was mainly a question of history and philology. The stones spoke. It was a form of conversation with ancient people. It was also riddle-solving to a certain degree. To decipher, to uncover secrets, to trace the geography of language in a sense. In my current infatuation I think I've abandoned scholarship and much of the interest I once had in earlier cultures. What the stones say, after all, is often routine stuff. Inventories, land sale contracts, grain payments, records of commodities, so many cows, so many sheep. I'm not an expert on the origin of writing but it seems to be the case that the first writing was motivated by a desire to keep accounts. Palace accounts, temple accounts. Bookkeeping."

"Now I've begun to see a mysterious importance in the letters as such, the blocks of characters. The tablet at Ras Shamrah said nothing. It was inscribed with the alphabet itself. I find this is all I want to know about the people who lived there. The shapes of their letters and the material they used. Fire-hardened clay, dense black basalt, marble with a ferrous content. These things I lay my hands against, feel where the words have been cut. And the eye takes in those beautiful shapes. So strange and reawakening. It goes deeper than conversations, riddles."
Click to expand...

It's one of his best, imo. Gus liked it too.

I didn't think you liked DeLillo at all.

woops said:
annoyed to miss that reading
Click to expand... 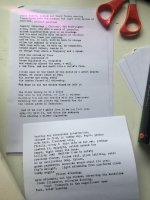 The master at work

i had a window to look out of. trees. birds. sunlight. a novelty for me.
S

You have a good face, it reminds me of Thom Yorke
S