its cos i knew how much you would hate that remark, it was a clever insult

A Thing May Exist (dead sea scrolls) but be Outside Culture altogether. An Unexploded Bomb.
Sometimes its Existence may be inferred from its Absence. At this point it can be Created.​

man walks out the swamp.

voluble tree birds
in the lark park
in the battery acid

in the green guts of the river.

where fishes swim.
under willow
where pheasants drink.

actions which crystallise into ritual. back in the world again. embodied.
eat bread. drink wine. plough furrow in time.
The bread and the wine symbolise the willing acceptance of the deal. Embrace material conditions. green mesh. The flesh, the blood, the need to eat. The body, the Gnostic hell.
Every time the body is left, the ritual of return must be enacted. Thank you for the flesh. For the blood which surges, the rivers of blood which transverse the body. The machine, the avatar which negotiates the material world. Only through the avatar can material conditions be altered.
Only the machine can act in this dimension.
Delicate polar flowers, quite unknown to science, bloom once every 5 centuries. Cornflower blue petals assume the shapes of snowflakes, exhibiting the same degree of beauty and variety.
Polar bears lick them for salt.

The valley is full of statues, of unknown antiquity. They have always been here. Mighty monuments of basalt. Moss in the eye sockets, beards of lichen.
Egrets perch on the heads of monarchs, sit in the laps of gods.

THE EARTH IS ALREADY IN SPACE
Bandit tribes parcel out the forest, the dense wood, the foothills and mountains. The toxic wastelands, the poisoned earth. Colonise the wilds, make home in the inhospitable, the unnavigable, hostile unconquered hinterlands, as Celts survived among mountains and extremities. As anything dangerous exists, in mountain fastness, and dense and seething jungle.
Here we lay our bed. Here, we consolidate our forces, here we plot our revenge. Here we sit and accumulate power. Here we make pacts with powerful allies. Here we gather our strength.
SEA GIVES BIRTH TO VOLCANO!
A volcano rising from a boiling sea. The sky is black with ash, the sun blotted out.
Somewhere else, something else happens.

Trees like upturned crabs shadows on the sides of the houses
sharp cut silhouettes stand against sunset
the shapes of fern and palm tree,
the hooting of excitable birds.
Track-
this,
play of perception.

All Awareness.
Isle of Ibises.​
The sight which snags the eye,
the voluptuous thought.

Sight and Insight.​
How gardens come awake at night
whisper to one another.
Unpeopled stage-sets
where possums play
and trees
conspire
with one another.
Cats conduct clandestine meetings,
stalk imaginary prey…

The act of attention, heightened, until perceiver becomes the perceived
a different set of co-ordinates
a shifting of the centre of awareness
journeying and returning
chasing the involutions of a thought
or the flight path of a swallow.

The interplay of two rays

Time curls up like a woodlouse
Not long left.

THE whole of TIME in a fragment of TIME.

that's an old one from when i was a little kid, like, 20 or something
V

luka said:
that's an old one from when i was a little kid, like, 20 or something
Click to expand...

Is 'Vegetable Empire' an old term then or are you joking?

I came up with it ages ago yeah. then plagarised or quoted myself to use it as a title for another book.
V

You owe yourself royalties.

i would if i'd sold any

Heat streams visibly from the radiator, lifting the pages of the calendar
and the afternoon sun in bands through the window revealing the wall to be so much more. Recapitulated here, texture of the roller across that compromised surface, it's cratered skin and angles, and there, the brush, cutting in around the radiator. Magnolia
it's woven canopy, dragged bristles.

Time is abundant, if we refuse distraction, if we refuse to be entertained
pale yellow at the edges of the sky and the birds elegiac in flight across it,
in no rush either. Dream of contrails dissipating and television aerials,
the dying orchid , the tonal discrimination
of the birds. We have come this far, cold and shaken up, aching
to be healed as the parakeets dangle from wet branches.

Earlier that day, France in the eighteenth century,a frivolous adventure
how the faces change over the years, become ever more unmistakably
caught in our own world, not abstracted into some other lustrous horizon
far away. Lives in paint, a small dog at the ankles.

Impossible to speak of the absence, searching every face for a sign. We would like to come in out of the cold. And the light fades sun dips below the houses and the wall flattens into shadow again.

We live our lives in windows, like advent calendars. You can see us from the street, or from another window opposite
washing dishes, watching television,
or in squalor, scratching the eyeballs.
Tesco Express processes shoppers down the line chlorinated lettuce with croutons.
We wanted to exit entirely, and the sky rush through the skull like that, without impediment. Just this dismal life, on bruised feet, wanting to be rescued. My glorious swan-song, curled up in the corner and puking as the lights come on. It fell apart. A failure. Chicken dippers. A pot of gooseberry jam. Rheumatism. Growing old in a damp climate. And beyond the Tesco, the valley, cluttered with houses, under its pall of smog. You can say I love you as often as you like, all they do is laugh.

Shelf-stable, drooping behind the cellophane window. Fed your own lies. Want to be special, a special boy. Lonely, in a corner of the sky. It's just a losing lottery ticket, this life. There's more dog shit than there was a few years ago, I guess people stopped caring. It looks so sad, the way you tried to make it look pretty, and the wind hurling dust in our eyes. Battle tanks churn up the soil, gun turrets swivelling. We've already stayed too long. Knees aching at the onset of rain. The mud unavoidable. The window full of insults. Gun fire rattling from the valley, insurgents, or more likely
just gun fire turning the sky ragged.
Friendly potato chips, salt under the fingernails. Switch the phone off, disappear.
Last edited: Feb 21, 2022

Dreary prose poem from a few weeks ago 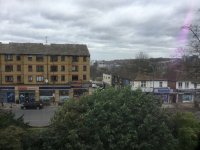 @wektor does this picture look familiar?

The quality I most associate with south London is lifelessness. The energies are torpid here. The swamp.

what the fuck, your friend seems to live a floor above my mate's landlord who's next door to hers

No, the landlord is next door, this is probably the same building

wektor said:
what the fuck, your friend seems to live a floor above my mate's landlord who's next door to hers
Click to expand...

This and the South Bank connection... What's going on here

You're cover's blown @wektor now what is it you want

luka said:
No, the landlord is next door, this is probably the same building
Click to expand...

is your mate that minimal tech producer fella or the chubby woman?

I need to know.

Definitely not a minimal tech producer or chubby lol. What year were you here?