Anglesey just has a very strong Welsh accent that I can barely understand. In fact when we were little kids I couldn't speak with my cousins cos they only spoke Welsh.

Most of the developing world. India, South America, Africa, loads of Asia. Sewage treatment is pretty expensive and complicated though. I worked at some waste water processing plants in the Oxfordshire area for a while.

This has to be the worst bog design ever though 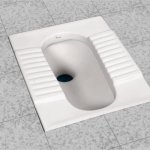 Maybe it makes sense when you're wearing a dishdasha but when you've got a pair a trows on and your tryin to crank a loaf it's like ehh?!

Germans naturally over-engineer their toilets by providing that bizarre little poo-shelf, presumably so you can examine your bumproduct before flushing it.
Click to expand...

At least Britain pretty consistently has proper toilets. Just about the only aspect of this sorry country that doesn't fill me with shame and loathing these days.
Click to expand...

IdleRich said:
In fact when we were little kids I couldn't speak with my cousins cos they only spoke Welsh.
Click to expand...

Either than or they just pretended to be monoglot when you came over.

Does it fuck northerners are bitter horrible cunts. London is a genuinely friendly place. Baboon is insane paranoid mad.

Hell no! Northerners will stop and talk to strangers. Help them out with directions at no cost. They don't make you feel uncomfortable for taking up their precious time. Way easier to talk to in pubs. Way easier to make friends with. Funnier. Better story tellers. Better accents. Bigger dicks.

Liverpool is the funniest city in England.

Gotta say that my experience is of northerners going on about how friendly they all are, whereas southerners are actually friendly.

It works though, some people actually think Yorkshire is friendlier than London.

At my friend's wedding one of his mates was from up North and I got sat next to the cunt. He arrived and started banging on about how shit London was and how unfriendly everyone was, bent my ear about that all through the meal and at the end I said are you coming out for beers but he just said "No, I've got to get out of this unfriendly shit hole as soon as possible" - yeah fuck off soon please.
Last edited: Sep 28, 2019

When my girlfriend (who is from Russia) moved to York she was amazed at all the racism and unfriendliness she received, she went to London for a weekend and was all "wow, there's so much to do and everyone just takes you for who you are" - so a few weeks later she quit her job and moved South. At her goodbye drinks a load of inbred half-wits queued up to tell her that they would rather die than go somewhere as unfriendly and shit as London, moaned all through it until she finally got away, moved south and had a fucking whale of a time leaving those six fingered morons probably still sitting in the same pub banging on about how York Minster (which they can't even say properly) is half an inch higher than St Paul's or whatever.

:crylarf: love all these stories

Lol. Yorkshire can fuck off. Liverpool with its direct connection to Ireland and all the humor, stories and everything else make it a contender. Then there's all the Italian, Greek and Spanish communities. It's a rich place. Not like a lot of the rest of the North. Its grim in its own way for sure but there's a spirit in the scousers that make it way more lively than bloody Yorkshire for example. Some call it the Napoli of the UK. Loads of spontaneity and playful piss taking.

They called him "lad", southerners don't do that as far as I'm aware.

I've never been to Liverpool. Turns out my girlfriend has though and she has some fairly robust opinions - she was quite taken aback by the rows of boarded up houses on the way into the city and the junkie in the pub who kept trying to sell her out of date ham. In conclusion she said "Until I went there I thought Hull was a shit hole".
In the interests of fairness I said "But weren't people friendly?" and she said "No. And Tate Liverpool is shit".
B

I know loads of South Americans who flocked to Liverpool because it felt more like home to them than the rest of the UK. I guess I'm more aligned with their way of thinking than someone from one of the coldest countries in both temperature and spirit in the world. She's right about the tate tho.
B

The Midlands is way friendlier than London. You might not like it for other reasons, but this is indisputably true.