luka said:
ive written so many harry styles poems recently. all these american girls touring the country going to every show.
Click to expand...

Harry Styles’
Appeal transcends
The point
At which propriety ends

My body bends
Distending while
He shifts above
With lacquered smile

... thank you biscuit. not sure what the appropriate emoji is here
C

shakahislop said:
@mixed_biscuits where are you? do you want to go to strummerville to see Radley Basingstoke?
Click to expand...

i enjoy glasto. on tv. but ive never been and never will. its always fun to see entire bbc specials dedicated to stormzy headlining and hear him getting emotional about that crappy banksy design he was given. most interested to see what herbie hancock and kendrick will do this year. 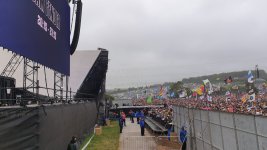 Mind you, I thought it was the lovable Sam Ryder, but it turned out to be Sam fender.

Randall at 2am. Will livestream.
W

Felt proud of them, it was so fucking early

Aye, TLC were on after Sleaford mods on West Holt's. Rain has stopped now. Must find echoey trap.

Smells amazing where you at shaka and hmg?
C

sufi said:
Just got in.dusty. heading for the biggest pyrotehnics
Click to expand...

Did you bust in?
C

catalog said:
I think I spotted hmg in the crowd with skin from skunk anansie
Click to expand...

Was she still in it?

catalog said:
Did you bust in?
Click to expand...

so how's the traffic getting to and from the festival? is there mass transit (maybe it's on strike anyway). I remember going to an early Lollapalooza and it was a major pain in the ass. the chili peppers were headlining and we didn't even stick around, left at the end of Ministry's set.

that was also the year nick cave and Jesus and Mary chain had their sets in the middle of the afternoon, kinda weird seeing that type of stuff in the 2:00 pm bright sunshine. the best act was Ice Cube, fire with that massive soundsystem pumping out his backing beats. and few paid attention to Rage Against the Machine on one of the side stages.

Traffic was non existent, the crowd springs from the earth, reincarnated year after year from lost clipper lighters and bumswarfed wet wipes.

Spotted the tIKtOk trainspotter lad earlier, he was clad in linen

sufi said:
Smells amazing where you at shaka and hmg?
Click to expand...