The film was 95 i think but the book was surely a few years before that.
C

A while ago on this forum I pointed out that we were further away from Jungle than Jungle was from Punk and everybody ignored me, but it’s all hitting home now, right?

IdleRich said:
So far I feel that despite forty rapidly disappearing in the rear view mirror, I have been lucky enough to remain relatively youthful looking and to avoid most of the obvious issues that start to afflict us older gentlemen - I mean baldness and so on - but it's becoming obvious to me that a lot of that seemingly untouched outward appearance is really just increasingly thinly stretched paper covering over a growing number of growing cracks.
The other day we realised that we hadn't been to a dentist for ages and, as there is one on our street, we nipped in and made an appointment... wish I hadn't cos now I have four fillings and two more needed. I have lived my whole life without needing one single filling and then suddenly - bam! I need six of them? What, why? Liza puts it down to the sugary horror that is Sagres but I dunno, I fear it's just them all giving up the ghost at once with age.
But worse was to come. As part of the incredibly complex and labourious process of getting a Portuguese driving licence I had to go and have an eye test yesterday. Now I knew that my eyes had deteriorated quite a lot cos sometimes I find myself unable to read things that I'm sure I would managed in the past, and sometimes I have to ask someone else to read things for me which is a bit embarrassing if I am actually nearer than them. And I particularly struggle if there is writing that is lit up, or on a lighted background or whatever, in that situation things go all blurry and I just can't read them. In fact I think I remember a kind of in-between stage when I couldn't read that sort of thing properly but I could make out the general shape and thus ultimately work out the word, but now I can't even do that. So, yeah, I knew it was gonna be bad but.... well, it was a lot worse.
He kept asking me to read things and then saying how bad I was, kinda tutting and making me feel guilty. It was strange as though he seemed to blame me for my failings. Suppose I had been told to prepare for a test and i hadn't done it, yeah then it might be fair to blame me for my lack of knowledge, of even if i had been told to lower my cholesterol or lose weight or something, but failed, well again yes I could accept that there was some kind of causal relationship between my actions and my being unable to live up to his expectations. But as I see it, I don't think I have done something wrong to fuck up my eyes, I've just got old, yet from his tone as he kept saying "Not good.... very bad" and so on I found myself apologising repeatedly at first - and then I was kinda like "hang on". Also he kept saying "You gonna have problems with the licence with these mole like holes in your face" and then at the end he was like "Nah, it's fine, as long as you have one eye and that has sixty percent vision you're cool" prick. But that said, the news isn't good, apparently my right eye only sees at sixty percent and my left at seventy, which means I need glasses, but, what seemed to really concern him is he kept putting different lenses in front of my eyes and none of them helped as much as they ought to have done so he said that there is some kind of deeper problem and as a result I need to book an appointment with a proper eye doctor.
So yeah, old age, teeth are rotting and eyes are failing. But there could be more to come shortly cos - as I mentioned above - there are so many medical tests you have to take to change over the licence and if a simple eye test has shone such a depressing spotlight on the inexorable march of physical decay, then what am I going to find out from the blood test, urine test, chest x-ray and the electrocardiogram? Oh yeah, and the psychological evaluation...
Click to expand...

craner said:
A while ago on this forum I pointed out that we were further away from Jungle than Jungle was from Punk and everybody ignored me, but it’s all hitting home now, right?
Click to expand...

But what a time to be alive when you get to experience both.

On the downside, boring acquaintances who were droning on about property prices and mortages 20 years ago are now talking about retirement plans, downsizing etc. Jesus.

john eden said:
But what a time to be alive when you get to experience both.
Click to expand...

I pointed out to Luke last night that we first met almost 20 years ago, and in another 20 years we'll be 60.

The hand of death slowly reaches out of the grave to tap you on the shoulder.

Jim is turning 50 in 2 years time. he still looks healthy and handsome but a lot of mens faces collapse at 50. its the moment
men lose their looks entirely. all vestiges of youth gone. decayed and slack.

Ageing is a cruel joke

Corpsey said:
I definitely need to start doing all the midlife crisis health stuff cos currently my body isn't fit for purpose.

Corpsey said:
Always got a cold. Always tired. Farting. Shitting something too hard, or too liquid, or too meagre. Can't be bothered to go out. Lie on the bed, watching documentaries on iPlayer. Add another book to the unread pile. Sentimental memories of idealised youth.

Both these are still totally true because I've failed to change my lifestyle. Also I'm older now by 2 years.

I would like to reassure all you young scamps that my face has not "collapsed"?

15 years til I get my state pension lads!
C

If there is still a state and it still has pensions in 15 years time.
C

luka said:
Jim is turning 50 in 2 years time. he still looks healthy and handsome but a lot of mens faces collapse at 50. its the moment
men lose their looks entirely. all vestiges of youth gone. decayed and slack.
Click to expand...

It means a smashing state pension

craner said:
If there is still a state and it still has pensions in 15 years time.
Click to expand...

Unfortunately my attempts at fomenting anarchy have only yielded partial success so far. Which means on balance I am expecting there still to be a state and state pension in 2036.

As biscuits suggests, the aim is to smash the state and its pension and replace it with something even better. Another world is possible where people don't have to flog themselves half to death for 49 years of their life and be rewarded with loneliness, a weekly pittance and the choice of eating or heating. 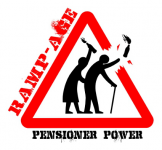 I actually asked my "independent pnsion adviser" this question, more or less, when my former employers stitched up our pension plan - they of course answered very conservatively that assuming that society transformed into an anarchist utopia then fine, i wouldnt need a pension, but probably wise to invest just in case that doesnt transpire

I've since realise that the whole concept of "retirement" is a scam pulled on us to justify the generation ahead of us bunking off early with all the takings, and will not apply to us lot at all - we'll still be working til we drop off
Last edited: Oct 14, 2021