I said elsewhere here that its as if Walken speaks English as a second language, without having had a first.

Also A Dangerous Method and Cosmopolis. But again, not the really hardcore ones like The Brood, Rabid, etc. I've remembered I've seen Videodrome, which was the best one of all. I really liked A Dangerous Method though
dissensus.com

I said elsewhere here that its as if Walken speaks English as a second language, without having had a first.
Click to expand...

Walken I'm assuming came from the era where Marlon Brando was god - he reminds me of DeNeiro in that he does a lot of shit that most actors never would, and that paradoxically gives him a sort of naturalism on screen that nobody else in the movie has.

I didn't know he was the one who was initially going to do Total Recall,

I was going to do Total Recall. Like with a lot of Philip Dick stuff the concept of Total Recall was incredible. The beginning was great. It didn’t quite have an ending that was satisfying and that was always the thing; what’s the third act? How’s it going to end? But I felt a great connection with Philip Dick. He’s such an interesting guy. A brilliant guy. A lot of his writing is very shoddy and not good because he wrote so fast and so constantly and he would be taking speed and would write for 48 hours straight which of course is ultimately what killed him. So I was working on it. At the time it was for Dino De Laurentiis and Ron Shusett, the producer, who’d had a lot of success with Alien, which, I have to say, took a lot of stuff from Shivers. There’s a parasite that lives inside you? Burns its way out? Jumps on your face and goes down your throat? I did all that before Alien and Dan O’Bannon (who wrote Alien) certainly knew my work. But that’s another thing. So anyway, I wanted to cast William Hurt for the lead, and it ended up being Arnold Schwarzenegger so there’s the difference. Once again I thought it could be sci-fi and entertaining, but heavy duty, you know? This was heavy duty. And ultimately what happened was, after doing a year’s worth of work — writing ten to twelve drafts myself, I finally handed the last draft to Ron Shusett and I said, “here, I think we have it, this is it.” And he said, “well, you know what you’ve done?” And I said, ”what?” And he said, “you’ve done the Philip K. Dick version.” And I said, “well isn’t that what we wanted?“ And he said, “no, we wanted Raiders of the Lost Ark Go to Mars.” And I said, “well it’s too bad we didn’t talk about that earlier because we could have saved ourselves a lot of trouble!”

There's some more footage in this French trailer,

This is a remake of an early thing right

woops said:
This is a remake of an early thing right
Click to expand...

He says it's something different and he just reused the title because he liked it.

version said:
He says it's something different and he just reused the title because he liked it.
Click to expand...

I guess all the good titles have been taken.
S

IdleRich said:
I guess all the good titles have been taken.
Click to expand...

It's been a title looking for a project as he apparently used it for eXistenZ at one point too.

The film itself looks like a bit of a remix of some of his previous stuff. There are specific moments which seem like nods to the hole in the stomach in Videodrome, the game pods and Jude Law sticking his tongue in Jennifer Jason Leigh's bioport in eXistenZ and the surgical instruments in Dead Ringers.

I dunno how good it'll be - I didn't think much of his last one, Maps to the Stars - but it's cool to have a new thing of his on the way and it looks more interesting than most of the stuff being released at the moment.

I'll watch it for sure

He's already working on another one.

"Vincent Cassel will reunite with David Cronenberg for “The Shrouds,” a new thriller from the director of “A History of Violence” and “Dead Ringers.” The film, which Cronenberg will write as well as direct, centers on Karsh (Cassel), an innovative businessman and grieving widower, who builds a device to connect with the dead inside a burial shroud." 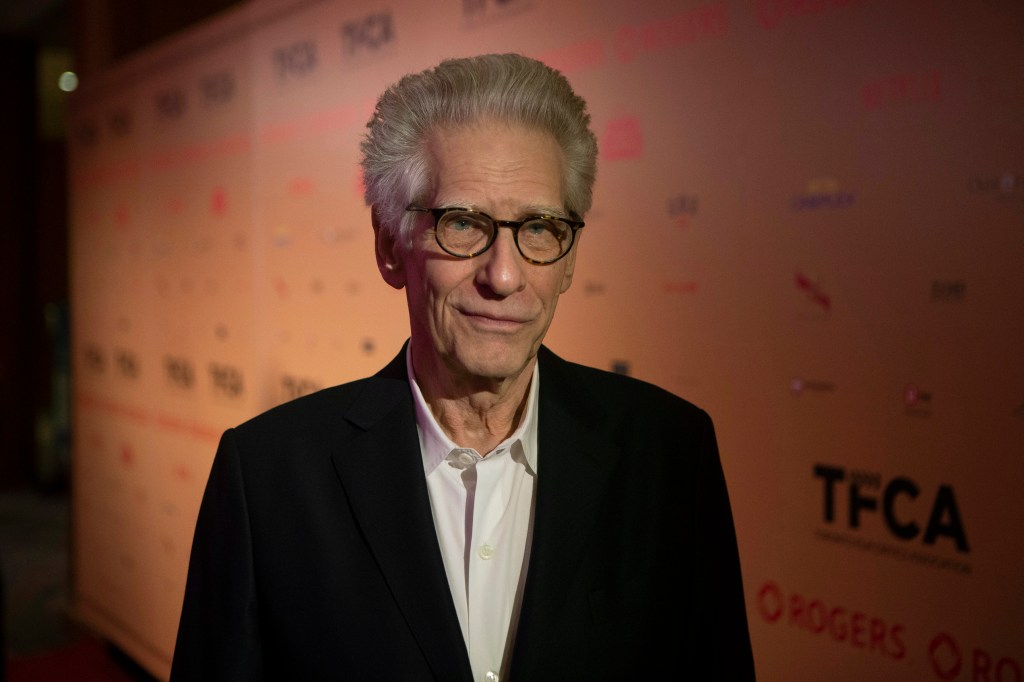 David Cronenberg Breaks Down Cannes Walkouts, His New Film’s Sexuality, and Why Netflix Turns Him Down

Eight years after “Maps to the Stars,” David Cronenberg is coming back to the Cannes Film Festival with what looks to be a big bang. Weaving together equal parts body horror and dystopi…