polystyle said:
The Astra Z vac seems to make issues doesn't it , Catalog was just saying the other day
Click to expand...

143 I.Q. Magical Thinker said:
I've already asked if I can have her stereo when she kicks it
Click to expand...

Did we live free of all "restrictions" prior to March 2020?

mixed_biscuits said:
The idea that there can ever be a moral argument for forcing someone to do something against their will is simply wrong in itself (just look at the graphs if you can't see this immediately). An obvious point and one I'd thought too trivia to require reinforcement, but apparently I'm wrong. Once you do recall this fundamental axiom however, then this whole disgraceful situation is brought sharply into focus and it becomes obvious that the entire idea of enforced mask wearing is driven by pathetic cowardice from our so-called leaders. What they pretend is a genuine act of kindness from the nanny state (a contradiction in terms of course) is mere self-preservation, they care not a jot for you or anyone like you, they simply believe that reducing rates of infection will reduce their chances of being infected themselves and they are more than happy to forcibly "protect" others merely to do that.
In other words, they hide themselves (ironically) behind a mask of morality - moreover a twisted view of morality that upsets the natural and right order of things (and sickens me to my very stomach). The function of the weak is to die, those who cannot stay alive unaided are not truly alive, and shackling Superman in the mistaken belief that this will somehow protect them is the greatest sin imaginable. And, even if they were correct, I refuse this slavery they call protection and I refute their contention that it would be an outcome worth pursuing. I will not remain bound in their cuckkkprison, I will not save lives just because it's easy to do and because somehow they have tricked themselves (and others) Into thinking that it is a good thing. I am Mixed Biscuits, I will not creep around obeying their rules, The Man cannot contain me any longer, from the 22nd of June I will pay no heed to the slavemasters. I christen it Intergalactic Freedom Day, and from then on those rules, and any other that hold us down (including gravity) must be disregarded utterly. Anyone still following them will have revealed themselves as truly brainwashed. The kind of idiot who would rather be alive than free, the kind of mindless drone who would actually lift a finger to save a stranger's life, a brainless snwowflake who has never even triumphantly drawn a red circle on a graph.... who´s with me!
Click to expand...

Wow, strong stuff MB, why did you delete the original post though?

IdleRich said:
Wow, strong stuff MB, why did you delete the original post though?
Click to expand...

Because he's very brave, unlike pathetic cuckwimps like you and me, clearly.

IdleRich said:
Wow, strong stuff MB, why did you delete the original post though?
Click to expand...

Because you wrote it?

To be fair it is possible he didn't precisely write those exact words. I feel there is a tinsy-winsy possibility that someone was really fucking high or something last night and he (or she) was somehow able to vibrate on the correct frequency to actually join with Biscuits and in fact provide the exact answer MB was gonna give to the question above.
Personally I wish that I.... or he (or indeed she, whoever it was) had gained insight into something more historically important but beggars can't be choosers i guess..

I think the Covid project is expected to run til 2025

Who are the project managers? (oh no, don’t ask it that)
W

Does it fall under CDM regs? Hell of an F10 that

Who are the project managers? (oh no, don’t ask it that)
Click to expand...

Can you not see that the messaging about India is the same as emanated from China?

Dodgy pics rehashed from other disasters, selective appropriation of statistics, cherry-picked vox pops...there's no way this is ending.
L

mixed_biscuits said:
Can you not see that the messaging about India is the same as emanated from China?

Dodgy pics rehashed from other disasters, selective appropriation of statistics, cherry-picked vox pops...there's no way this is ending.
Click to expand...

and for about 15th time, I ask the same question that you never answer: why on earth would any country want to do that? why portray sickness, death and misery where none actually exists? how does that benefit the country's economy, or local business, or approval ratings? what's the point? how does that makes things better?
L

and do you have actual proof that legit news sources have used "dodgy pics rehashed from other disasters"? I suppose it's always possible, but let's see them.

Your question has been answered over and over again by me and others.

Even without any conspiracy theorising, newspapers go by 'if it bleeds, it leads' and normally misrepresent what they report.

That said, you would think that more viewers would be attracted by a focus on positives from elsewhere eg. the US states that have completely reopened. But no, keep putting people through the ringer.
Last edited: Apr 28, 2021

mixed_biscuits said:
Can you not see that the messaging about India is the same as emanated from China?

Dodgy pics rehashed from other disasters, selective appropriation of statistics, cherry-picked vox pops...there's no way this is ending.
Click to expand...

Good god, man, you really are beyond either help or parody.

You don't fact-check what's thrown at you by the media?

Compare the tenor of the messaging with the reality: 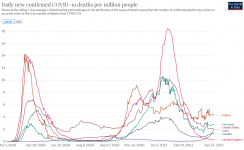