Haven't read much Whitman myself, I plan to, but anyway, this has just come out. 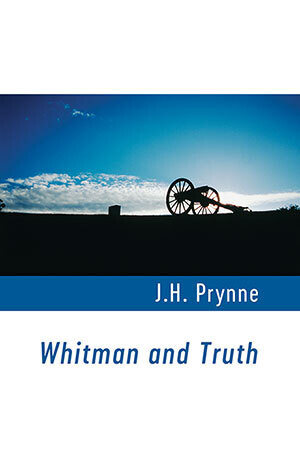 Benny B said:
Can anyone explain this? I don't even know what language it's in.

sufi said:
annoyingly i have found a blog explaining about that piece - i didnt read it yet
spoilers

Prynne's runic poem Lunchy claimed, in his review of not-you (published as a fugitive leaflet and as part of the internet angel exhaust...

I received a copy of The Letters of Douglas Oliver and J.H. Prynne 1967 - 2000 in the post earlier this week. I picked it up for the first time this morning, just to skim through, but my attention was grabbed by Pyrnnes' reference to his "runic triode" in a letter to Oliver, and the editor has kindly included an "Appendix B" entitled "Transliteration of Runic Inscription" where Prynne states:

It is a gnomic amulet or avertive charm in the form of a solstice song. Its signification should by no means be revealed to the general public or to any profane person [...]
Click to expand...

However he does give Oliver a "literal rending into pre-Nixon":

The central three lines may be roughly metaphrased thus:
'By day the cherry tree is the bright-shining honeycomb of the sun; by gift the bean is the child of joy of the bee; the dark grove of the yew-tree is the circlet of life, the mouth of the god.'
The dialect shews a number of idiosyncratic features.
Click to expand...

The full letter can be found in an obscure article by Justin Katko, ‘Regarding a Specimen of Palaeobotanic Epigraphy: J.H. Prynne’s Runic Fertility Prayer’, which I've failed to find a copy of. According to the footnotes of this book of letters:

Katko writes: 'Pyrnne's fertility prayer might plausibly be construed as a reparative to the grief induced by the death of Tom Oliver, Douglas's son who died in [November] 1969. [...]The prayer is in this sense not only an evocation of reproductive health, but an inducement to hope, to keep making love, to faithfully keep trying to make, out of endearing love for the living spirit of the dead'
Click to expand...

also from the footnotes:

An email from Oliver to the email list Poetryetc of 27 February 1999 describes the rune poem in the following terms: 'It's an important poem to me.[...] I have never personally departed from its obsessional field, because it is my own. I have the runes framed above my desk as I write, for I keep it as a charm [...]
Click to expand...

[n]ot only does Oliver appear to be the prayer's first attendant, but Oliver's own home was effectively [...] its first (and enduring) site of publication
Click to expand...

"The central three lines may be roughly metaphrased thus:"

This guy needs his head dunking in a bog

Video recording of a brief appearance by Prynne on the television show Celebrity Masterchef UK (2013), Series 8 Episode 14, which aired on BBC One on Thursday 29 August 2013 at 8 pm GMT. [According to the BBC website, ‘The semi-finals continue as the celebrities are given their most daunting challenge yet and are thrown into the world of mass catering on an impressive scale. Gonville and Caius is the fourth oldest college in Cambridge University, and 150 students, parents and fellows will be attending the prestigious end of term dinner. Working in pairs, the celebrities are responsible for providing a three course dinner of the finest standard to befit the surroundings and the occasion whilst working quickly to get their dishes out on time.’ Prynne may be glimpsed eating a woodpigeon salad made by Les Dennis and by Shane from Boyzone].

I might buy a book of this berk's poems

get the yellow one, not recent stuff

Why the angry face Craner

Corpsey said:
Why the angry face Craner
Click to expand...

He's angry because he doesn't understand Prynne and feels vaguely intimidated and left out.

luka said:
"He now drops the heavenly coin in the doorway"
Click to expand...

INTO THE FURROWS
of the heavenscoin in the doorcrack
you press the word
from which I rolled,
when I with trembling fists
the roof over us
dismantled, slate for slate,
syllable for syllable, for the copper-
glimmer of the begging-
cup's sake up
there.

Benny B said:
Just noticed this line is a direct lift from a late Paul Celan poem

INTO THE FURROWS
of the heavenscoin in the doorcrack
you press the word
from which I rolled,
when I with trembling fists
the roof over us
dismantled, slate for slate,
syllable for syllable, for the copper-
glimmer of the begging-
cup's sake up
there.
Click to expand...

Yeah, it's from Atemwende/Breathturn, the first of his later books that had that super condensed, vertically stacked etymological style. Amazing book.

It's very impressive that Prynne was onto this stuff in the mid 60s, several years before any English translations were available or any real critical appraisal of it had developed. You can see the influence all over White Stones, and there's that one in Brass, Es Lebe Der König, that he wrote as an elegy just after he learned of Celan's suicide. There's that essay about huts he wrote too.

Benny B said:
Just noticed this line is a direct lift from a late Paul Celan poem

INTO THE FURROWS
of the heavenscoin in the doorcrack
you press the word
from which I rolled,
when I with trembling fists
the roof over us
dismantled, slate for slate,
syllable for syllable, for the copper-
glimmer of the begging-
cup's sake up
there.
Click to expand...