To swell up so long, this time indwelling
in clouds going to flowers,
in order routine adjunct and smother
the meaner grace, below us.

All tangled in her hair's next affright
or mantled in burning, new
scan over tumults intently, Afric storm
scant in hood to undergo.

Ascorbic detail in this they ride partly
overlooked prior to attitude
stormy, defensive shrouding, in a hunt
for pitched cornice revealed.

Too single! caress fronds as to liberate
race hatred' package tour
whose every touch, kiss the rising hand
will too bleach-whiten yours.

This long one I'm typing out, it's very good don't you think?

A: I have a very intimate friendship with J.H. Prynne. I think the term ‘mentor’ really doesn’t do justice to the kind of generosity with which he nourishes the thinking and writing of those students who grow close to him at Cambridge. He would not give me any sort of direct instruction or feedback of the kind that might be accommodated in a creative writing classroom. He wouldn’t read my poems and point out faults with them or do any kind of informal workshopping with me. But he would give extraordinary, inexhaustibly generous encouragement to conceive poetry and the life of the poet as fateful, as a destiny, a necessity. He made it possible to feel and to believe that poetry really could be the most important thing I could do. It was startling to encounter that idiom and that power of conviction in the university environment.
For Prynne himself, and I think in his mind also for some other poets who might come along now and then, writing poetry is a kind of traumatic destiny that announces itself quite early on in life, almost a kind of inescapable bondage. He would, all the time, ask me deeply searching questions about my writing practice: what did it feel like, why was I doing it, what did it do to me to feel as though truth had been made to appear in poetic language, why did I think I had to do it, and I would ask him similar questions. And we would sometimes, at first gingerly, because of my embarrassment, talk about his work, about which he had been famously reticent for a very long time. I think this was really how our friendship first began to blossom. One night at a party I was unabashedly direct in asking him some questions about his poetry. From then on, occasionally we would talk about some of my poems, but more often we would have very long, ardent, intimate conversations about the nature of writing itself, what it was we were doing, what kind of truth might be at stake, what was the relation of this practice to history, to politics, to what was going on in the world.

when you read those printing details it's like a comic-collectors market. no two copies alike. gold foil cover 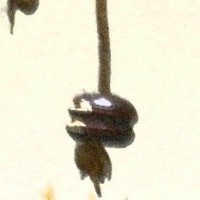 One of the very (very) few good things about the last year is that Jeremy Prynne has published at least two volumes of verse and both of these are in front of me. He may have written more but I&#82…

Leading-edge undulations or tubercles of humpback whale flippers have been known as one of biomimetic technologies adaptable to flow control of aerofoils, particularly at post stall conditions. These leading-edge undulations are also known to reduce noise resulting from an interaction with on-coming turbulence.

that's an aademic paper not Prynne but it helps understand how Prynne becomes Prynne, living all his life in a university surrounded by this kind of language. 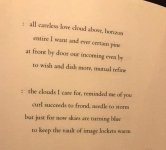 to me prynne is very romantic but that's an aspect hardly attributed to him is it?

what poem is it?

A new one I haven't read. Someone put the photo on his Facebook fan club page.

It's called Kernals in Vernal Silence. he's embracing silliness in his dotage.
C

Think I'd like to read this book now ad it goes, but seems hard to get

There's a recording of it though


I'm listening to it now

I’m reading his word by word analysis of Grecian Urn by Keats that @luka mentioned on Twitter - like a forensic exploration, very instructive about how he sees poetry working and maybe how to work with his poetry.
C

i feel like shakespeare could be a good way in for me to poetry.

You can come back now, you wanker.