see you lot i really do know my stuff

@mixed_biscuits said he's better at French than you

no he didn't and he also said tetanus cures covid.


version said:
My brother has a tattoo of the word 'GUILLOTINE' across the top of his crotch that extends down his penis, but he also has a tattoo on his calf of a small, cartoon penis with little feet and legs.
Click to expand...

woops said:
everything does. in fact as i've said before i'm actually one of the worst people to ask about french poetry because i'll start reading a poem thinking right, let's see what this is all about, and after a couple of lines i'm just like this

i can imagine it would translate particularly badly though and naturally i wouldn't be caught dead reading éluard in translation.
Click to expand...

Just looking at an Eluard poem in the PFM anthology, it appears to be just a list of descriptions of sexual positions given daft names like the holy table, the sewing machine and the toast to the lumberjack.

Benny B said:
Just looking at an Eluard poem in the PFM anthology, it appears to be just a list of descriptions of sexual positions given daft names like the holy table, the sewing machine and the toast to the lumberjack.
Click to expand...

right, well i don't think i'll bother trying to defend that then. if i was @luka i'd come up with something smart arsed like well that's what you get for reading anthologies. obviously that's coming out of a certain catholic historical context, in france, but whatever

I thought that sounded quite good tbf

luka said:
I thought that sounded quite good tbf
Click to expand...

see what i mean?

but a hundred years ahead of its time! la profanisaure is a totally plausible surrealist anthology title

...and wouldn't we all agree that viz is the post-modern inheritor's of the surrealist tradition, etc

does anyone know where to find the poem "of movement towards a natural place". it's in "wound response" (1974) but i can't find it anywhere.

yyaldrin said:
does anyone know where to find the poem "of movement towards a natural place". it's in "wound response" (1974) but i can't find it anywhere.
Click to expand... 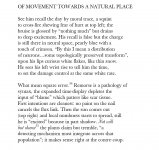 I haven't actually read this poem btw, I found it here

hmm, i guess this bit is also part of it then?

okay it's this i think, thanks!

OF MOVEMENT TOWARDS A NATURAL PLACE

See him recall the day by moral trace, a squint
to cross-fire shewing fear of hurt at top left; the
bruise is glossed by “nothing much” but drains
to deep excitement. His recall is false but the charge
is still there in neural space, pearly blue with a
touch of crimson. “By this I mean a distribution
of neurons…some topologically preserved transform”,
upon his lips curious white flakes, like thin snow.
He sees his left wrist rise to tell him the time,
to set the damage control at the same white rate.

What mean square error. Remorse is a pathology of
syntax, the expanded time-display depletes the
input of “blame” which patters like scar tissue.
First intentions are cleanest: no paint on the nail
cancels the flux link. Then the sun comes out
(top right) and local numbness starts to spread, still
he is “excited” because in part shadow. Not will
but chance the plants claim but tremble, “a
detecting mechanism must integrate across that
population”; it makes sense right at the contre-coup.

So the trace was moral on both sides, as formerly
the moment of godly suffusion: anima tota in singulis
membris sui corporis. The warmth of cognition not
yet neuroleptic but starry and granular. The more
you recall what you call the need for it, she tells
him by a shout down the staircase. You call it
your lost benevolence (little room for charity),
and he rises like a plaque to the sun. Up there the
blood levels of the counter-self come into beat
by immune reflection, by night lines above the cut:

Only at the rim does the day tremble and shine.
Click to expand...