When are you an interesting writer?

Staff member
there was a long period of my life, the whole period I was in Australia, when I lost my connection to the great magical powers I had taken for granted, thrown back on my own thin, meagre resources, with no wider spaces to break into absolutely fucked.

Staff member
even since i restablished my link to the outside and beyond of course more days are spent uninspired than not. these mysteries, butting into these mysteries are what set me off into poetry in the first place. becasue they seemed to offer the key to something important

Staff member
it was actually reading which opened this up inititally. i found, as a teen, that there were moments when a poem would come alive on the page but when i returned to it at another time it would be inert.

Staff member
and what i wanted to try and find was some of the whys of this process, and ways to strengthen and extend the connection. so this is why poetry for me is more than just the writing. it's a kind of alchemy, or a kind of way to cultivate and manage a mental illness.

Staff member
"At last, I began to consider my mind's disorder a sacred thing."

Staff member
i've got enough banked up material, as ideas and so on, stored perceptions, and enough of an ear, that i can write reasonably well even when i'm out of form, but there are no surprises, everything becomes a bit rote, the line never veers off in an unexpected direction, no strange word introduces itself, bursts out of the tree squawking

Staff member
and there are other considerations- there is The Writer, as a self among many selves, it's not usually the self we inhabit, we feel it clicking into place sometimes, there he is!

I've got a lot of voices and lot of modes of operating, according to social situation, present company, etc as we all do, and most of them are fairly quotidian, and most of them can't write poetry, although they can do other things, like navigate Very Normative Homosocial banter-space, for instance....

Staff member
moving through the levels, shifting through the modes, all this is part of the process. realising when you are operating in too glib a manner and finding a way to get a little further down. and part of being an uninteresting writer, is when we can't find a way to do this. we can't find the deeper engagement. conversations are also like this.

link above to partial explanation

Staff member
Great posts Luke. Oh thanks mate yeah I was pretty keen on them. Very interesting and intriguing.

I was actually about to write pretty much that, fucking beautiful splurge there Luke. I love you. How do we get him into this mood more often? But then what stopped me was the thought of spoiling the magic by drawing attention to it. Like when you said great thread or im enjoying this conversation and it subtly affects momentum. And I already give you too many compliments

Staff member
Don't worry. It's usually in the morning when I've just woke up. Evening I don't care about impressing anyone I'm just waiting to fall asleep

Very normative homosocial banterspace. What is it good for? As enlightened ones, We’re required, prescribed a cynical attitude towards it, and we all know how repulsive the excesses are, but let’s not pretend it’s not our common source, where we begin

Staff member
I wasn't knocking it. I live in it.

exactly. Me too. I think its important to honour it

Staff member
In other words, take the bros with you.

shiels said:
Very normative homosocial banterspace. What is it good for? As enlightened ones, We’re required, prescribed a cynical attitude towards it, and we all know how repulsive the excesses are, but let’s not pretend it’s not our common source, where we begin
Click to expand...

Maybe its because, if you surround yourself with people saying nearly enough the same thing you are, it can effectively "patch up" your blindspots, and in a fairly compatible way. That is, your friends may notice more or less obvious things that you somehow didn't notice, and learning it indirectly, through them, lets you advance faster than if if were left to your own devices.

Whereas, if those in the banterspace (great word) were making different enough assertions, you would be patching up your quilt with a mish-mosh variety of fabrics, rather than fabrics that, from some distance, blend into one another. You would be stitching incongruous answers into the framework, which isn't as useful if these groups self-assemble in the interest of pooling their angles, with the greatest consistency possible, into a stronger group-angle

What is it good for? I guess just reinforcing value systems, world views. The players in the banterspace exchange similar fabrics to bolster each others patchwork takes on the world, and collectively these patchworks can, themselves, blend/spindle together into some kind of macro-fabric, and that is where the voice of the clique emerges, some kind of proto-dialect perhaps. 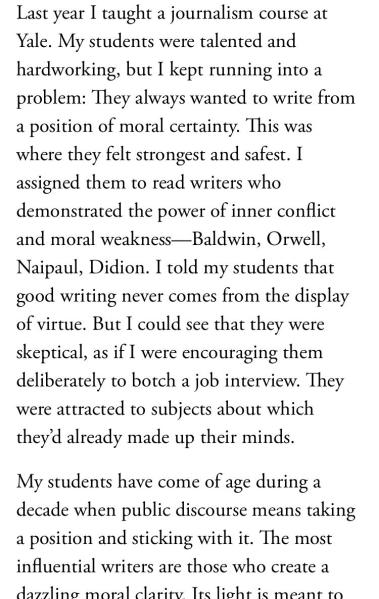