what I mean is just what I said really, that liberalism - philosophical liberalism - mandates a kind of neutrality wrt certain important issues, which are left to the individual to decide, and with the understanding that these individuals might each answer them differently and that this is ok.
C

Vimorhy can join us on our walking escapade

I think it would be good to see you and Mr your hands together in the great outdoors of somewhere like Strines in the peak district. We can eat our own shit or something, go to snakes pass pub for a pint of foaming nut brown ale

vimothy said:
I refuse to walk anywhere i prefer to be carried on my shield like a barbarian chieftain
Click to expand... 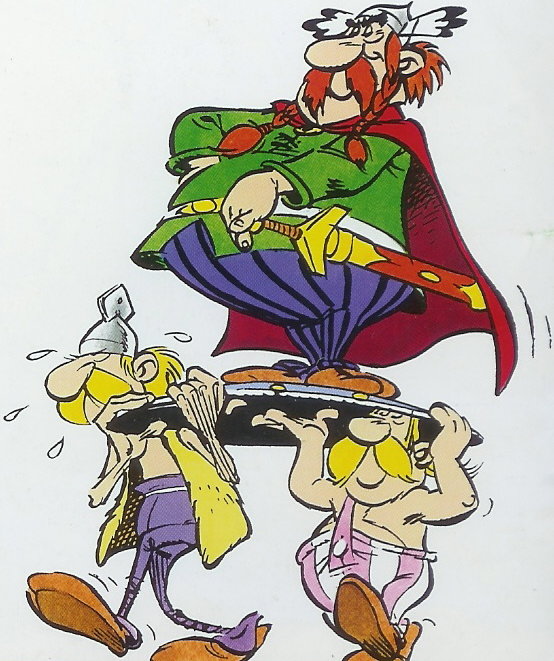 We should all tag ourselves as asterix characters. I'm obviously asterix

catalog said:
We should all tag ourselves as asterix characters. I'm obviously asterix
Click to expand...

@craner had a Cacofonix avatar for ages!

Luke obvs vitalstatistix. Rich and leo would be unhygienix and fullyautomatix?

Staff member
Padraig, with his immense strength, is Obelix (although with somewhat better definition than Obelix, I expect).

Mr. Tea said:
Padraig, with his immense strength, is Obelix (although with somewhat better definition than Obelix, I expect).
Click to expand...

He's more like a butchers dog. You could put him on a treadmill and he could run for weeks, but he's not built like a power lifter. He has a discernible neck etc

I think version would have to be obelix actually
C

Thirdform would be one of the pirates i guess

I see myself as one of the romans

vimothy said:
I see myself as one of the romans
Click to expand...

Of course. The civilizing influence.

catalog said:
Corpsey would obvs be dogmatix
Click to expand...

"Dogmatix loves nature and hates to see trees suffer. (Obelix once mentions that this is because Dogmatix likes to urinate on them.)"

Geriatrix is the oldest inhabitant of Asterix's village: he is mentioned as 93 years old in Asterix at the Olympic Games (while drunk, he says he feels ten years younger, to which Asterix replies, "Well, that makes you 83, and it's time you were in bed"). Some translations make him no more than 80.

As an elder, Geriatrix demands respect (generally more than he is given). Nonetheless he dislikes being treated as old and will attack anyone who comments to that effect. In particular he often beats up the village blacksmith Fulliautomatix for refusing to fight back due to his age, and actually cries out to be attacked (in Asterix and the Roman Agent). Geriatrix is seen to sit on the village council at times, on the face of it an entitlement deriving from being the oldest in the community. An example is on p. 11 of Asterix and the Cauldron where he sits with Vitalstatistix, Cacofonix and Getafix, in deciding on Asterix's punishment for having violated their honor code. In Asterix and the Roman Agent he acquires a club which he later uses to knock down The Mansions of the Gods.

Geriatrix is against foreigners who are not from his village. He is a veteran of the Battle of Gergovia and the Battle of Alesia, and refers to them when excited ("It'll be just like Gergovia all over!") or distraught ("It's just like Alesia all over again!"). He has an eye for the young ladies and has a very young and beautiful wife (who appears to be in her twenties) of whom he is very possessive — particularly when Obelix is around.
You must log in or register to reply here.
Share:
Facebook Twitter Reddit Pinterest Tumblr WhatsApp Email Link
Top