Bat Chain Puller title tune is ok. Got a beat and a half, but the quality was sliding. The last composition with any swing


Quality purchase for the fellow gimps. View credits, reviews, tracks and shop for the 1999 CD release of The Mirror Man Sessions on Discogs.

Cheers Don. Eh? You want me to do what to @luka and @craner? You fucking demon.

Apologies if these are repeats from a few pages back. You cunts went mad while i was waste deep in ironing.

There's a bit in Nick Kent's book, Apathy for the Devil, where he says someone who knew Beefheart said he was a pretty normal guy until he got stuck in a car at a drive-in theatre watching The Incredible Shrinking Man on acid.

It might have been one of those acid things where he could have gotten out anytime, but became convinced he was trapped.

The handles are melting, the door is a porthole to Hades.....

As much as the shirt demands attention, this rendition is phosphene for listening rather than watching

version said:
It might have been one of those acid things where he could have gotten out anytime, but became convinced he was trapped.
Click to expand...

The doors are where the windows should be.

The tune that was playing the night i lost my cherry. Ongoing clumsy fumbles with a girl from our year Kathleen M, but that night things changed permanently


She did that thing when you intuit by their doe-eyed mood it’s on and yet you’ve never used a condom before. She offered to put it on, except she kept fucking it up, wrong way then another. All that 80’s pop shit you couldn’t escape blaring in her room while her folks were out. Enough of the iron grip, love. Proceeded to throw the durex in the bin and get on with it.

I remember her eyes. A mixture of confusion and pleasure and like any virginal sex, you’re constantly evaluating your performance and terror about pregnancy, rather than letting go and enjoying it. We were a pair for a year, an eternity at that age. She talked me into going to a few festivals and different gigs. You’d kill a mf to maintain that flow of soft flesh, but it was never just sex. She contacted me on Friends Reunited out of the blue when that thing reared its brief porthole into hell, the first taste of the anonymity prolapse that Facebook followed through on. Small talk, never used one of those platforms since.

That song is almost tattooed on my mind. The signature tropes of the pop period, even has a bit of vocal adjustment on one of the hey hey’s. You can hear the sonic shift in the air from pop wank earlier in the decade. I’m sure she was thinking of James Spader throughout the ride itself.

Staff member
@shiels do my people have rousing anthems of their own to sit alongside the ones washerman has posted or is it the case that oppression is a prerequisite for good music?

Staff member
This list has made me think about these questionS. I feel probably my people have no music just some bully boy chants to wind up the Catholics

@shiels Ever pondered these uniform prep routines, do the wives, mums and sisters get coerced to do all the ironing, or is it voluntary? (jokes)


Orange/unionist/paramilitary dirge ‘music’ labours along, barely actual music at all and I don’t interpret that perspective through faith or political biases

Peggy Gordon has been a cross-divide tune.

Football was an inter-generational thing, unique for song legacies. You had old-timers and late-diaspora exiles who’d left for Britain in the 50’s and 60’s who taught you and mates. Different context to relatives and it didn’t take much when you’re stuck together on a crumbling coach for the best part of a day to get the football crew roused up and singing. If anything unites these islands and their cultures, it’s alcohol. Singing among men is a tricky one. Welsh male voice choirs come to mind (see Gwahoddiad in the initial pages here, top 5 personally).

No Surrender to the IRA is still a standard Rangers prolapse. The old Combat18 network were strongest at Chelsea, Pompey, Stoke and Leeds. You could hear No Surrender from these twats even watching Forest play. They all liaised with Rangers worst elements. Never heard West Ham use it and Millwall only really had No-one Likes Us We Don’t Care. Ireland v England in Dublin, 1995, was stacked with Gers and Ulster’s worst elements. Repugnant. Engerland’s national contingent still routinely blast it virtually every game across the globe at some point

Regional Irish rugby and the national team integrating all 4 regional teams, has been ahead of the curve in this respect (@luka you’re a rugby head, look out for Brian O’Driscoll’s rugby doc ‘Shoulder to Shoulder’, he plays a fucking lambeg!). Thankfully, the vast majority of the lunacy has been allocated to the fringes, but the fuller post GFA experience in Belfast on the 12th of July is still a riot of surreal codes and sartorial crimes.
Last edited: Sep 30, 2020

Tunes from tv weave their way through time's ether. If one sticks out, it has to be this exotica gem


The Box of Delights intro was close and one of the better shows for the 80's (Robert Stephens as the seething, sociopathic clergy figure is towering), but that's mostly nostalgia speaking. Both were disturbing, only TOTU had a nuanced, adult charm for an older audience and not just naked, silhouetted maidens.

You knew the program was going to involve fear and pain, which the theme tune cranked up through gorgeous, sensual juxtapositions every episode. If it was on, a unique must watch. Twilight Zone is the nearest comparison, but that lacked itv's lower budget and range and the moods are v different. Beat 3-2-1, Bullseye and the snooker, that's for fucking certain.

Severed Heads. Even the name has an ominous John the Baptist-y tone, but what an act (despite I.S. going to town in recent years). Add filters like MTV‘s insidiousness creeping more and more through the cultural concrete at this time, but despite all that Tom Ellard has to be among any top tier list of synth savants. Severed Heads had funk, groove, dissonance and a visual range of imagery which, looking back as I type this inane drivel out, was a one of the personal pit-stops along the paths that converged towards acid house.

Severed Heads had the brightness and crisp sound engineering of various Sheffield bands, but the emphasis was usually on groove and this is the main, underlying factor for including these tracks. A really good ‘mushy’ sound, ie tripping music. Expansive, weird, otherworldly. Exposure came via good ol’ records, tape shares (with hand written track notes), a word of mouth act that filtered down through the age groups at school in the build up to that 16yr split up on the horizon. A testament to Oz. There are stacks to choose from (titles included in case of blockages) so, in no particular order, stfu and drop the music


Around this time a friend got a technics deck with pitch control. A revolution. Not mixing yet (but not too long), but the world was opening up far more musically. You could get a flow going with mates even with one deck, if your focus and tastes aligned. Cue this monster


What I’m trying to express is a developing love of rhythm. That it could feed into itself even unmixed. Fela Kuti was a bridge, but before going down that route and onto House, need to take stock. On the flip to this worldview and aesthetic would be an act like Zoviet France, another northern behemoth, which is going to take a few days to get to grips with too. It’s the diversity of this period that was monumental.

1988 was a horrendous year overall. Deaths from terrorist violence came into a starker focus, then the tv flooded with the Funeral Murders in Belfast and that cunt Michael Stone’s attack at Milltown cemetery, both within a very short timeframe. The only real out was music, draw, mushrooms, the odd ride and what to do in the autumn career-wise, the consequences of which I still live with today.
Last edited: Oct 12, 2020

I keep putting off engaging with this thread because it seems to be the sort of thing I should really sit down and read/listen through, unbroken, while doing nothing else.

What I've read of it is great, though. Could you at some point please replace the YouTube links that have been taken down on page 1? For the laggards and sluggards amonngus.

Just read the story about wiping your arse with a t shirt before Slayer. This thread is even better than I'd feared.

@Corpsey Bollocks. Sure man, The Flying Burrito Brothers thing is Live at the Avalon Ballroom. The release is two live sets from the same venue, so there’s some degree of repetition/overlap. Edit even has a wiki 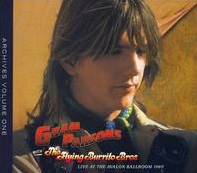 Fotheringay was a segment from The Beat Club, a tune called the Gypsy Davy off their lone lp. I get the twee line, but it was my sister’s holiday standard. The original clip had a much more vibrant rendition than the lp‘s take, but this one is getting there. You really need to juice the trebles up from time’s muffling though


YT has/had a stack of Beat Club gigs. Some incredible performances but seems a bunch are getting pulled.
Last edited: Oct 12, 2020
W

re the american tough guys thing, pound and hemingway used to spar

lovely handwriting on the cover of strictly personal.

Corpsey said:
I keep putting off engaging with this thread because it seems to be the sort of thing I should really sit down and read/listen through, unbroken, while doing nothing else.
Click to expand...

It is. It's brilliant.

Previously forgotten inclusions (there’ll be more). The provenance of Wally Badarou‘s ‘Chief Inspector’ was a random tangent find on the Echoes lp. An immediate what the hell is this mindbomb, love its bouncy hook. A mate said and still says it’s rubbish. Not a perfect world. Proven Sunday session groover later on, no small test to pass


Outstanding music below from Booker T and the MG’s. Would go so far as attributing magical powers to this masterpiece, a term to always be used sparingly or you end up gushing contrived ‘this is the bestest best yet everest’ etc. But it is.

Perfection of melody and rhythm combined into a subtle rush attack. Where and when it first appeared to these ears is lost to time. Anecdotally, Weatherall playing it during a Berkshire knees up many, many moons and the ensuing carnage of a few hundred faces and souls physically and psychically melting (health warning mixing E’s and microdots), is a dance-floor top 5 in and of itself