I said "I think I'm transferring to the other side I can feel it in me bones" she said "Spendy we're in a laundromat, that's the washer rumbling" 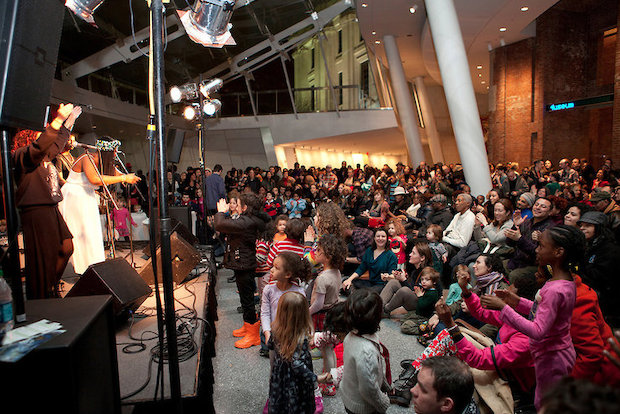 Backporch in Bolivia performing a free show at Brooklyn Museum’s Target First Saturday. At 7:12 p.m. on a Saturday we convened at AJ’s apartment in Boerum Hill, a neighborhood long home to li…

Given the high concentration of carpenter’s glasses, one can only assume most of the night’s visitors had come to see One Basquiat, the new exhibit organized by Eugenie Tsai, John and Barbara Vogelstein, and sponsored by Yusaku Maezawa, that features a single painting by Jean-Michel Basquiat. For those impressed by money, the sheer capital worth of the painting dominates experiences of the canvas. Otherwise, lit from the sides in a dimmed room — the scene came complete with rows of communal benches — the piece has something like the effect of an altarpiece or religious iconography. AJ: “All I can think about is the fact that I’m staring at like thirty million dollars.” The NYPD officer stationed stoically in the corner appeared to agree.
Click to expand...

Outside over a smoke, a quiff-cut in a Carhartt administered strong words on the “anti-nicotine circlejerk.” “All My Friends,” Brooklyn’s dance anthem de rigeur going on a decade, could be heard faintly through the entrance doors: the cue for anyone whose career arc hadn’t peaked in 2007 to leave. We were just in time to catch the end of a Rangers Game at Lincoln Park Bar & Grill. A current of warm air — unseasonable in its equatorial humidity — had slunk into Manhattan from the south, and we walked freely for a while. “Don’t you have a Tinder date?” AJ asked me around 3:15. “It’s Coffee Meets Bagel, and I don’t want to pay for condoms. Isn’t art enough eroticism for the night?” With eyebrows furrowed, AJ was forced to concur.
Click to expand...

mine is much better

Backporch in Bolivia performing a free show at Brooklyn Museum’s Target First Saturday. At 7:12 p.m. on a Saturday we convened at AJ’s apartment in Boerum Hill, a neighborhood long home to li…

gus and I exemplify two distinct types of white man

youre the type of white man i call ethnic hat man

Its true. 3 non white genres. I could write for the guardian

theres a specific type of haughty white man that loves to wear an ethnic hat.

Gus is what we call art hoe basic

If he was a woman Id probably pull him, theyre dazzled by my taste

well yes, i didnt want to spell it out

'where did you get your hat from linebaugh?'

'funny you should ask... i was trekking in Nepal at the time...'