Your Journey to the Alt-Right.

They flourish in Bristol, the climate is conducive to them.

Well, they used to. Maybe they've all been gassed by the bourgoisie london families who've emigrated there and knocked down the squats.

They hide in Totnes and that fancy island on the Thames

South coast has loads of hippy enclaves, minus Portsmouth and Southampton which are pure Grim Britannia

Isle of White didn’t convert to Christianity until about 800AD

Corpsey said:
They flourish in Bristol, the climate is conducive to them.

Well, they used to. Maybe they've all been gassed by the bourgoisie london families who've emigrated there and knocked down the squats.
Click to expand...

Corpsey said:
I'm a natural sub that's why I want a woman in jockey costume to flog me while I wank
Click to expand...

i do flog him while he wanks but i coudnt find a jockey costume that fits.
D

Still remember all those accents on Waterloo Bridge. Big day out in "that London".
D

luka said:
i do flog him while he wanks but i coudnt find a jockey costume that fits.
Click to expand...

They tend to be tiny guys. A bird would be best.

Corpsey is more buxom that I had imagined him in that photo.

WashYourHands said:
South coast has loads of hippy enclaves, minus Portsmouth and Southampton which are pure Grim Britannia

Isle of White didn’t convert to Christianity until about 800AD
Click to expand...

Nah it was about 660, but it was the last place in the British Isles to be converted.

(And it's 'Wight', but that's a forgivable error.)

Plenty of people there look just like that.
L

article in the nytimes today about "Tommy Robinson", (probably) hiding money in Russia and playing into their propaganda efforts.

Now that Mr. Trump is out of office and the American money is apparently drying up, Mr. Robinson and some other far-right figures are turning to Moscow. Mr. Robinson, who is fighting a potentially costly libel case in London this week, did a media tour of Russia last year but three associates told The New York Times that part of his agenda was kept secret — to seek accounts with Russian banks.

“Why else would you visit Russia?” said Andrew Edge, a former senior figure in the English Defence League and another far-right group, Britain First, who said that he discussed moving money to Russian banks with Mr. Robinson and Britain First’s leader, Paul Golding.

In many ways, Mr. Robinson is now useful to the Kremlin — which has often encouraged fringe political figures who might destabilize Western democracies — for the same reasons he was welcome in Mr. Trump’s Washington.
Click to expand...

A fash called Andrew Edge. Wonderful. Just imagine if he were ennobled to a lordship.
L

Meanwhile, a wave of hate crimes against East Asians in America. We live in very strange times.

I really don't know in which thread to put the following story about Burchill being sacked from The Telegraph for being too edgy (her word) or racist (everyone else's word) but seeing as how her career began vaguely on the left as one of the NME's hip young gunslingers and now appears to be slowly and pathetically coming to an end on the other side of the political spectrum as she shows herself unable to meet the Torygraph's famously undemanding journalistic standards, I thought it was fair enough to try and squeeze it in here. 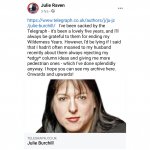 There is always something painfully embarrassing about someone totally out of touch flailing around in search of the "edge". It's even worse when their claim to have found it turns out to boil down to them being an incredibly boring racist prick.
I wonder what "hip young" Julie would have thought of this latest iteration of herself if at some point she had been able to see her through her seventeen year old eyes; of course we can't be sure, but if she did happen to think that she was a tedious and thoroughly unpleasant arsehole who had completely wasted any talent which she may once have possessed and whose "interestingly ambiguous" positions had long ago been revealed as naked racism, then, for once in her life, she would have been right.
B

Was she ever hip? It's a genuine question, her NME era was before my time and anyway I grew up preferring Smash Hits