craner said:
This segment could easily be from RT if you didn't know otherwise:

"While voter fraud deniers continue to proclaim the perfection of the US election system" is such an incredible set up for the rest of the piece, fair play to them.

They love America so much that they hate it.

Staff member
This is super cool

Incredible Biden hasn't conceded yet, with all this evidence of fraud, hundreds of sworn witness statements. Shameless, really. 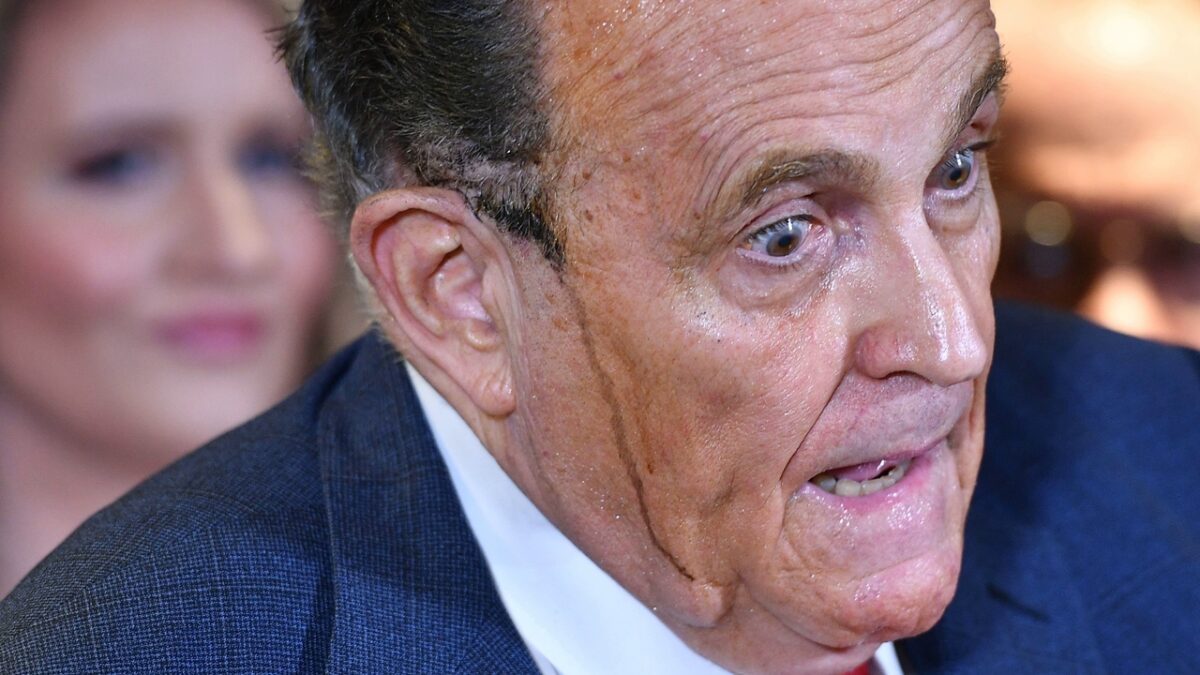 A dark fluid dripped down Rudy Giuliani's head during a Thursday press conference, prompting social media users to speculate what it could be.

A dark fluid dripped down Rudy Giuliani's head during a Thursday press conference, prompting social media users to speculate what it could be.

sometimes you just have to step back and marvel at what a clown car it's become.

They called themselves an “elite strike force team.” But the madcap news conference by President Donald Trump’s attorneys on Thursday afternoon was more campaign farce than cogent legal argument, as Rudy Giuliani offered several conspiracy theories and a litany of false claims that he pledged would reverse the outcome of the 2020 White House race.

In the 90 minutes that followed, the former New York mayor and his colleagues spun a web of mistruths that made mention of the Clinton Foundation, liberal megadonor George Soros and the late Venezuelan strongman Hugo Chávez.

And although Ellis described their remarks as merely an “opening statement” on behalf of the campaign, the discursive briefing — during which streams of what appeared to be hair dye dripped down both sides of Giuliani’s face — betrayed almost immediately the desperation of Trump’s flailing effort to undermine President-elect Joe Biden’s victory.

Trump campaign officials looked on aghast as the circus-like affair unfolded. At one point, the campaign’s own audio livestream of the news conference was interrupted by unknown voices remarking about the hair dye that seemed to be running down Giuliani’s face. The Trump campaign later claimed on Twitter that the people who could be heard mocking the former mayor “were NOT campaign employees.”

Trump chose to put Giuliani in charge of his legal battle last Friday following a string of courtroom losses. People close to the president saw Giuliani’s promotion as a tacit admission that Trump was going to lose and that he was more interested in pushing a PR narrative that the election was being stolen from him than pursuing further lawsuits.

But senior Trump aides have rolled their eyes over Giuliani’s assertions and have derided his antics — especially his news conference earlier this month outside a Philadelphia landscaping business — as embarrassing. Within the confines of Trump’s Arlington, Va., campaign headquarters, there is growing annoyance over Giuliani’s legal team, which has been described as disorganized and frenzied.
Click to expand...

He started going on about My Cousin Vinny too didn't he?
L

well worth $20,000/day, right? this is where your hard-earned money goes, MAGA donors.

Anyhow, the Georgia recount confirms Biden won by 12,800 votes... cue loads of Trumpletons saying "well it would wouldn't it eh eh?". When will these cunts fuck off and die?

Trump now lost 31 lawsuits (or is it 32?) with only the single solitary half win he had before... is there some point where they can say "I suspect that your strategy may not entirely be one of good faith"?

Tucker Carlson just now: He says his show has repeatedly asked Sidney Powell for evidence of her vote rigging claim. He says that she refuses to provide evidence, got angry with his staff, and told them to stop contacting her.
Click to expand...

It's a fair point. I mean Biden is pretty notorious as a Satan-worshipping Muslim atheist, after all.
L

“Their basic argument is this was a conspiracy so vast and so successful that there’s no evidence of it,” said John R. Bolton, Mr. Trump’s third national security adviser, who was ousted last year.

“Now if that’s true, I really want to know who the people are who pulled this off,” he said on Sunday on ABC’s “This Week.” “We need to hire them at the C.I.A.”
Click to expand...

She's so brave and inspiring.

Leo said:
“Now if that’s true, I really want to know who the people are who pulled this off,” he said on Sunday on ABC’s “This Week.” “We need to hire them at the C.I.A.”
Click to expand...