Kaleidoscope maybe? A horrible one.
L

Federal investigators are examining communications between US lawmakers and Capitol rioters​

A former State Department aide during the Trump administration has been arrested in connection with the pro-Trump riot at the U.S. Capitol, according to an FBI spokesperson and documents.
Federico Klein was arrested Thursday in Virginia, an FBI spokesperson said. The FBI would not discuss the case, and court documents did not appear to be online.
Click to expand...

Sometimes I wonder what this guy is doing now. Is he somewhere crouched behind his "meme cannon" like one of those Japanese soldiers that carried on fighting WWII until the seventies?

IdleRich said:
Sometimes I wonder what this guy is doing now. Is he somewhere crouched behind his "meme cannon" like one of those Japanese soldiers that carried on fighting WWII until the seventies?
Click to expand... 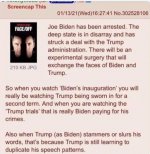 Great... I was hoping you would come through, but that is still from Jan, how about right now?

IdleRich said:
Sometimes I wonder what this guy is doing now. Is he somewhere crouched behind his "meme cannon" like one of those Japanese soldiers that carried on fighting WWII until the seventies?
Click to expand...

i feel ill after reading that

In other news, water is wet.

The report did not name those people but seemed to be a reference to the work of Mr. Trump’s former personal lawyer Rudolph W. Giuliani, who relentlessly pushed allegations of corruption about Mr. Biden and his family involving Ukraine.

“Russian state and proxy actors who all serve the Kremlin’s interests worked to affect U.S. public perceptions in a consistent manner,” the report said.

A companion report by the Departments of Justice and Homeland Security also rejected false allegations promoted by Mr. Trump’s allies in the weeks after the election that Venezuela or other foreign countries defrauded the election.

The reports, compiled by career officials, amounted to a repudiation of Mr. Trump, his allies and some of his top administration officials. They categorically dismissed allegations of foreign-fed voter fraud, cast doubt on Republican accusations of Chinese intervention on behalf of Democrats and undermined the allegations that Mr. Trump and his allies spread about the Biden family’s work in Ukraine.

The report also found that there were no efforts by Russia or other countries to change ballots themselves, unlike in 2016. Efforts by Russian hackers to probe state and local networks were unrelated to efforts by Moscow to influence the presidential vote.

Some of the information in the intelligence report was released in the months leading up to the election, reflecting an effort by the intelligence community to release more information about foreign operations during the campaign season after its reluctance to do so in 2016 helped misinformation spread.
Click to expand...

Leo said:
In other news, water is wet.

If this doesn't summon @luka back just to tell you you're a deluded, tinfoil-hatted, conspiracy-theorist whackjob, I don't know what will.

Mike Lindell is suing Dominion for violating his first am... some utter bullshit I can't be bothered to type. Alan Dershowitz is involved somehow. The moron snowflakes who will weep like babies when it's dismissed are wanking themselves dry at the prospect of the evidence finally coming out and the election being overturned.

It took me a while to realise that Dominion filed a suit against Fox for $1.6bn

Dominion Voting Systems has filed a $1.6 billion defamation lawsuit against Fox News, arguing the cable news giant falsely claimed in an effort to boost faltering ratings that the voting company rigged the 2020 election.
Click to expand...

Now it may surprise some of you to know that I'm not in fact a legal expert, nevertheless I'm going to kindly favour you with the benefit of my opinion on this one. And it is this; they're going to have a lot more trouble making it stick against them than they are with Powell, Wood etc etc
My feeling is that Fox can kinda legitimately say that they were reporting what was being said by Powell and the rest of the crazies - now we all know of course that they knew full well it was a load of bollocks, and that they gave it way too much importance and treated it way more seriously than any reasonable person would have done. But they can just about point to a couple of extremely minor hosts way down in the pecking order who came on for five minutes at 0430 in the morning once and whispered something like "Well you know, it is conceivable that Chavez didn't change the votes and maybe just maybe Biden did actually win" as some kind of vague gesture towards making a tiny pretence of almost being a little bit like something that was thinking about considering the possibility of even-handed unbiased reporting.
Of course they filled hour after with blatant lies of one kind or another and I'm pretty sure that plenty of their so-called reporters went way beyond opinion in terms of the way they expressed their belief in a fraudulent election. But it's so hard to nail the channel itself in this way. Although hopefully I'm wrong.
But overall, when you compare their position and the number of excuses they can offer and the different directions in which they can wriggle out of it, to the situation that Sidney Powell finds herself in, having repeatedly, on every platform available to her, said "This is what definitely happened and I have mountains of proof" the difference between them is actually quite stark.
And I was thinking about Powell's actual defence claim which is that she believed it and took it to court for that reason but no one could assume it to be an actual fact until it had been tested in court. That just doesn't wash does it? Cos she said things like "I have a video of the Dominion CEO bragging about how the capability of his machines to switch votes" - that's not something that needs to be tested in court, that's just an outright lie.
P

Leo said:
In other news, water is wet.

Donnie rode his lightning - until he couldn't and he lost.
Vlad thought all just might continue another 4 years and appears he got wrong footed too ( like the ChineseCP ).
We'll see what happens w him ...

Had expected him to make a move on Latvia or Lithuania while there was open chance.
He could play while the sun was shining and get in Crimea, Ukraine, come across as a 'broker' in Trans Dniester as well as gain more footholds would amount to live fire practice time for is pilots, years ago already @ Syria, more recently @ Libya.

Belt and Road, Arctic Silk Road we'll see what they cook up next

There can be a good deal of shaking here and there some shakedowns too,
ongoing Proud Boys arrest(s), a Boogaloo boy eruption where some guys wear overalls matching their rifles.
The pendulum is still swinging.