Muser drives around in a VW camper with this on loop.

Were you aware also of the critical scaffolding that people had erected around your earlier output? The poignant retro-futurism angle, the comparisons to kosmische—was that something you wanted to get away from?

Yeah. It just felt like the lowest common denominator angle on it, and the thing that would most easily graft over to people who might not know what it was but wanted to make some kind of inroad. And I was like, "Really? That's what all of this gets shrunken down into?" Even in a community that really has the time and focus and energy to consider things, it seems that in music especially there's this jargon that gets duplicated. And it was very upsetting to me. Not all of it was wrong, and aspects of it were actually quite enlightening, to me anyway. Like, "Oh, maybe I am just this person on a timeline of events that's dealing with history in this specific way." And it was comforting. But also it reached some sort of threshold that I was not willing to cross.
Click to expand...

"Maybe I am just this person on a timeline of events dealing with history in this specific way." Whats this timeline? I get the general history of experimental music, but as Version said earlier, OPN seems to be influential in the formation of "internet music:"

version said:
...'internet music' (or whatever you want to call it) and aesthetics. The (semi-)ironic fetishisation of certain aspects of the 80s and 90s, e.g. video nasties, Carpenter soundtracks. The vids are littered with consciously 'weird', ironic comments, video game references etc from accounts with anime avatars and whatnot.
Click to expand...

So where is the precedence for that? What was OPN grabbing out of the ether and working into his project that could be properly called 'internet music?' Call it Computer World meets Stockhausen, but was there anyone making that synthesis before OPN, Hype Williams, AG Cook, Vaporwave and etc? Maybe some plunderphonics?

I saw OPN maybe five years ago, maybe during Garden of Delete, at a decent sized venue. He had Nate Boyce absolutely shredding on guitar. It felt like a pastiche of the big stadium rock sound filtered through the prism of Return to Forever or something. A lot of wink wink nudge nudge. I also prefer the Sunset Corp stuff but probably because it is easier to digest. I definitely think he does great stuff but it is hard for me to be generous about it because he younger than me, smarter than me, and a Brooklyn hipster.

Linebaugh said:
So where is the precedence for that? What was OPN grabbing out of the ether and working into his project that could be properly called 'internet music?' Call it Computer World meets Stockhausen, but was there anyone making that synthesis before OPN, Hype Williams, AG Cook, Vaporwave and etc? Maybe some plunderphonics?
Click to expand...

For the music itself, or the whole semi-ironic thing in the visuals and discussion?

I saw him in leeds in 2014 or so. I went cos i wanted to see the support more (cut hands/william bennett) but the gig was seated, in some opera hall, so was a really weird atmosphere gig. Brightly lit, all these moody hipsters in beanies sat down with their lagers in plastic cups, ushers looking flustered. Helm opened, was very good, just droning about. Cut hands was unbelievably disappointing, sort of like karaokeing with himself and flailing/dancing, but it was so quiet it was pointless. Was gonna go but ended up staying for opn and it was better than i thought it would be, basically a well built droney set that got really loopy towards the end. Just weird tho, cos the venue straightjacked everyne, including him. At the very end some lad down the front let out a ‘whoop’ and he smiled and it was like, why are we listening to this sort of music in this venue?

Ive tried to get into him a few times and cant really muster much enthusiasm. He feels like american lee gamble / 10s version of dj shadow. Much prefer hype williams/dean blunt, but i wouldnt even bracket them the same music. I love those safdie films hes done the tunes for but i dont actually like the soundtracks all that much, find them too intense. Definitely uncut gems the music really spoils it, takes it out of the time theyve carefully crafted. . I do quite like that ecco jams tape but you gottabe in the mood cos its so bewildering.

I keep thinking there must be an obvious precursor who's on the tip of my tongue, but I can't think of one. All I can think of is the ongoing reevaluation of so-called "low culture".

His YouTube likes / favourites playlist under sunsetcorp was great , full of weird corporate adverts from the 80s
B

seems to be the breakout star from the post berlin wall collapse art gallery muzak producer to independent film composer pipeline, it's fine. glad gay perry's doing well. guess this'll have to do for my first post, hi all.

I feel there's probably some older media collagists out there that would fit but I just cant name any. I think whats different about these guys is with the internet they're the first to take what may have just been forgotten in niche art communities of the past and reach an audience approaching the mainstream.

Type on this album cover is extremely striking, and worth attention.

Feels like following the Caroline Polachek album and several others, we're at the point where "Art Nouveau via the 70s meets 00s McBling" is a full-blown trend.

Was referring to this one, although I'm now not clear if it's actually the cover or if it's other collateral. 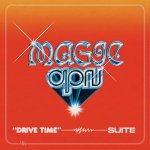