Update on the above; I went past the cafe again today and I summoned up the courage to ask him if he had listened to it and, if so, what he thought - I say "summoned the courage" cos although I am not particularly a shy person or lacking in confidence as a rule, with this sort of thing I really am and, as I asked, my subconscious was screaming at me that, without any shadow of doubt, he was certainly going to launch into a massive tirade about how I ought to be ashamed of myself for bringing this abomination into the world and inflicting it on innocent, honest working people such as himself. By the time the words were out of my mouth I genuinely believed that he was going to at the very least demand his money back and, in fact I would be lucky if he didn't challenge me to a duel so that he could extract a righteous revenge.
Of course none of that did happened, he said that although he had not opened the record itself he had listened to the music online and it was supercool. Phew.

IdleRich said:
Kinda funny, I go to the PO to send a record, but, cos Portugal is so badly hit by the virus and stuff they've brought in new rules to send packages. Woman at the PO says it's too much for her English to explain and it's definitely too much for my Portuguese, so she phones her husband who speaks perfect English, he starts asking about the package, I say it's a record, he says "ooh, really, I'm into records" and he asks me what kind of thing it is and he says "Ooh Japanese psych" and then he starts telling about how 25 years ago he brought one of Acid Mothers Temple to play in Portugal - this is all on speakerphone as the queue gets longer and longer. Seemed like a nice guy. Took ages to send the package, by the time I left there were literally thirty people queuing out of the door and down the street... gonna be perona non grata in this town if I'm not already.
Click to expand...

Oh yeah, in the end I gave this woman a copy for her husband, i was hoping that in the future that might mean they gave me some kind of preferential treatment or something but sadly it made no difference (though I had no complaints previously, in fact arguably they were already treating me better than most of the other customers).

OK, I'm sure that you are all dying to know what is going on with Jaguar No Me and Invisible Sounds at the moment, and I am more than happy to fill you in.

First up, Berlin based DJ Eric Volta got in touch to say how much he liked the track Machigaeta from the album - in fact this is the track everyone seems to dig, Vladimir Ivkovic included it on a mix and I understand Lena Willikens has played it on her show.

So yeah, Eric Volta loves the tune and he is gonna do a remix more suitable for his sets, and that gave me the idea of getting a few more people to do their rerubs of that or other tunes from the album. When they are ready there will be a digital release of an EP of remixes (possibly a physical release too, not decided on that yet).

The plan is to do some gigs in the new year to flog the EP and also the album, basically the ones we hoped to do originally when the album came out; one in Berlin, one in Lisbon and Porto, and then hopefully one in London and maybe Paris depending how the early ones go. Ideally the band will play each time with us DJ-ing plus hopefully some of the remixers too.

Finally, Taishi has also made some t-shirts, they are not specifically band t-shirts as such and are mainly gonna be sold through boutiques etc but they do say Jaguar No Me on them and they are available through us, so if you fancy a great design (pics coming soon) in black, pink or various other colours - so you can look cool like me or Liza - I suggest you move fast... 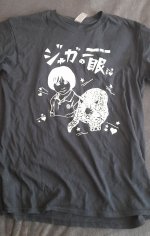 That's the tee in black, also you can get pink and maybe white I think.
Edit: dunno where I got that from, it's pink or black only, no white
Last edited: Oct 13, 2021

do the cat hairs come with the shirt or do they cost extra?

Leo said:
do the cat hairs come with the shirt or do they cost extra?
Click to expand...

That's how you can tell it's mine.

New video from Jaguar No Me