And for anyone up for a (possible) post-lockdown bassline field trip: 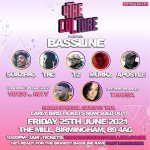 There's a Travelodge and a 24 hour McDonalds within a five minute walk from the venue so don't be put off if you've never been to Brum before.
R

been going through and enjoying a lot, cheers!

I never really engaged with bassline. I liked some of the tunes, but it wasn't something I immersed myself in like I did dubstep, despite bassline being what was actually going on around me, what people I knew were into, and dubstep being this distant thing relegated to the internet.

Nowadays I prefer bassline, but at the time it was mostly just something I'd hear jumping in and out of cars buying weed or in the background at parties. The people I knew who were really into it were also into hardstyle, which was another where I liked some of the tunes, but didn't really feel much of a pull from. Nobody was into grime beyond Dizzee once he blew up and maybe one of Lethal B's tunes. Nobody was into dnb. Nobody was into techno. Nobody was into dubstep. It seemed to be firmly between bassline and hardstyle or NME indie. I'd be curious to know what all those people listen to now, if they listen to music at all.

The charting version of My Destiny was slightly different wasn't it, it doesn't quite have the same giddy romance of that one.
B

Are there any good bassline compilations that aren't mixed? I mean, obviously the way to enjoy this stuff best is hearing four different basslines crash into each other while in a club fleetits, but it does feel like there was minimal attempt at preservation outside of a few DJ Q mixes
R

boxedjoy said:
Are there any good bassline compilations that aren't mixed? I mean, obviously the way to enjoy this stuff best is hearing four different basslines crash into each other while in a club fleetits, but it does feel like there was minimal attempt at preservation outside of a few DJ Q mixes
Click to expand...

Most of these tracks were incredibly difficult to come by in unmixed digital form during the scene's heyday but there's been a substantial attempt by the majority of producers to release retrospectives in the last five years or so. There's also quite a few compilation albums still hosted on Juno etc with unmixed tracks.

What a wonderful time to be alive
R

version said:
I'd be curious to know what all those people listen to now, if they listen to music at all.
Click to expand...

What's the distinction between bassline and speed garage? Some of these tunes are even verging on 2-step at times, e.g. 2:00 on this one.

version said:
What's the distinction between bassline and speed garage?
Click to expand...

Speed Garage - invented in 1996 by Armand Van Helden and then produced almost exclusively between 1997 and 1998 by London based ex-hardcore and jungle producers (although there are European deviations.)
Bassline House - produced between 2002 and 2007 by predominantly white Northern and Midlands producers. Combines elements of earlier speed garage and organ house records popular in clubs such as Niche in the late 90s.
Bassline - produced between 2004 and 2010 by predominantly black Northern and Midlands producers. Influenced by the earlier 4x4 dark garage produced by London based producers in 2001 - 2003 - latter incorporated MCs from the Up North and Midlands grime scenes.
Last edited: Sunday at 1:21 AM

What distinguishes the tunes themselves though? What would you find in a bassline tune you wouldn't in a speed garage tune? Less swing?
B

I feel like bassline has more midrange and wobble whereas speed garage has deeper Reese tones and breakdowns with phased pad chords. But it's very much a difference that works as "I know it when I hear it"
B

Yeah, I mean I listened through the whole lot last night and this evening and there was stuff I would have thought was speed garage had I heard it outside the context of the thread.
B

I once heard a DJ play ten speed garage songs in a row then launch into Head High "Rave (Dirt Mix)" which I would never had aligned with this stuff but at that time it made perfect sense, I guess no dance music can exist in a vacuum after all
R