sufi said:
I think what i'm getting at is that the borrowing is all rather superficial - a few names in weird syllables,maybe some odd customs or outfits,
by the late 20thC these writers had access to deeper understanding if they could be arsed (assuming they never bothered to travel)
Click to expand...

it's colour rather than something deeper, but i think my PoV is also superficial; @Rich was sayiing that the WoT is based bon Hindu concepts, whch would surely entail something deeper than cherry picking shiny exotica like magpies

Yeah but I suppose it's quite interesting in that he nicked the philosophy and didn't credit it (as far as I know, I've never read an interview with him to be fair)... but then with the names and stuff it's much more signposted but also much shallower.

there's a factor about cherry picking from Mid-East that doesn't apply to China or India or vikings - our whole (white Euro-merican) culture is built on a millienniums-old mid-east fetish - Christianity after all is some sort of bastardisation of an old East Mediterranean cult,

so any Mid-east borrowings in scifi need to tread very gently around the current reality conditions, and needs to create some sort of a distance from those borrowings which form the foundations of our "western" culture - i spose that's why they end up going for the shallow and the cliche?

Staff member
Frank Herbert is the canonical example, but he really engaged with the source material in a pretty deep way.

In Wheel of Time there is a race of psycho desert warriors who fear streams and stuff from their own lands cos they have never seen more than one drop of water at a time. Basically Fremen.

Mr. Tea said:
Frank Herbert is the canonical example, but he really engaged with the source material in a pretty deep way.
Click to expand...

The knife that can't be sheathed until it's drawn blood is not his idea originally is it?

IdleRich said:
I've only read four of the fourteen books
Click to expand...

yeah I also read the 3 or 4 (as a tween, so it's been a while) and that's a pretty good summation

I gave up on it because it becomes increasingly unwieldy the further you go - he had a worse version of George R.R. Martin syndrome where you just keep adding characters and factions and settings and plot elements until the main story is buried under an avalanche of detritus and you're forever interrupting it to check in on what 50 mildly interesting side characters are up to. at a certain point as a reader you just think to yourself why am I grinding through all of this.

also everyone is always turning out to be someone else in disguise or possessing their body or actually a reincarnation of some ancient hero, no one remotely important ever actually dies despite everyone being super awesome at fighting, etc.

like Rich I'm making it sound terrible but it's not. the writing is a tier down from GRRM but that's still toward the higher end of genre fiction. it's all basically recycled but as Rich says enjoyably enough. it centralizes women which is a nice change from most fantasy.

and the Aes Sedai are obviously Bene Gesserit, right down to the men can't do magic because it kills them/drives them crazy bit

Oh yeah I should have mentioned that.
The female magic people are in a weird order called Aes Sedai and they are kinda feared but respected by the normal people even though they might be considered as the only bulwark against the Dark One.

IdleRich said:
The knife that can't be sheathed until it's drawn blood is not his idea originally is it?
Click to expand...

Sounds like a very old idea, but I dunno.

luka said:
a fantasy Africa but they are relatively underdeveloped
Click to expand...

I'm looking forward to reading it at some point. A History of Seven Killings is great, and it's hard to see how this can go wrong.

I assume it's more on the order of Michael Chabon crossed with Octavia Butler, i.e. a "serious literature" foray into genre fiction

That sounds great although I haven't read seven killings yet.

I'm sure it is, I thought I was maybe being ignorant in not knowing where it originated but it's possibly one of those things that has been done so many times that no-one knows.

sufi said:
by the late 20thC these writers had access to deeper understanding if they could be arsed
Click to expand...

i.e. when yr Howard, Tolkien, etc types were around there were no genre tropes. they were inventing them. they had to draw on mythology, history, etc.

authors still use real-world inspiration ofc just saying that you can i.e. lazily reference Tolkien instead of going back to Beowulf or whatever

as luke said obv you have to expect parallels, similarities, tropes, stock characters in genre fiction - that's what makes it genre fiction

I was going to start a thread "which Skyrim race are you?" but then it got far too complicated and interesting when I started looking at 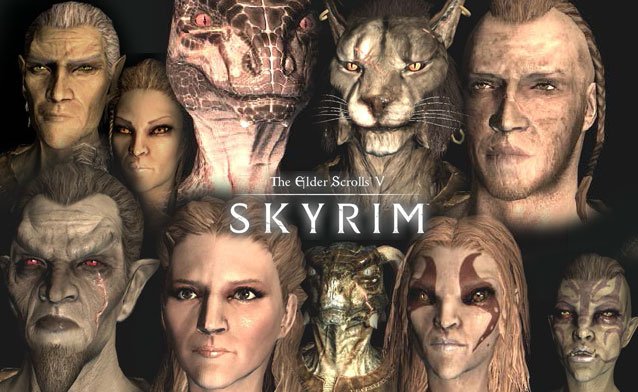 For other uses, see Race. There are ten different playable races in The Elder Scrolls V: Skyrim. Each one possesses its own unique racial abilities and powers. Each race starts with +10 in one skill and +5 in five other skills. However, this doesn't mean that a race is restricted to a certain...

Corpsey said:
it got far too complicated
Click to expand...

I instantly became engrossed in all the complicated history of the races.

I've got a really nerdy aspect to my personality that I've not allowed to gain control of my life but which I've sometimes thought I would have been happier to give free reign.

I mean to say that I could easily have been a guy with a big beard working in a comic book shop.

oh yeah I never want to nerd shame anyone

you just cannot engage that dude about anything at all related to 40K unless you're ready to get into it, which I am not

it's not like I'm above it myself. I once talked to a dude at a party about Deep Space Nine for like 2 hours.

In my more indulgent moods I love that stuff, though. There's a sort of purity to it - people enjoy exercising their imaginations, that's about it. There's no sense of profundity to Warhammer (that I'm aware of, anyway?)

But then it's easy to detect a stunted adolescent quality to this stuff too. You're either more or less aware of how utterly meaningless it all is. There's a pressure to pay attention to the real world as an adult (probably a good thing) - that's the issue I have with video games these days. If i could silence that nagging voice in my head telling me there's more important things to do I would unreservedly love them.
You must log in or register to reply here.
Share:
Facebook Twitter Reddit Pinterest Tumblr WhatsApp Email Share Link
Top