cocktail (n.)
"strong, stimulating, cold American drink," first attested 1806; H.L. Mencken lists seven versions of its origin, perhaps the most durable traces it to French coquetier "egg-cup" (15c.; in English cocktay). In New Orleans, c. 1795, Antoine Amédée Peychaud, an apothecary (and inventor of Peychaud bitters) held Masonic social gatherings at his pharmacy, where he mixed brandy toddies with his own bitters and served them in an egg-cup. On this theory, the drink took the name of the cup.
Click to expand...

​
The thread for cocktails.

Pay homage to legendary drinks, or devise your own. Submit recipes to be listed and credited, including but not requiring backstory or any otherwise ornamental verbiage. Or perhaps there is an accompanying ritual.

What histories have these spirits? What ethereal potlatch may they convene? What trials have they promised our viscera?

If nothing else, beta ingesters are always welcome.

The name Jägermeister in German literally means "Master Hunter", "Hunt Master" or "master of the hunt". It is a title for a high-ranking official in charge of matters related to hunting and gamekeeping. The term Jägermeister had existed as a job title for many centuries. In 1934 the new Reichsjagdgesetz (Reich Hunting Law) re-defined the term, applying it to senior foresters, game wardens, and gamekeepers in the German civil service. Hermann Göring was appointed Reichsjägermeister (Reich Hunting Master) when the new hunting law was introduced. Thus, when Jägermeister was introduced in 1935, its name was already familiar to Germans, who sometimes called the product "Göring-Schnaps".
Click to expand...


Sloppy Wopshire
1 oz whiskey (of any regional variation - that is, until the origin of surname Wopshire can be established) dropped into a dark ale, honey to taste. Untested.


Violet Fog
A variation of the London Fog (Earl Grey tea, cream, vanilla syrup) which includes a dash (or two for the bold) of Creme de violette.


Death at Two Thirds to Five
A variation of Ernest Hemingway's Death in the Afternoon (sparking wine, splash of absinthe) which includes a dropper (?) of CBD oil. Untested.

There's a guy currently working his way through every drink in Pynchon's bibliography, 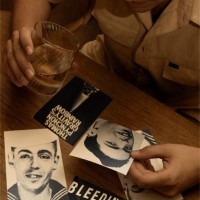 Every drink in every Pynchon novel.

I’m maybe 50% of my way through a tequila zombie as I begin this post, and I must confess to feeling a little woozy. These past months of drinking along with Tyrone and Maxine and Jeremiah an…

We Australian Pynchonites have been waiting patiently and less patiently for Inherent Vice to reach our shores. It did finally appear in Melbourne in a moonlight preview last week, but I was alread…

I had a feeling he'd have a good lineup, but I didn't know any. I've heard of the Singapore Sling, never tried it though.

You're probably well poised to craft a few Pynchonian cocktails, putting the proper thought into them.

constant escape said:
I had a feeling he'd have a good lineup, but I didn't know any. I've heard of the Singapore Sling, never tried it though.
Click to expand...

Think I first heard of a Singapore Sling via HST. Pretty sure he mentions drinking a bunch toward the start of Fear and Loathing in Las Vegas.

He also seems like a good canon to mine for recipes.

@IdleRich must know a few cocktails.

So long as they are Dissensus originals. This is a budding, first-rate establishment.

And I think it would be cool to have feedback on them, so they can all be improved. Perhaps if there is disagreement, a schism will occur.

No name: poppyseeds washed with posca (water and a few tablespoons of vinegar, in the Roman tradition)

suspendedreason said:
No name: poppyseeds washed with posca (water and a few tablespoons of vinegar, in the Roman tradition)
Click to expand...

Does this achieve any kind of opiate effect, or does that depend on how poppyseeds are ingested?

Poitin, neat, made in a garage in Tipperary.

WashYourHands said:
Poitin, neat, made in a garage in Tipperary.
Click to expand...

Any kind of ultra-local spin you can put on it, perhaps something to do with Tipperary culture? Or a dissensian spin, perhaps? Haven't heard of poitin before.

Often referred to as Ireland’s mezcal or moonshine, poitín is created using grain or potatoes as a base. Visit Master of Malt online now and browse a huge selection of poitin.

Puts hairs on your chest but no-one will want you as an organ donor.

constant escape said:
Any kind of ultra-local spin you can put on it, perhaps something to do with Tipperary culture? Or a dissensian spin, perhaps? Haven't heard of poitin before.
Click to expand...

Lethal home brew from taters isn't it?
So you want me to make up a cocktail or suggest one I like?

@WashYourHands have you a name for poitin, neat? Thats really the qualifier, here.