The Louis CK stuff is really funny. Don't believe it for a second.
S 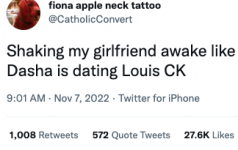 there's not much of a way to talk about it though, the vocabulary isn't there
S

i saw jesse malin outside 2A on 2nd st eating some noodles the other day. i've got no interest him really except that i saw him play at the oxford zodiac once 20 years ago, i just know who he is
S

i saw justin bieber walking through greenpoint once i swear, he looked at me knowingly
S

but then i thought i spoke to roy hodgeson outside a pub in dorset, my friends told me the person i spoke to was just some old man that was nothing like roy hodgeson
S

I saw Harvey Keitel walking a dog in TriBeca.
S

I saw Lee Ronaldo jumping the queue at webster hall

Leo said:
I don't understand how he keeps going, running a store there at 90 years old.
Click to expand...

it's a wonder to behold, and i'll be heartbroken when he's gone, as i reckon ray's is one of the purest, most beautiful remnants of the pre-giuliani era which still exist in that neighborhood.
S

one of the first times i took mushrooms i bumped into the white stripes in camden, jack white was very muscular and i was still at school, he deigned to shake my hand like the dignified men we were
S

i met boris johnson several times around the same period, four times in a year i think, for various reasons. i asked him why his party had just voted for shrooms to be illegal. he seemed like a buffoon even then, i called him a teddy bear, i asked him why the badgers were paying such high taxes on bacon, I treated him with the right level of respect
Last edited: Nov 11, 2022
S

(to be fair it was Kim Gordon playing so he has the right)
Click to expand...

I had dinner with Lee and Leah at Odeon.
S

shakahislop said:
i assisted philip schofiled on and off a small boat while dressed as the toad from the wind in the willows to promote a museum
Click to expand...

Is he part of the Brooklyn Cultural mafia?
S

IdleRich said:
Is he part of the Brooklyn Cultural mafia?
Click to expand...

i don't know you'd have to ask @suspended, he is the gatekeeper of these things

The full story is the wife and I are friends with Alan Licht and Angela Jaeger, and Alan has played with Lee in various groups. We went to see them in their group Text of Light do a performance at the old Whitney, and the six of us went to dinner at Odeon afterwards (Lee and Leah live close by). So, like, two degrees of separation.

Now that the tall one from Sonic Youth has moved to Stokey every person I know has a story about meeting him in a pub and chatting to him for hours over a few pints - what I'm saying is that the mystique of SY has gone and noone cares anymore.