A copy of the Phil Baker bio from Strange Attractor press has fallen into my hands.

Just read a bit of the intro from Alan Moore who compares him to Blake.

It seems like a lot of people here will know something or other about him, there's mentions here and there but no dedicated thread.

Im primarily interested in his automatic drawing and other art but only recently found out about his work on sigils.

Automatic drawings, sigils, cats, London pubs - the book you cited is superb for Spare’s old haunts - and insane portraits. Try and immerse yourself in as many prints of his as you can find. I never get bored of them.

He served in WWI as a medic and may well have had undiagnosed ptsd imho. His war portraits are gut wrenching. Maybe have a look for the Kenneth and Steffi Grant’s book, I’ve got a pdf somewhere. Give me a bit and I’ll have a look for it.

Have you read Nadia Choucha’s text on surrealism? That’s a really well researched dance sideways once you’ve scoured through these, although Spare is cited sparely. Solid companion piece of a kind, if you know what I mean.
C

Yeah I really like his drawings and prints, but don't know too much about him otherwise. 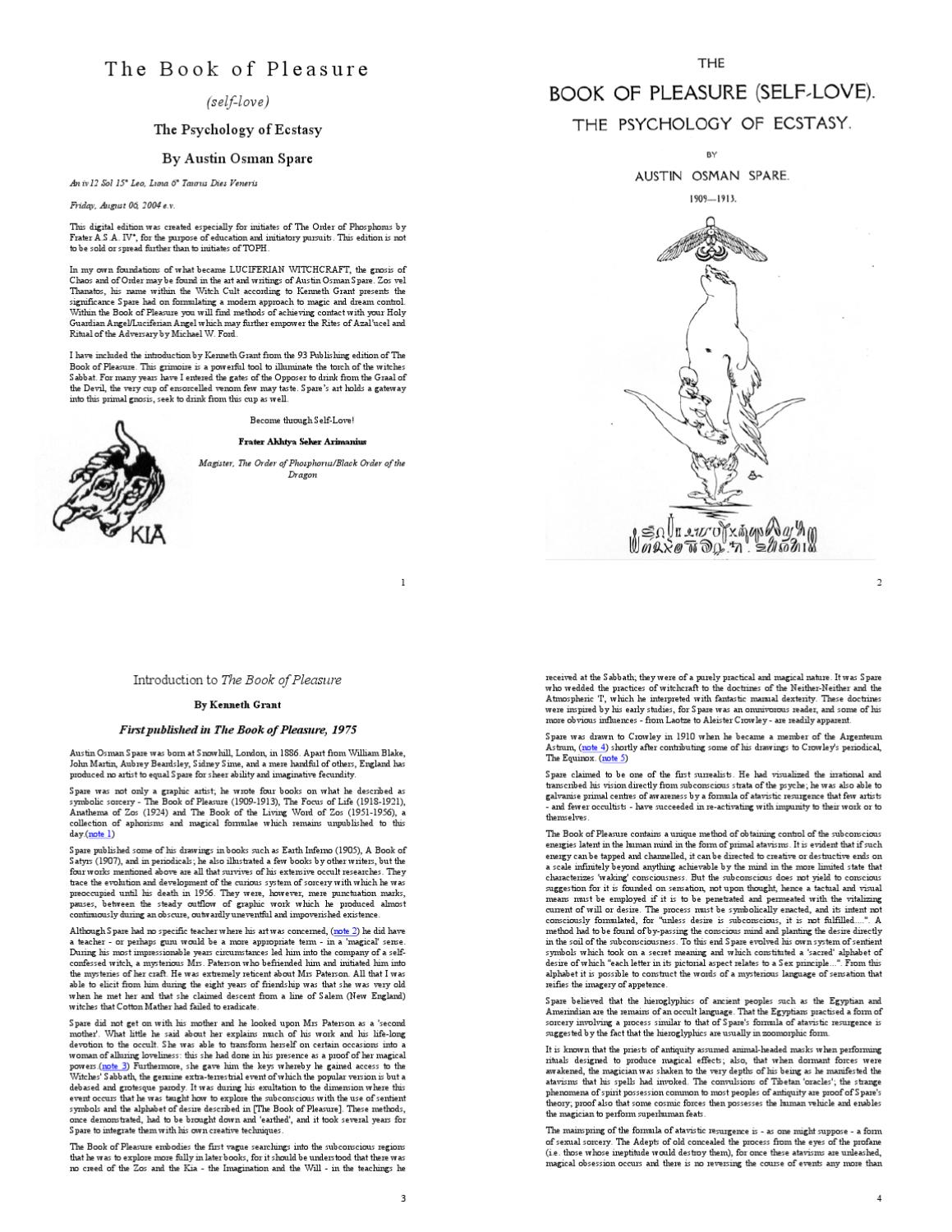 It was either @WashYourHands or @DannyL who was explaining to me his relation to Crowley. I had assumed Spare was more or less adopter and elaborator of Crowley's methods/techniques, but apparently Spare strayed from Crowley in some way, although I'm not sure how passionately, violently, etc.

I've only read Two Tracts on Cartomancy, wherein he talked about divination and magic in general being a sort of excursion beyond the limitations inherent to reason/science. Sort of gets into what I was ranted about in the media landscape thread, about the significance of random signal generating. I've recently been thinking of divination in those terms: some means of arbitrary signal reception, a sort of scrambling of logical, predictable decision-making.


I still only have a narrow and blurry insight into how divination can be maximally operationalized, perhaps even integrated into a larger metarational framework, but as far as I can tell there could be some real benefits to a proper divination.

I'd imagine that Spare's take on goin beyond reason would be the extra-institutional mirror image of, perhaps, Godel's incompleteness theorem. That is, Godel's take would be an inside-outward movement, from the framework of science, where Spare would be an already-outside-outward movement, I suppose. Granted, I'm not really familiar with Godel aside from whatever philosophic treatment of his work I've been exposed to.
D

I met Phil Baker some years ago, after the publication of his book. He was surprised when i said, I'd read Spare and got a lot out of him. I think that's the only downside of his book - he doesn't take seriously the idea that Spare had a coherent philosophy for all it might be expressed in a convoluted style. One of the earliest essay on him was Lionel Snell's "Spare Parts" which was first published in the 70s. Lionel says in that that that looking at Spare's second book Earth Inferno, he felt he was trying to articulate an experience he didn't have words for. He's still groping towards that in The Book of Pleasure in my view.

Probably my favourite piece of writing about him is Steffi Grant's memoir at the beginning of Zos Speaks. It's amazing - it really does evoke a vanished world, a crumbling decaying bombed out London. It's wonderful.

And Crowley and Spare - people talk all sorts of shit about them - "they were lovers" etc which is straight up grade A bollocks. They'd met, Spare did a few illustrations for Crowley's journal Equinox IIRC but Spare basically thought he was an insufferable exhibitionist prick. Which to be fair,seems an accurate impression, borne out by most of the Crowley biographies. Spare disses Crowley, and magicians like him, in the second or third chapter of The Book of Pleasure,describing them as "the unemployed dandies of the brothels". I would by happy one day, to have coined such a phenomenally expressed insult.

You can't really overstate how different their magical systems are from each other tbh. Spare didn't so much stray as reject wholesale and wander off and invent another discipline. He puts a big black line through the whole elaborate Victorian edifice of Golden Dawn magic, burns down that temple, pisses in the corner of the vault of the Adepts. Wanders off down the Walworth Road and crafts something a million times more intuitive and immediate in his Brixton backroom. Outstanding.

Good stuff, looking forward to getting stuck into this bio (interesting what u say about the writer btw!) but will look out for the steffi grant piece you mention danny.
D

It's in a book called "Zos Speaks: Encounters with Austin Osman Spare" - Kenneth & Steffi Grant. Zos was one of his magical names.
D

(...his initials just with the A swapped out for a Z, showing that kind of backward turning that's in his magic)

Didn't we go to an exhibition of his together in South London Dan?
D

Yeah, was on that gallery on Walworth Road, so kinda close to him geographically.

me and luke went on a date to see AOS pictures at the creepy absinthe joint on mare st,
could not get out of there fast enough tbh
D

it's funny actually when you think of that exhibition. Astounding draftsman and painter, yet he's had so few shows in London that I remember and nothing in the Tate or any major collections as far as I know. Makes me wonder how many other completely forgotten artists there are.
D

sufi said:
me and luke went on a date to see AOS pictures at the creepy absinthe joint on mare st,
could not get out of there fast enough tbh
Click to expand...

Was it Victor Wynd? Full of taxidermy and general mad stuff?

that's the one
D