I was just looking at the Wiki page and they've supposedly got a shot of the last second of live broadcast before it was switched off. 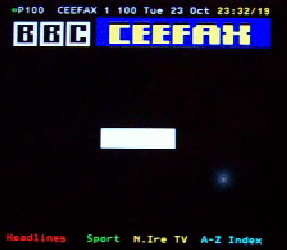 Ceefax is certainly something that is perhaps more powerfully of its era than almost anything else.
When I was really little ceefax was just kinda broadcast on shit channels when nothing was on, but later on, when I realised that it was (or maybe it simply became) possible to turn it on and interact with it, that was really exciting.
To tie in with what I was saying in Sufi's thread about blunted cutting edge, I remember visiting my Grandparents in Manchester and me and my uncles checking the score in the United game using Ceefax - in (as I remember it at least) almost the last minute, Man U got a win cos of a goal by an unknown sub whose name was mangled by the software - we were all saying "Who the fuck is Lion Riggs" - both obsolete now of course.
B

I loved the Planet Sound pages on ch4 Teletext. The main reviewer John Earls somehow managed to review a handful of albums every day and find 60ish words to say about all of them and keep it interesting even if you disagreed with his stance etc. And the music forum page on it was probably my first serious experience of fan culture and being actively engaged with music in a way that I couldn't be humoured in my everyday life at school etc.

When I was 17 i got a gig review published on it and won a tenner and I think that means more to me than the bylines I've had anywhere else.
B

I mean now I have Spotify and all the internet at my fingertips and if I want to learn about anything then listen to it then I can. But in the days of five channels and limited online access it meant a lot that I could read about bands I had never even heard of.

I definitely used to read the reviews and stuff. I can't remember the chronology (actually a common theme in my life in various fields) but I genuinely was excited to realise that one could flick between pages and read the stuff. And they had maybe quizzes and crosswords and I can't remember what else but it was something. I suppose I'm using Ceefax and Oracle interchangeably here by accident. Sorry for that.
.

boxedjoy said:
I mean now I have Spotify and all the internet at my fingertips and if I want to learn about anything then listen to it then I can. But in the days of five channels and limited online access it meant a lot that I could read about bands I had never even heard of.
Click to expand...

Don't get me wrong. 95% of those bands would have been terrible. But still!

I don't remember the bands at all, i just mean the interaction with the reviewer was so exciting.
As a child when I read the Hitchhikers Guide To The Galaxy I was entranced by the idea of this world in your pocket, it seemed so magical to me, and in the end the iphone came along and it was that and I was (relatively) blase about it... but some time before that Ceefax suggested that and I was still young and innocent enough to find it exciting.