luka said:
dont just say mr tea youre actually getting on my nerves a bit here, say mr tea i want to douse you with petrol and burn you alive. i think its more fun and paradoxialy a lot less agressive and hostile
Click to expand...

You've got a surprising amount of pent-up rage for such a spiritually evolved being!

well its not pent up is it. i discharge it in healthy wholesome ways

luka said:
well its not pent up is it. i discharge it in healthy wholesome ways
Click to expand...

Unwinding at the end of the day with a good angry wank.
W

A couple of articles I stumbled across this morning - apologies if they have already been mentioned... I almost spat my coffee out at the mention of Trump...

Do psychedelics make you liberal? Not always 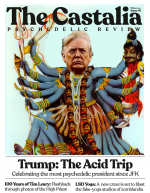 There already seemed to be a somewhat lefty analytical trend of Trump and magical thinking, and this trend may be widened now that Trump is in the rearview mirror, i.e. its less controversial to talk about maybe.

Thinking of things maybe a degree or two removed from Hermitix, which I wouldn't really describe as left or right, although I'm uncertain as to why.

william_kent said:
A couple of articles I stumbled across this morning - apologies if they have already been mentioned... I almost spat my coffee out at the mention of Trump...

Do psychedelics make you liberal? Not always

From a piece that your first link links to:

Clearly, actual Nazis would be considered hard cases for any well-meaning clinician seeking to cure ideological disease. What then, of conservative authoritarian Intellectual Dark Web-types such as Jordan Peterson, Sam Harris, and Joe Rogan?
Click to expand...

Not often that "intellectual" and "Joe Rogan" appear together in the same sentence!

I dunno that I'd describe him as a conservative authoritarian either.

Peterson identifies as a classical liberal, as does one of the other dudes in that dark web cast photo.

Apparently there's a letter Burroughs sent to someone where he says Leary was a fed who was so fried he forgot he was a fed.
W

version said:
Apparently there's a letter Burroughs sent to someone where he says Leary was a fed who was so fried he forgot he was a fed.
Click to expand...

There's a whole "Leary was a CIA agent and snitch" conspiracy theory - the snitch part can be proved as he did rat out people he knew to the FBI:

After being extradited from Switzerland and returned to a US jail, Mr Leary decided to cooperate. He told FBI agents this was not only because he wanted to be released, but also because he had developed a desire for a collaborative and honourable relationship with law enforcement officers.

"I prefer to work, I'm never going at it illegally ever again," Mr Leary continued in his statement, " but I would prefer to work constructively and collaboratively with intelligence and law enforcement people who are willing to forget the past."

I've always wondered how he got a copy of GR in prison. He claims a guard just tossed it into his cell when he asked for something to read, but I dunno.

The way I read Gravity’s Rainbow is pretty interesting. At one point, the American government was trying to get me to talk. They were putting incredible pressure on me. This FBI guy said if I didn’t talk . . . “we’ll put your name out at the federal prison with the jacket of a snitch.” So I ended up in a prison called Sandstone. As soon as I got in there, there was a change of clothes and they said, “The warden wants to see you.” So the warden said, “To protect you, we’re going to put you here under a false name.” And I said, “Are you crazy? Are you gonna put me on the main line?” And he said “Yeah.” I said, “What name are you going to give me?” He said, “Thrush.” And you know what a thrush is? A songbird. So I said, “Uh-uh. In a prison filled with dopers, everybody’s going to know that my name isn’t Thrush. I refuse to do it.” He says, “OK. We’ll have to put you in the hole.” And I said “Do what you gotta do — but I want to be out there in my own name. I can handle any situation. I can deal with it. I’ve been in the worst fucking prisons and handled it so far. So I can handle it and you know it. So fucking put me out there!” And he said, “Sorry.” He was very embarrassed because he knew. He was a prison warden. His job wasn’t to get people to talk or anything like that. He knew it was a federal government thing. The reason they were trying to get me to talk was to protect the top FBI guys that had committed black bag burglaries against the Weather Underground. So they wanted me to testify in their defense. They actually went to trial, if you remember, and got convicted. And were pardoned by Carter.

Well, they put me in the worst lock-up that I’ve ever been in, and I’d been in solitary confinement for over a year and a half. This was just a clean box with nothing but a mattress. The only contact I had with human beings was, five times a day, I could hear somebody coming down the hall to open the “swine trough” and pass me my food. And I’d say, “Hey, can I have something to read?” And they’d say, “No.” One of them was this black guy and, this one night, he came back. I could hear him walking — jingle, jingle, jingle — walking down the metal hall. He opens up the trough and says, “Here man,” and throws in a book. A new pocketbook. And it’s dark, so I waited ’til dawn and picked it up. And it was Gravity’s Rainbow.

how do you think it happened Vergil?

I don't know. It just doesn't sound right, does it? They were threatening him, locked him in solitary and wouldn't give him anything to read then some guard just happens to be walking around with a copy of Gravity's Rainbow...

He seems like he's full of shit anyway, so I wouldn't be surprised if he just asked a friend to send him a copy or if he read it at home at some point then claimed he read it in prison.
W 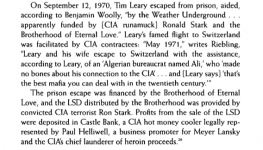 From The Covert War Against Rock - Alex Constantine

pynchon was the guard

You would need a big book if it was the only thing you had to occupy the mind. One time spent a night in the cells and asked for a book and they had this.... I dunno Colin Forbes or Clive Cussler or something that someone else had left (why?) and I read more than half of it. Always wondered how it ended in fact.

linebaugh said:
pynchon was the guard
Click to expand...

He says the guard was black.

version said:
He says the guard was black.
Click to expand...

pynchon wore a cape in public, whose to say hes above a little black face.

luka said:
well its not pent up is it. i discharge it in healthy wholesome ways
Click to expand...

I agree with luka here, I think the hyperbolic expressions of rage can actually be net healthier than the more civil and smoothed-out expressions.

Please tell me we're not really taking anything Leary said at face value.