The nth lockdown started in Portugal yesterday. For most of the rest of the time I've managed to cope with it all one way or another. I've enjoyed watching films, reading books, reading the internet, even trying my hand at some writing - and when I get really desperate I go on dissensus and talk to you lot.
But this time round, I don't know why, something in me snapped today and I couldn't stare at another screen or page or whatever. I just had to go out and feel some fresh air on my face and see the sun which is actually trying to come out again at last. So I went to the marshes by the river once again, just before the place where V likes to go jogging there is a huge abandoned commercial zone (I suppose) - the area must be the size of twenty or thirty football pictures I'd imagine, there are a number of decaying buildings and loads and loads of empty space with broken glass and other types of rubble. And quite a lot of graffiti too. It's beside the road to the park and you can see the small town of Povoa Santa Iria. When I went out I drove there for a bit, climbed over the most half-hearted "keep out" fence you've ever seen and then walked around taking photos for about an hour or so just before the sun started going down properly. To be honest they're not that exciting, in a way the most interesting thing is the sheer size of the place, along with the quietness and all the nature which surrounds it and is trying to take back over. More likely though it will actually be developed into the nature walk along the Tagus which they're trying to make happen at various points north of Lisbon... which I suppose, as long as it's done respectfully enough isn't the worst possible result.
Anyway, here's some pics, hope they're not too shit @luka

This was the entrance thing I suppose - security and that 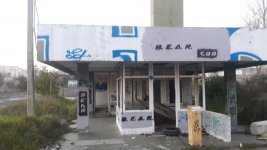 Looks as though the staff had their own bus stop here 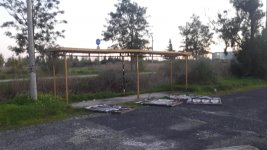 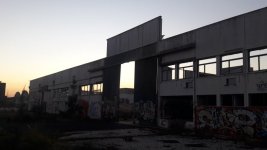 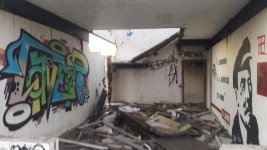 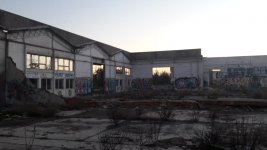 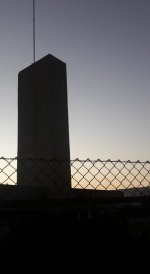 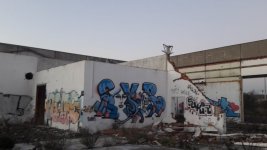 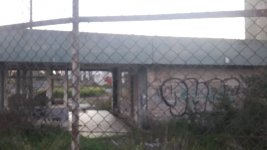 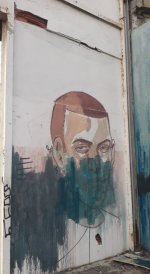 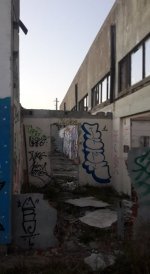 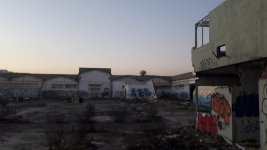 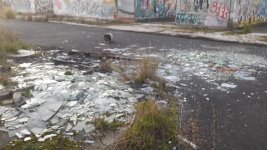 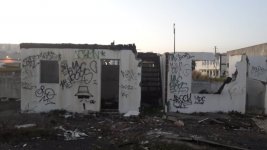 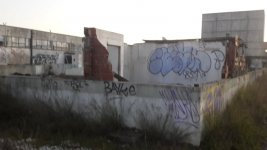 Not sure what all this shit is 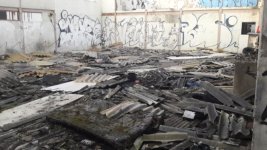 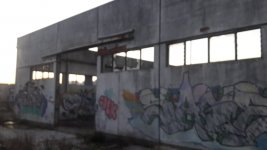 Apologies if I repeat any, I've already lost track of which I've posted....

Some of this brutalist(?) architecture must have looked quite good when it was functioning I'd imagine. Not sure if it was just concrete though like you get in the UK sometimes of if it was covered and painted 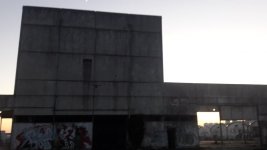 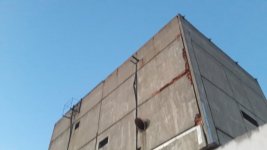 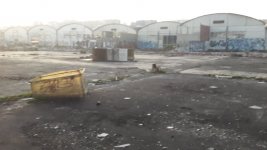 People must have had a field day doing graff here cos there is so much space and nobody checking up too I imagine. 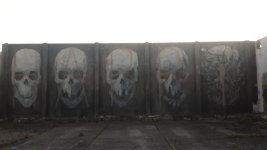 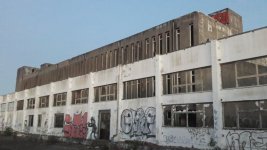 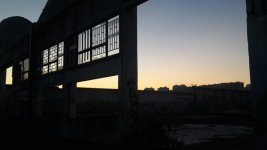 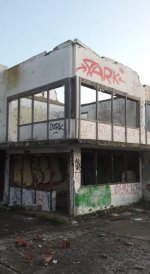 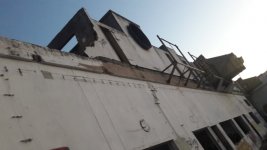 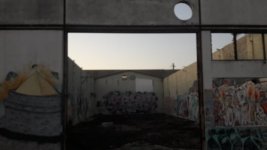 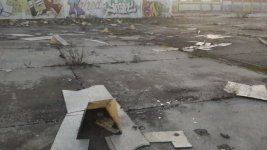 These two are great.

You need a camera that does the composition justice.
C

Yeah that 2nd one picked out by version. Immediately put me in mind of the monolith in 2001.

Well I'll never be a photographer - it's just my broken phone recording where I've been.

Just in case anyone wants some idea of the scale of the place I circled it on the map from using google street view.... dunno if it helps or not really, but that whole area within the red circle is abandoned and has been since we moved here.

Is it infested with street punks gutter rats and wastoids?

I've been past it loads of times and I've never seen a single person there... but when I took these pictures, weirdly, there were a few other people wandering around walking their dogs or throwing stones at the wall or whatever. I think must be cos of lockdown.

It looks like a post-Conformist world, as if a revolution has swept through. Similar vibes around north Nottinghamshire pit workings.

I really don't know what happened there... nothing whatsoever about the history of that particular thing. Dunno if it was economics or the bird reserve or a combination of both that did for the place or when it happened.

We are staying in Caldas da Rainha for a couple of nights. It's really only an hour or so from where we live so there wasn't any particular need to stay, we could have just done a day-trip but this way is more fun. Anyway, we are staying in the main square and just next to it is a rather attractive almost victorian looking park which I believe grew up around the Thermal Hospital - also slightly victorian tinged (to my eye) and, as is so often the case with abandoned institutions I find its appearance rather intimidating. I think it was somewhere that people used to visit under their own steam (no pun intended) to take the curiously smelling waters and a number of associated cures so it was hardly Bedlam... and yet I can't help but think of that weird film with Dane Dehaan with all the eels in the water when they drill his teeth as a punishment.

Also nearby there is a museum filled with the steampunk torture instruments the doctors used to use and, in fact, some building which is seemingly some kind of still operating sanatorium using the same spring for healing waters. We went in there to see if we could explore but I think it is only for paying patients. It was filled with a powerful stench of rotten eggs from the water but what I could see looked quite intriguing...

In fact this a very strange town, or a town that has some very strange bits. Last night we wandered through another park and we resolved to come back and explore today, it's a pleasant enough walk with a load of abandoned bits of what were once clearly more manicured gardens. Maybe part of the hospital grounds at one time.