IdleRich said:
Hill of Dreams is pretty dark I remember...
Click to expand...

I didn't think so at first, but then I've just reached the bit where he starts to use gorse brushes in an unusual way:

“From a steep and wild hillside, not far from the house, he had cut from time to time five large boughs of spiked and prickly gorse. He had brought them into the house, one by one, and had hidden them in the big box that stood beside his bed. Often he woke up weeping and murmuring to himself the words of one of his songs, and then when he had lit the candle, he would draw out the gorse-boughs, and place them on the floor, and taking off his nightgown, gently lay himself down on the bed of thorns and spines. Lying on his face, with the candle and the book before him, he would softly and tenderly repeat the praises of his dear, dear Annie, and as he turned over page after page, and saw the raised gold of the majuscules glow and flame in the candle-light, he pressed the thorns into his flesh.
Click to expand...

At such moments he tasted in all its acute savor the joy of physical pain; and after two or three experiences of such delights he altered his book, making a curious sign in vermilion on the margin of the passages where he was to inflict on himself this sweet torture. Never did he fail to wake at the appointed hour, a strong effort of will broke through all the heaviness of sleep, and he would rise up, joyful though weeping, and reverently set his thorny bed upon the floor, offering his pain with his praise. When he had whispered the last word, and had risen from the ground, his body would be all freckled with drops of blood; he used to view the marks with pride.
Click to expand...

Here and there a spine would be left deep in the flesh, and he would pull these out roughly, tearing through the skin. On some nights when he had pressed with more fervor on the thorns his thighs would stream with blood, red beads standing out on the flesh, and trickling down to his feet. He had some difficulty in washing away the bloodstains so as not to leave any traces to attract the attention of the servant; and after a time he returned no more to his bed when his duty had been accomplished. For a coverlet he had a dark rug, a good deal worn, and in this he would wrap his naked bleeding body, and lie down on the hard floor, well content to add an aching rest to the account of his pleasures.
Click to expand...

He was covered with scars, and those that healed during the day were torn open afresh at night; the pale olive skin was red with the angry marks of blood, and the graceful form of the young man appeared like the body of a tortured martyr. He grew thinner and thinner every day, for he ate but little; the skin was stretched on the bones of his face, and the black eyes burnt in dark purple hollows. His relations noticed that he was not looking well.”
Click to expand...

it's really good though - very sensory and lots of tangents that bundle around. he was forest bathing alright.

I don't remember that particular scene. I think when I said it was dark I was really thinking more of the atmosphere of hopelessness and melancholy which I found really more disturbing than his more overt horror books.
W

over the last few years I've been experimenting with neural networks, machine learning, GANs, etc, but the latest breakthroughs have been obsessing me the last few weeks:- VQGAN + CLIP: text to image generation ( I should really start a thread titled "post drawings your computer has done" ) -
i've been feeding a neural network prompts from this thread with mixed results ( hit to miss ratio can be high ) but a couple of outputs today are almost worthy of posting, so, fuck it, here's goes.. 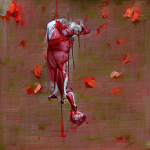 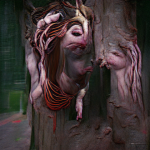 beneath the bark lives a wood nymph (AI generated ) 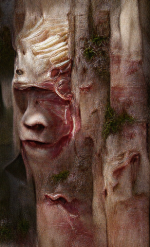 He sees the skin of little boys, the lucid white skin, vellum-like, in the pale, smooth bark of the slender beeches ( AI generated ) 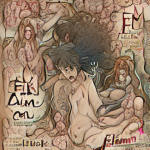 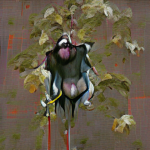 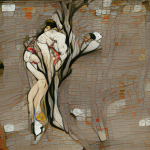 Oh wow they are amazing. All of a type, but not one I've seen. So do you know anything about tensorflow and dd?
W 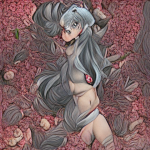 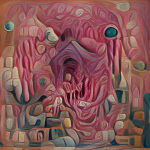 kiss the leaves above your dripping elm crotch ( AI generated )
Click to expand...

This is quite klimty/viennese
C

Amid the sanguinary falling leaves he feels that he has been spattered by a shower of blood ( AI generated )
Click to expand...

This is amazing. Bacon comes to mind straight away with the reds and feeling of meat.
W

catalog said:
This is amazing. Bacon comes to mind straight away with the reds and feeling of meat.
Click to expand...

Ok, you've sussed me out! I may have used the phrase "in the style of Francis Bacon" when prodding the neural network...
W

catalog said:
This is quite klimty/viennese
Click to expand...

caught me out again!

and i may have used the phrase "in the style of Egon Shiele" when prodding the neural network with that one.. 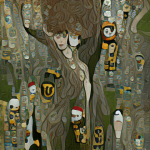 He sees the skin of little boys, the lucid white skin, vellum-like, in the pale, smooth bark of the slender beeches ( AI generated )
Click to expand...

This one is pretty sinister. Its the no eyes that does it. The hint of a dogs face above the human one cements the AI feel.

The nets tend to push certain things, you start to recognise their quirks. Things we might consider cute, but pushed into a off/weird area

Do you you do requests @william_kent ?
W

Do you you do requests @william_kent ?
Click to expand...

I can do - just need a phrase and, optionally, the name of an artist

Ok, if all’s good (and certainly no rush)

All around the great oaks sang them to sleep and dreams (Ernst, possibly)
Last edited: Jul 31, 2021

catalog said:
This is amazing. Bacon comes to mind straight away with the reds and feeling of meat.
Click to expand...

Bacon with a side of Giger.
C

I've finished "Hill of Dreams" now and will definitely be reading some more Machen. He's like a link between Dickens and Ballard.

It does get a bit bogged down and dismal in the last third or so, with a very downbeat ending, but there's some good fevered writing and his themes are really strong and coherent.

Like this recurring thing he keeps going on about, where he's traipsing the streets of London, his dreams of being a writer slipping away from him, and he's comparing the desolate streets and sound of the wind with the forest from when he was a child.

"It was strange how in the brick and stucco desert where no trees were, he all the time imagined the noise of tossing boughs, the grinding of the boughs together."

There's a lot of repitition, like he often seems to fixate on a word and reuses it constantly, so it becomes a thing in itself... But reminiscent, for me, of Billy childish. That hint of madness.
C

Finished this forest bathing book by the main japanese professor who has done all the research, Yoshifumi Miyazaki at Chiba university, near Tokyo. It's one of those you can read in 2 days, like a Guardian long read or repeater book. Don't know if I would actually recommend it to buy, but your library might have one (that's where i got it).

He's inspiring cos he failed, twice, to get into the Uni he now teaches at.

He got a massive grant from the Japanese government to do a huge longitudinal study across 60+ Japanese forest. The research is very simple, like GCSE level. One group of people get sent into an urban area, another into a forest. And readings of brain activity, saliva etc are taken before and after.

The conclusions are pretty consistent across a range of people and settings:

exposure to nature slows down your front brain activity (=marker of stress) a bit and massively boosts your "parasympathetic" brain activity (=drift, flow, governs body organs rather than head).

So forest bathing takes you out of your head.