thirdform said:
More 1991 magic, barking dog rabies amphetamine psychosis funk. This is hardcore, def not 'intelligent' techno. that period between 90 and 91 when techno was still a rave sound - to be reunited somewhat in 93 is the essence really.

This is such a mad sound. Rave machine funk. Ubik way ahead here. This sound is getting hot again, all the hipster Italians in Berlin are doing this now.

Here's a later Ubik track from the first EP I bought by him ('95). This is acid trance mind you, but he does it quite well :

This early Bandulu track was one the very widely distributed on the first "Trance Europe Express" compilation. Pure bliss, better than most Detroit tracks in the same vein

This just slightly at the tail end of the OP timespan. Obviously this guy together with Cristian Vogel and a couple others started making waves on the contintental circuit in the end 90's (and did save techno from Millsian tedium at least for a couple years). I guess this it what goes as "bonkers techno"

Minimal acid funk - I love the claves on this one, a lot of action going on in the treble

Bit of a wierd one-off here. Never manage to grab it on wax:

This is the funkiest white boy techno that was ever around, I'll tell ya


ok enough for me now
T

A soundtrack to trying to get up the stairs of some abandoned warehouse, gently stepping over army surplus clad bodies slumped in pools of their own vomit from the cocktail of Special Brew, Special K, and who knows what else, only to enter a huge space with ten zombies swaying out of time to an out of phase sound system.. 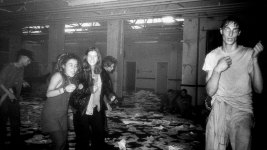 The other half of LFO gets a release on Planet E
Click to expand...

Woebot said:
it's got a cheeky inner city sample in there from "good life" or "big fun"

detroit worship definitely a large component of all this.
Click to expand...

the stab? if it came from Big Fun then it was sampled from Nitro Deluxe originally!

playlist is up to page 2, so far the black dog ones are my faves. their good at the percussion breakdowns aren't they.

woops said:
playlist is up to page 2, so far the black dog ones are my faves. their good at the percussion breakdowns aren't they.
Click to expand...

my favorite Black Dog track (hardly techno, but it'd be nice if techno sounded more like this):