Not the book, the concept.

You see thoughts about this in: Schelling, Goffman, Garfinkel; Gossip Girl, Jane Austen; Eric Berne, @Woebot's Retreat (has a chapter on games), Timothy Leary, Leonard Cohen's Favourite Game. Wittgenstein's & Lyotard's language games. Sontag, in "Aesthetics of Silence," talks about modernism as a game, in which even abnegations of the game qualify as moves:

A genuine emptiness, a pure silence, are not feasible—either conceptually or in fact. If only because the art-work exists in a world furnished with many other things, the artist who creates silence or emptiness must produce something dialectical: a full void, an enriching emptiness, a resonating or eloquent silence. Silence remains, inescapably, a form of speech (in many instances, of complaint or indictment) and an element in a dialogue.
Click to expand...

In other words, "no style" is a style, and naturalism is an affect. In Kubrick's Paths of Glory, the colonel is accused by top brass of playing a politics game, after he pushes back against his superior's orders—although the colonel is acting out of genuine protectiveness of his men, game players will always think you're "in it" with them, and publicly denying your engagement to gain a strategic advantage.

The games & strategic interaction frame was huge in the Sixties (see 70% of the references above) and has since disappeared, resurfacing only in PUA manuals, or the rich metaphorical language of Gossip Girl (recently rebooted). From Jacob Clifton's recap of Gossip Girl S1E2:

If Jenny came there looking to use B for a tool, then that means she’s in the game. And if she’s in the game, then that means she is a tool in turn. If Blair’s going to start a War, she needs soldiers, and here is one offering itself on a platter, with no allegiances and a hunger so deep she’d give herself up to Bass again… Jenny is maybe too young to understand the terms, but hungry enough to make a deal. “An Eleanor Waldorf original is the uniform of B’s private army. But will J be a loyal soldier, or side with S’s rebel forces?” ... I love it when you talk in war metaphors with teenage girls, because… teenage girls invented war. My friend Karen has a t-shirt that says “I Survived Eighth Grade.”
Click to expand...

I've written a bit on "selection games," which I see as the man-made equivalent to natural selection, playing out in job and college apps, dating, friendship, sports, etc. I also think discourse can be usefully framed as a game or form of warfare. There are two dominant cultures of discursive play, and when players from different cultures interact, conflict arises.

Let's talk about games. What kind of games do people play? What counts as winning? Are there overlapping games? What defines a game? Do people play games unconsciously, while in conscious denial (for public relations benefit) as some have argued?
P

The scene in The Devil Wears Prada where Anne Hathaway's character is told by Meryl Streep's that she is in the fashion game whether she knows it or not. To paraphrase Ice-T: everybody is a player to a player.

They grew gaunted and lank under the white suns of those days and their hollow burnedout eyes were like those of noctambulants surprised by day. Crouched under their hats they seemed fugitives on some grander scale, like beings for whom the sun hungered. Even the judge grew silent and speculative. He’d spoke of purging oneself of those things that lay claim to a man but that body receiving his remarks counted themselves well done with any claims at all. They rode on and the wind drove the fine gray dust before them and they rode an army of gray-beards, gray men, gray horses. The mountains to the north lay sunwise in corrugated folds and the days were cool and the nights were cold and they sat about the fire each in his round of darkness in that round of dark while the idiot watched from his cage at the edge of the light. The judge cracked with the back of an axe the shinbone on an antelope and the hot marrow dripped smoking on the stones. They watched him. The subject was war.

The good book says that he that lives by the sword shall perish by the sword, said the black.

The judge smiled, his face shining with grease.

What right man would have it any other way? he said.

The good book does indeed count war an evil, said Irving. Yet there’s many a bloody tale of war inside it.

It makes no difference what men think of war, said the judge. War endures. As well ask men what they think of stone. War was always here. Before man was, war waited for him. The ultimate trade awaiting its ultimate practitioner. That is the way it was and will be. That way and not some other way.

He turned to Brown, from whom he’d heard some whispered slur or demurrer. Ah Davy, he said. It’s your own trade we honor here. Why not rather take a small bow. Let each acknowledge each.

What is my trade?

War. War is your trade. Is it not?

And it aint yours?

Mine too. Very much so.

What about all them notebooks and bones and stuff?

All other trades are contained in that of war.

Is that why war endures?

The judge smiled. Men are born for games. Nothing else. Every child knows that play is nobler than work. He knows too that the worth or merit of a game is not inherent in the game itself but rather in the value of that which is put at hazard. Games of chance require a wager to have meaning at all. Games of sport involve the skill and strength of the opponents and the humiliation of defeat and the pride of victory are in themselves sufficient stake because they inhere in the worth of the principals and define them. But trial of chance or trial of worth all games aspire to the condition of war for here that which is wagered swallows up game, player, all.

Suppose two men at cards with nothing to wager save their lives. Who has not heard such a tale? A turn of the card. The whole universe for such a player has labored clanking to this moment which will tell if he is to die at that man’s hand or that man at his. What more certain validation of a man’s worth could there be? This enhancement of the game to its ultimate state admits no argument concerning the notion of fate. The selection of one man over another is a preference absolute and irrevocable and it is a dull man indeed who could reckon so profound a decision without agency or significance either one. In such games as have for their stake the annihilation of the defeated the decisions are quite clear. This man holding this particular arrangement of cards in his hand is thereby removed from existence. This is the nature of war, whose stake is at once the game and the authority and the justification. Seen so, war is the truest form of divination. It is the testing of one’s will and the will of another within that larger will which because it binds them is therefore forced to select. War is the ultimate game because war is at last a forcing of the unity of existence. War is god. Brown studied the judge.

Is there a difference between a game and a performance? When I'm with very old close friends there's game like mechanics in the mix- roles we adopt, a kind of call and response type protocol- but none of the anxiety and insecurity that I'd associate with 'social games.' Feels instead like were all members of a band performing the hits. Is their a distinction? is it even worth making?

i own the book. its a nasty piece of work but its funny.

poetix said:
The scene in The Devil Wears Prada where Anne Hathaway's character is told by Meryl Streep's that she is in the fashion game whether she knows it or not. To paraphrase Ice-T: everybody is a player to a player.
Click to expand...

Yes! I had forgotten that scene but it is a fantastic example

luka said:
i own the book. its a nasty piece of work but its funny.
Click to expand...

in a sense, a very real sense, everything is a game and can be characterised as such but the book is genuinely toxic and give you a sense of why
that line of thought is reductive and misanthropic if taken too far. so worth flicking through i think

i remember my hero wiley saying he pisses people off on social media cos he treats it like a video game and i thought, me too, i think
i wind people up in that way too. and i do think its a game but not as a game to get ahead and win but to treat it like a game to demonstrate its
game like qualities and to show its not something you should take seriously

does that make sense

luka said:
in a sense, a very real sense, everything is a game and can be characterised as such but the book is genuinely toxic and give you a sense of why
that line of thought is reductive and misanthropic if taken too far. so worth flicking through i think
Click to expand...

suspended said:
Not the book, the concept.
Click to expand... 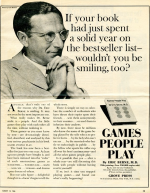 I have thoughts for linebaugh but boarding plane

ya. whenever the devil comes to earth he loves to play games.

I totally thought that you meant Blood Meridian.

luka said:
i remember my hero wiley saying he pisses people off on social media cos he treats it like a video game and i thought, me too, i think
i wind people up in that way too. and i do think its a game but not as a game to get ahead and win but to treat it like a game to demonstrate its
game like qualities and to show its not something you should take seriously

does that make sense

Deliberately treating things as a game and thus of little value is maybe the only antidote to accidentally treating them as a game of enormous value.
L

your typical type-A personality treats life as a game with enormous value, right? it drives them, sometimes even more than money. beating the other guy, coming out ahead.

Slackers play games too though, like "how do I work the least"

I am sorry all

This board deserves better