ive played the one set in boston. its a funny one cos although i enjoyed it it also made me quite depressed cos of the low light, the music, the ruined city etc. it really done a number on me. i like being in beautiful places, san andreas, skyrim, Ptolemaic Egypt, red dead redemptions wildish west

Yeah that was Fallout 4. And there is definitely a melancholic tone across these games. Fallout 3 was even bleaker, set in D.C. and the palate was considerably grayer and browner. The latest one is set in Appalachia with much more color/foliage.

So lately I've been thinking about how big chunks of knowledge can be bundled and encapsulated, as an alternative to constantly going over the information, keeping it active. etc. At a certain point, it simply becomes too cumbersome, if even at varying points depending on the person.

So my approach is this: to build up complex diagrams as encapsulations of knowledge, knowledge capsules, to be set aside and revisited on a less frequent basis. It seems obvious that reviewing a loaded diagram about computer science will jolt that knowledge awake faster than manually and disparately going through all of the information in that diagram.

Similar to how, more generally, learning something for the first time takes longer, and if you stop practicing the intuition decays a bit, but that intuition can be rebuilt faster than it was built.

This is the crux of this new approach I have in mind: that I can accrue knowledge on given topic to build up a familiarity with it, encapsulate that knowledge in a diagram, then set it aside and let it decay, having confidence that when I revisit that diagram I will regain that familiarity faster than I initially gained it.

Here is one I made for the international system of units, stemming from the base units into the derivative units. 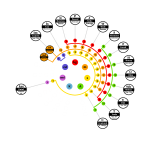 The inner 7 are the base units, and the outer ones in black are the derivative ones. The radial series of circles with numbers are the exponents of the base unit of that color.

So something like this can be done for any given topic. The work/time spent creating the diagram would seem to cement the subject matter into my mind, in a way that can be buried and reawakened.

The task, similar to what the US seems to be striving to do with our economy, is to sustain indefinite growth, and I think these encapsulations will prove valuable in this effort.

Those complex units like capacitance and inductance I still have almost no understanding of.

looks cool, like an auditorium. no use for me though, i can never make head nor tail of diagrams. they make my brain seize up.

I'd like to take inspiration from medieval gnostic diagrams and charts and what, and how ornate and marvelous they are.

luka said:
looks cool, like an auditorium. no use for me though, i can never make head nor tail of diagrams. they make my brain seize up.
Click to expand...

But a good diagram abstracts away the complexity. Very difficult to do, though, especially when the subject matter itself is already complex and slippery

Still don't know why kilogram is a base unit and not gram. Still better than the obstinate imperial system though.

Thats once case where I will leave the land of liberty to fend for itself.

Clinamenic said:
Still don't know why kilogram is a base unit and not gram. Still better than the obstinate imperial system though.

Thats once case where I will leave the land of liberty to fend for itself.
Click to expand...

Clinamenic said:
I'd like to take inspiration from medieval gnostic diagrams and charts and what, and how ornate and marvelous they are.

we painted Dee's Monas Heiroglyhica on Woop's naked chest a few years ago. he was wearing an Egyptian headdress

Something to take seriously. I sense much of the world's high-level business hangs in the balance of first impressions, gut feelings, readings of body language, etc, things more primal than conceptual sophistication.

If you can get people to like you, you predispose their reception of your assertions. This can ease their digestion of your complex messages, make your messages stick better, etc.

One of the reasons I've been turning back, gradually, toward plain language. Still not there yet, but significantly better than many of my earlier posts where I felt little to no need to keep things simple, but was rather more concerned with articulating the most advanced thinking I could achieve, at the expense of simple language.

I think too doubtful a tone undermines the message itself. Body/tone language uncalibrated to the content of the message.

I just thought of this earlier today regarding Cornel West, who is able to convey advanced philosophic concepts with such a sense of wonder and joy that the listener is effectively receptive to and interested in concepts that they would not be if, say, Judith Butler was speaking, or any number of other academics
You must log in or register to reply here.
Share:
Facebook Twitter Reddit Pinterest Tumblr WhatsApp Email Share Link
Top