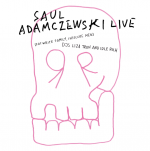 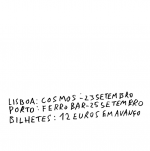 I can't even imagine how debauched this is going to be

Looks like someone has 'written' an article about this gig for some magazine... although it would be fairer to say that they just translated my press release into Portuguese and pretended it was news. Dunno what this thing is or why they are writing about it but any publicity is good right?
https://www.thresholdmagazine.pt/20...a-dois-concertos-em-portugal-em-setembro.html

Also, it seems we are gonna be interviewed on national radio about this gig, which is kinda crazy.

IdleRich said:
Also, it seems we are gonna be interviewed on national radio about this gig, which is kinda crazy.
Click to expand...

This very Thursday. If you are in Lisbon move fast cos it's all but sold out. They are hoping that they can increase the capacity slightly beyond what was legally allowed when we started advertising so there may be a few on the door on the day but... fuck it noone reading this is anywhere near.
Anyway, he's arriving in a few hours and it looks like we are about to enter the long dark tunnel...
C

I bet it's gonna be a very large few nights for you.

It is looking rather that way... calm before the storm now, went to the beach, got my hair cut and so on, and then it begins.
We supposed to be on two radio shows tomorrow but I think we cancel one, it's just too much, the other one is full national radio. Though I guess I won't say much.
What with his habits of losing passports, getting kicked off flights or just forgetting to go places I'm just relieved he's nearby...
C

I've given that rough Trade zine of interviews with him and lias away now, but I remember his story of doing iboga in the American desert, in order to try to get off geroin, and then leaving with a load of people who had all done the same and they just went and scored a load more heroin

I didn't read that story but the impression I get is that that stuff does seem to work in terms of (quickly) breaking the immediate physical addiction, however, if you are gonna go back to the same place you were before and hang around with the same people you were hanging around with before, then, addicted or not, chances are you gonna do the same stuff you did before.

I had a friend in London, well actually a friend of my flatmate so I didn't see him that often, and one time I did and I knew he was trying to get clean and I asked how it was going and he said "Yeah yeah, really well, haven't used for ages... but the sad truth is that life on heroin is much better than life off it". The point is that there is a huge psychological part to that particular addiction as well as the physical part. Or rather most addictions are mainly psychological but h has a big physical part too so the former is often overlooked.
C

Yeah that's like when cutty is trying to go straight in the wire and this gardener guy who has been giving him work says to him how he used to be "downtown" as well and he's "uptown" now ie got a normal job but the truth is that it's just really hard and boring.

I gotta admit I never understand those AA or whatever groups either - if I was trying to break an addiction to something thd last thing I would want to do is sit around and talk about it with a load of other people who also love it.

It makes perfect sense in Breaking Bad when Jesse starts advertising their meth at the meth group, in Choke the people at the sex addiction group all start banging each other, and like you say above, the h group went out and bought some together.
C

it's like a new american religion, AA and all those other groups. i read this comic a while ago about this guy's obsession with "sharing" and joining ever more addiction groups cos he got addicted to the dopamine hit that comes off reception to a confession

Well I'm sure there are advantages, but I can see immediate problems too.

There is a local rock n roll DJ called DJ A Boy Named Sue who is a big local face, loads of hangers on etc etc

This guy is a massive fan of FWF and my girlfriend said to Sue that he could interview Saul on his radio show - promotion for us and Sue gets to meet Saul, tit for tat as Trump woukd put it. He practically came in his pants and was desperate to do it - and he also said that he could swing us an interview on the actual proper national fm radio thing. I guess equivalent of BBC 3 or something, I dunno.

So this show is at 11pm today. My girlfriend went to beach with Saul and this guy Tim who is a DJ and who drove them both down from Spain. I was just getting ready to go and meet them, and also Sue, at the radio station...

But gf just phoned and said apparently there are a max of three guests allowed... and Sue made executive decision to tell the station that it would be Saul, me and Sue. Which is ridiculous cos Liza has organised everything and she has spoken with Sue loads about the event as a whole and the radio show and so on, but his rock n roll sexism has kicked in and he reflexively put me for no reason. Saul is now saying "Fuck that sexist guy, I want Tim to come" - so now Liza has got to sort out the rock n roll egos and prevent it kicking off and negotiating who actually goes on the radio..

Thank fuck I didn't go to the beach today and get caught up in all this.
Last edited: Wednesday at 10:55 PM

Dunno what was decided but you should be able to hear it here.... there could actually be a fight in the studio

In fact, I had the wrong end of the stick; in case anyone is interested, when they went in they weren't live but in fact some content was recorded - basically an interview with Saul - which will be broadcast at some point during the day tomorrow, with various excerpts played throughout.
At least I think that is what she said, to be honest she had done so much k she couldn't really talk properly.
Last edited: Yesterday at 3:30 AM
C