none us can come rich your the only one who lives in portugal.

Was good man, full and he did a really sort of surprising set but had everyone captivated
S

Has anyone been to bed yet?

You know what? It's been relatively well behaved. He sent us a kinda rider request type thing for when he arrived on Tues with a list of substances and it specifically said NO SMACK, which was probably a good thing. Most of the rider was gone way before the gig so... not that well behaved, but it was very gruelling last night in a way, just the pressure to make it good, especially for him just to be there performing in front of everyone, but us as organisers had that feeling too, even though all the tickets were gone in advance so it couldn't really fail. But I found that (to be fair, very minimal, pressure somehow very tiring - although that may also have been cos Liza kept giving me valium to relax come to think of it).

Today is for resting and then tomorrow gotta drive to Porto and do it again - and in fact on Sunday we are gonna dj in a record shop there too - l and I am thinking how do people manage a huge tour of thirty dates; travelling all the time, new places, new faces, constant parties, hurrying all the time, fast food, no time to yourself... I couldn't do that.
Also he's looking a lot more healthy than last I saw him... a few have pointed out that at times he didn't look so well in those days. 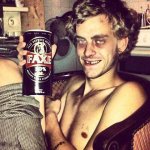 Then again he said the same about me being more healthy. I guess, looking back on that time in London, it was pretty dark in some ways.
Last edited: Sep 24, 2021

he had that skaghead thing of floating on top of everything, very genial becasue not subject to the usual tug and jostle of desire

Simon silverdollarcircle said:
Has anyone been to bed yet?
Click to expand...

You'll be pleased to know that things all got more wonky as time went on. Looking back it really feels like a week of drug taking briefly interrupted by two or three relatively short musical interludes. Every moment in Porto from the second we arrived was full on rocking.
I don't even want to think about how much money we spent on substances, perhaps not thousandS but certainly more than one thousand. Silly really cos both gigs were completely sold out and from them and the Sunday thing we got as much money as we could realistically have expected to make and even though ninety percent of it went to the artist, we could have even turned a profit for ourselves if we weren't so dumb. Though I suppose we did save a small amount of money by not eating anything at all from Friday until today.
You must log in or register to reply here.
Share:
Facebook Twitter Reddit Pinterest Tumblr WhatsApp Email Share Link
Top