It's a very fascinating document

luka said:
It's a very fascinating document
Click to expand...

You're a fucking fascinating document pal

dont know if Ive shared this before but in middle school I went to a motley crew concert with a friend. Probably the saddest display of humanity Ive ever seen, and this is even before the front man looked like this

Who, me?
The video you mad man!

It's a really interesting gut. It starts almost at nipple level, which is quite an unusual design. You don't see that very often.

the show opened with a 100 foot diaphanous curtain softly backlit covering the entire stage. Ambient drones, smoke machines, tension abound. Out walks the silhouette of a sexy angel and she sashays around a bit to thunderous applause. Then the sillouehette of the devil enters from stage left.

That sounds quite good though

the two sillouhettes meet center stage and rather than a battle between good and evil we get the twist ending of the devil sillouhette turning towards the angel so our veiw of him is the profile, revealing a massive erection. The angel then gets on her knees and blows the devil and the crowd goes wild. motley crew starts playing kick start my heart

theres soft to hard core pornography on the jumbotrons the entirety of the show. One bit that sticks out is clips of sexy nude ladies shooting big machine guns

All the while my friend and I are the only people in the audience younger than 40, and it wasn't a particuarly packed show either, so we had unobstructed veiw of all the goblins in the bleachers, mostly middle aged women in their best leopard print cocktail dresses un earthed from their teen years

not to knock on the ladies, that demographic was probably the only one with a legitimate reason to be there 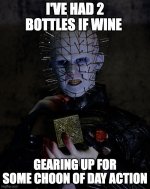 I think we were 12. I have no idea why my friends dad didnt make us leave almost immediately as he was a reformed christian type. very shy and soft spoken. I assume he was in a state of catatonic shock

Buckcherry was there opening for them. The lead singer is doing inter song banter and describing this really nasty girl he used to 'fuck.' huge tits, sucked dick like a hoover, this chick was crazy man. well one night they were fucking and she did some really crazy nasty fucked up thing with his balls, man she was a crazy biiiiiiiiiiiiiiiiiiiiiiiiiiiiiiiiitch- and as hes singing out the word bitch the band kicks in behind him and they start playing their big hit 'Crazy Bitch'

I was only joking actually, I'm completely sober 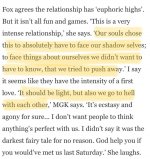