DannyL said:
I don't recall. I might have argued about him? You might be mixing it up with Jason Louv who attacked my mate Steve because of his interest in Vodou. That was a really nasty episode.
Click to expand...

I definitely know Steve yeah, and I think it was him I was thinking of come to think of it so... apologies, carry on.

DannyL said:
Fits the history of vodou very well actually though. White people scapegoating it due to their inability to handle their own fucking problems.
Click to expand...

It's often used as an exotic evil in Western media too, e.g. Angel Heart and Live and Let Die. The "Voodoo doll" is apparently more or less fiction as well.
D

IdleRich said:
I definitely know Steve yeah, and I think it was him I was thinking of come to think of it so... apologies, carry on.
Click to expand...

No worries. Steve would be happy to be thought of as Ismael Reed I think.
D

version said:
It's often used as an exotic evil in Western media too, e.g. Angel Heart and Live and Let Die. The "Voodoo doll" is apparently more or less fiction as well.
Click to expand...

Yeah, totally. Which just builds on black as evil racism. Any non-Christian black spirituality is going to get damned.
If you ever see any vodou ceremonies most practitioners will be dressed in white - there's definitely a purity/white light vibe going on with some of it - and they start with extensive Catholic prayers (pretty much all Haitian practitioners are Catholic) but that doesn't make it into the misrepresentations.

Reed's little quirks and idiosyncrasies are intriguing. He never seems to write the word 'one', always says "1". Also capitalises "Black," and "White," and doesn't always mark dialogue from whatever else is going on. The first chapter of Mumbo Jumbo also precedes the copyright, title and contents pages and some of the pages are black or grey. There's little pictures and textboxes and all sorts in the text too.
C

I really liked mumbo jumbo, especially the longish section at the end where he tells, or retells, Egyptian/Biblical Myth.

It got a little disjointed in places, but it really reminded me of the illuminatus trilogy.

Chappie Puttbutt has moved to North Oakland, still a mixed neighborhood in a rapidly gentrifying city. In need of money and a boost in pr...
www.goodreads.com

My impression is that he's not played the game, has remained pretty out there on the edge

version said:
Some of it's really reminiscent of GR,
Click to expand...

yyaldrin said:
"The headquarters of the Wallflower Order. You have nothing real up here. Everything is polyurethane, Polystyrene, Lucite, Plexiglas, acrylate, Mylar, Teflon, phenolic, polycarbonate. A gallimaufry of synthetic materials. Wood you hate. Nothing to remind you of the Human Seed. The aesthetic is thin flat turgid dull grey bland like a yawn. Neat. Clean, accurate, and precise but 1 big Yawn they got up here. Everything as the law laid down in Heliopolis 1000s of years ago. (Heliopolis, the Greek name for the ancient city of Atu or Aton.) You eat rays and for snacks you munch on sound. Loading up on data is slumber and recreation is disassembling. Transplanting is real big here. Sometimes you play switch brains and hide the heart. Lots of marching. Soon as these Like-Men disappear walking single file down the hall here comes another row at you. The Atonists got rid of their spirit 1000s of years ago with Him. The flesh is next. Plastic will soon prevail over flesh and bones. Death will have taken over. Why is it Death you like? Because then no 1 will keep you up all night with that racket dancing and singing. The next morning you can get up and build, drill, progress putting up skyscrapers and ... and ... and ... working and stuff. You know? Keeping busy."
Click to expand...

DannyL said:
No worries. Steve would be happy to be thought of as Ismael Reed I think.
Click to expand...

I thought Steve argued with IR not he was him... but whatever.

The VooDoo tradition instructs that Moses learned the secrets of VooDoo from Jethro and taught them to his followers. H.P. Blavatsky concurs: “The fraternity of Free Masons was founded in Egypt and Moses communicated the secret teaching to the Israelites, Jesus to the Apostles and thence it found its way to the Knights Templar.”

... We learned what we always suspected, that the Masonic mysteries were of a Blacker origin than we thought and that this man [a Knights Templar Grand Master in 1890] had in his possession a Black sacred Book and how they were worried that we would find out and wouldn’t learn that the reason they wanted us out of the mysteries was because they were our mysteries! -- Mumbo Jumbo
Click to expand...

Ismael Reed reminds us of another dimension of the Everlasting Gospel and its mysteries, which he terms "Jes Grew" in his incredible novel. Not only does its roots extend further back than the triumph of patriarchy, but likewise it precedes by centuries the white monopolization of the secret rites; both patriarchy and whiteness being key elements of Evola's bogus "Northern Light." The true tradition has always been open to all.

As Uždavinys explains, the principal Neoplatonic sages -- Plotinus, Porphyry, Iamblichus, Proclus, etc. -- were natives of Egypt, the Near East and Anatolia, and certainly not "European" in ancestry and or in the traditions they revered. And these traditions, in the estimation of the philosophers themselves, originated not in Greece or Rome but in ancient Egypt and Mesopotamia. 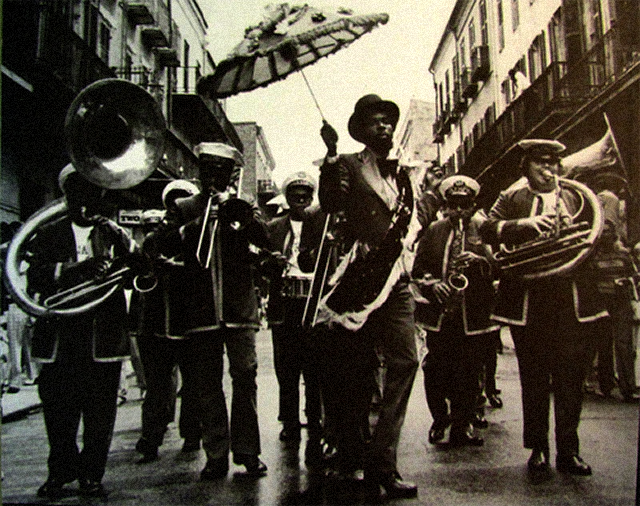 The secrets of VooDoo passed from the black priesthood of Egypt -- who in turn, according to the accounts of Apollonius of Tyana and others, obtained their wisdom from even older lineages in Ethiopia and India -- to Moses and the Old Testament prophets, to the Essenes and to the earliest iterations of the Kabbalah. From here they went on to provide the backbone of the Western European esoteric tradition, transmitted through the Templars and others.

Yet in a parallel transmission, the inner teachings of VooDoo spread to the Mediterranean and Atlantic coasts of Africa, where it was inadvertently transported by the European slave trade to the Caribbean and the Americas.

This esoteric transmission was fused and infused with the West African music of slaves and the former enslaved, and began to bubble up in ports of admixture and creative miscegenation like New Orleans. And with this subversive spread of Jes Grew through blues, jazz, calypso and other musical genres, arose the renewed rites of popular and ecstatic initiation of our era. The black mysteries reemerge to bring light to the masses.