Choon of the Day, redux

So addictive, drove nearly all day and this cunt kept me sane

WashYourHands said:
So addictive, drove nearly all day and this cunt kept me sane

Disappointed not to see Chris Rea

I like geordies but calling everyone pet is annoying

He’s probably quite handy in a row 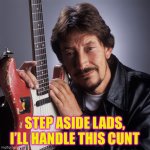 WashYourHands said:
He’s probably quite handy in a row
Click to expand...

In my experience, people from Middlesborough have the Newcastle extroversion but allied to a NW Essexlike cuntishness and aggression: lethally unpleasant combination

factor in Josephine being caned by the likes of

L. J. Roberts
1.0 out of 5 stars not as good as the Love groove dance party CD
Reviewed in the United Kingdom on 13 June 2016
Verified Purchase
Pennies from heaven came out in 1992 so it was not a Shoom tune. Feels that this tunes don't blend well. Would of been nice to of had made a Kiss FM mix CD.
Helpful
Report abuse

this is how I picture @shiels

There used to be a bar/club in Lisbon called Plantasia, it was set up to be a place for dancing but they were not granted a licence to stay open past 11 so it was completely doomed as no-one goes dancing before about 3am. And so it closed. But the people who ran it have not given up and they are keeping the Plantasia name alive by doing these videos where they film someone doing an hour long dj set and then put it on their channel. It's good cos unlike pretty much anything else like that they actually pay you to do it and so I was more than happy to oblige when they asked me. I played an hour of electro and ebm type stuff... there were a couple of records I really wanted to play but I simply couldn't find them in time and so I didn't. To make up for that disappointment I'm making one of them my "tune of the day; redux"

WashYourHands said:
So addictive, drove nearly all day and this cunt kept me sane

Oh this is really bugging me - what are those metallic noises borrowed from? eg at 3.38 and 5.19 etc oh man it's right on the tip of my tongue...

bandcamp link coz its not on youtube. loved jaimie branch for a while. perfect Eid morning tune of the day. enjoyable thing to play loud lying on the sofa in the AC while it's too hot to even consider setting foot outside.

ive not actually listened to it, i just like the title but I'm going to listen to waka flocka instead.

@blissblogger @Leo explain this tune to me. Is it good for a torture garden?

ok these are my live thoughts.

nice mellow beats obviously, in the intro anyway, that's a plus point straightaway.

i like a breathy female vocal, this is far too squeaky. i do like young marble giants and it's got a bit of that, but it's too high and weird.

actually the plinkety plonketing sounds are very reminiscent of ymg aren't there, but the lyrics are really trite and shit and the sounds are just too harsh and abrasive for me. not very nice mellow beats now i come to think of it.

heard this song a million things before, its like kate nash or something isn't it, give it a rest. i sppose we are cursed to constantly have the same problems as weveryone else has had and we need to give our spin on it, but this is definitely not a classic of the genre.

wher ei think it really trips up is the end whistling bit which seems to undercut the actual lyrical tone elsewhere. so that's just a poor decision in terms of deployment of sonic tools. now you could say that naivete is ok, but i would say they've tried something and they've failed.
C

i interrupted my listening of this