toko said:
yes, but I personally enjoy the dynamic of not having to worry about making a post that's open enough to foster a "conversation." i don't know- sometimes I enjoy reading and posting each others half-jumbled thoughts
Click to expand...

no, me too, im just bullying, stan knows what i mean

i called it early... but i also am a stan fan. i like picking on him but i also make an effort to understand him and interact. even though he always ignores me or patronises me

Genetic mechanism found that enables communities of bacterial cells to organize into surprisingly sophisticated segments, revealing a similarity to how plants and animals develop. Over the past several years, research from University of California San Diego biologist Gürol Süel’s laboratory has u
scitechdaily.com

The individuation of the cell depends on the immediate environment, such as the molecular signals received from outside a given cell. So as cells propagate across space, across a differential molecular stew, so does their individuation itself differentiate.

I remember seeing this explained in detail regarding the cells that comprise the invaginations along the colon tissue wall, how the cells at the bottom of the invagination/trough are able to replicate because of molecular signals sent by neighboring cells, and as they replicate they get pushed up away from the trough. These signals were less frequently received as the cell is pushed up to the protrusion/crest of the colon wall, and at a certain point it was out of reach of this molecular signal and it would just die and flake off into the colon's lumen, to be dispensed anally I believe.
Last edited: Jan 9, 2022

Contextually differentiated individuation of subsystems, amounting to a heterogenous supersystem like an organ or an organism.

Starts to make a lot more sense, how we can end up with the various magnificently complex organisms throughout nature. And I'm inclined to believe it can all be programmed, eventually.

Simulating this would amount to something akin to "supercellular automata", which is semantically unfortunate because "cellular automata" alone would make better sense applying to cell-like systems, rather than unit-like unitary cells.
Last edited: Jan 9, 2022

What strikes me is the simplicity of going between cell configurations, it always happens one by one, but looking at the current only does not tell you much, compared to patterns that emerge when tracing the past Cs.

Yeah its fascinating. As I understand it, all it takes is a certain molecule to enter the cell, and a whole expressive pathway can be blocked or enabled that wasn't expressed in the previous cells.

Some sonic gestures made by a PQCA Algorithm.
Not the most complex behaviour as it entirely depends on the quantum circuit that updates the cell states - meaning depending on how you set it up it's either very repetitive or very messy.
Honestly non-quantum CA implementations are years ahead in terms of advancement, there's only so much you can do with 12 bits.

As a part of my research I've looked at this guy (who incidentally does quantum computing now): 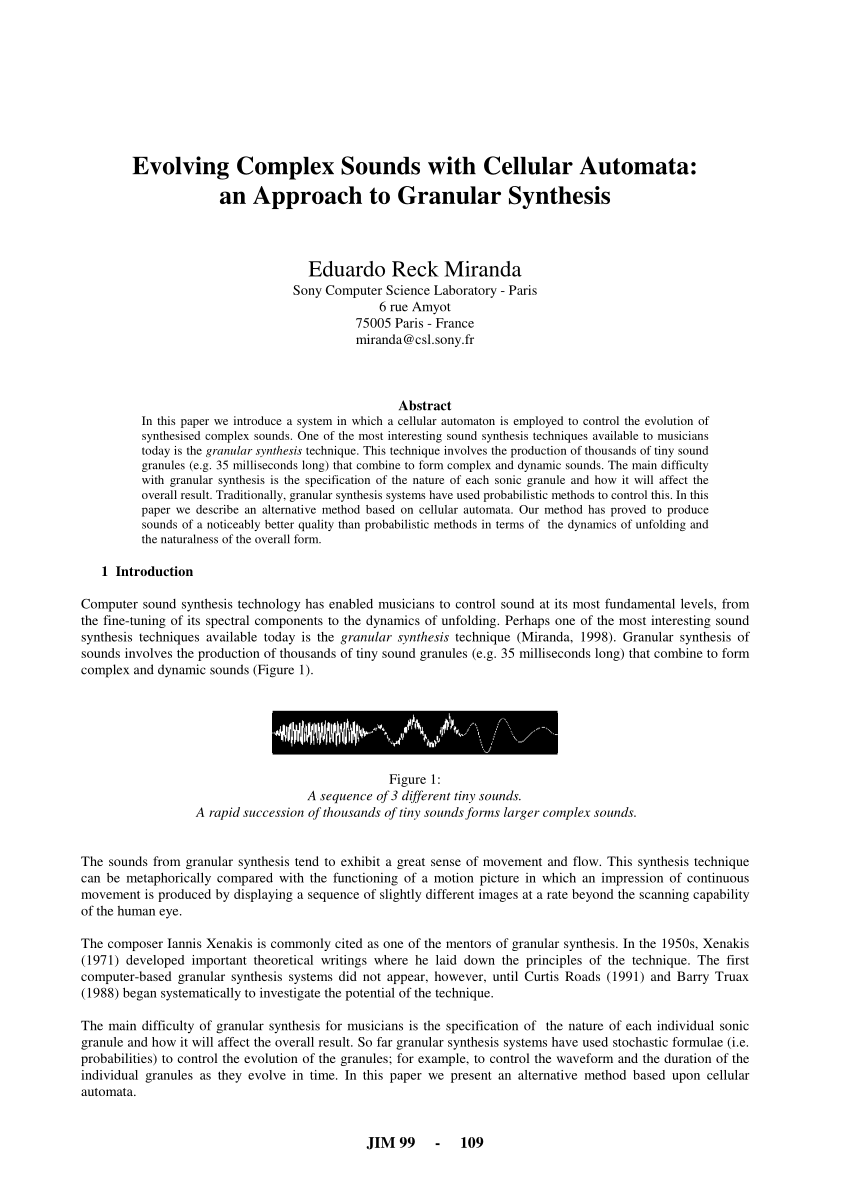 PDF | In this paper we introduce a system in which a cellular automaton is employed to control the evolution of synthesised complex sounds. One of the... | Find, read and cite all the research you need on ResearchGate

www.researchgate.net
The fact that they have modelled the CA after chemical processes is especially interesting.
Easier to tie it together in my head than Xenakis' stochastic molecule masses, or perhaps it's the visual representation that makes me think I know what's going on.
Either way it does seem like taking physical modelling into an interesting direction.

Interesting, we're almost entering mandala territory with this one.

What's mandala territory? Is it upthread? Or are you converting to Buddhism?