(taken from my newsletter, hence any difference in tone)

For as soon as the distribution of labour comes into being, each man has a particular, exclusive sphere of activity, which is forced upon him and from which he cannot escape. He is a hunter, a fisherman, a herdsman, or a critical critic, and must remain so if he does not want to lose his means of livelihood; while in communist society, where nobody has one exclusive sphere of activity but each can become accomplished in any branch he wishes, society regulates the general production and thus makes it possible for me to do one thing today and another tomorrow, to hunt in the morning, fish in the afternoon, rear cattle in the evening, criticise after dinner, just as I have a mind, without ever becoming hunter, fisherman, herdsman or critic.

I’m too young to have experienced the era of work whenin a multiple decade career at a single business was par for the course.

Recently it seems the status quo has been inching away from that, and toward having a series of occupations under different employers, gigs that may last months to years, as opposed to jobs that last decades. The gig economy, it has been called.

But it seems the equilibrium may not be found solely between jobs and gigs. Just this week was my first experience working for a DAO, a decentralized autonomous organization. This new type of organization is a novel business model in that its governance is algorithmically determined by token holders. Token holders may propose actions, such as making a withdrawal from the DAO treasury to issue a grant, for the other token holders to vote on.

My work, in this case, consisted of some basic graphic design, making a couple infographics for the DAO, called PubDAO, to display to newcomers. It was all facilitated on Discord.

For anyone unacquainted with Discord, it is a social media platform largely built around gaming, building communities around video games by way of “channels” that users can freely join. In my opinion, it is also the social media platform best poised to leverage blockchain technologies, as in DAOs.

To really break down what I did: I joined this discord channel, with a pseudonymous account - a username, volunteered for the graphic design task, took feedback from the more established members of the DAO, and qualified for a payout at the end of their payout cycle. This DAO is new and does not yet have their own governance token (i.e. crypto asset), so for the time being, I am being compensated with points that can eventually be redeemed for tokens, which will allow me to vote, to become more established in the DAO.

So business is conducted in the form of privately issued assets, without any of us knowing each others’ names, without any of us having met in person. This task, or microgig if you will, took but a few hours, and I just as easily could have volunteered for a writing task, an editorial task, or a programming task. If I have the skills, I can do any or all of the above. Having a generalist education program is helpful here.

From this experience, one may intimate a future economic status quo where a non-trivial portion of our population makes a living by way of these tasks. You can be a member in as many DAOs as you like, but your compensation levels depend on your contributions.

You may not be fully engaged in the activities of all of these DAOs, but instead take a back seat until a task arises that you feel particularly suited for.

So it may be that “post-fordism” has another phase shift yet, from the gig economy to the microgig economy. Instead of a multi-decade job, instead of series of year-long jobs and month-long gigs, we may have a hyperseries of day-long or hour-long tasks, spread across a number of specialties and skills.

Here is the DAO in question.

Decrypt and founding contributors including The Defiant, ACJR, and prominent DAOs have launched a media DAO for crypto coverage.

Clinamenic said:
Here is the DAO in question.

Decrypt and founding contributors including The Defiant, ACJR, and prominent DAOs have launched a media DAO for crypto coverage.

I don't see any need to use blockchain to do this stuff?

isnt this the same thing without crypto gimmickry ? 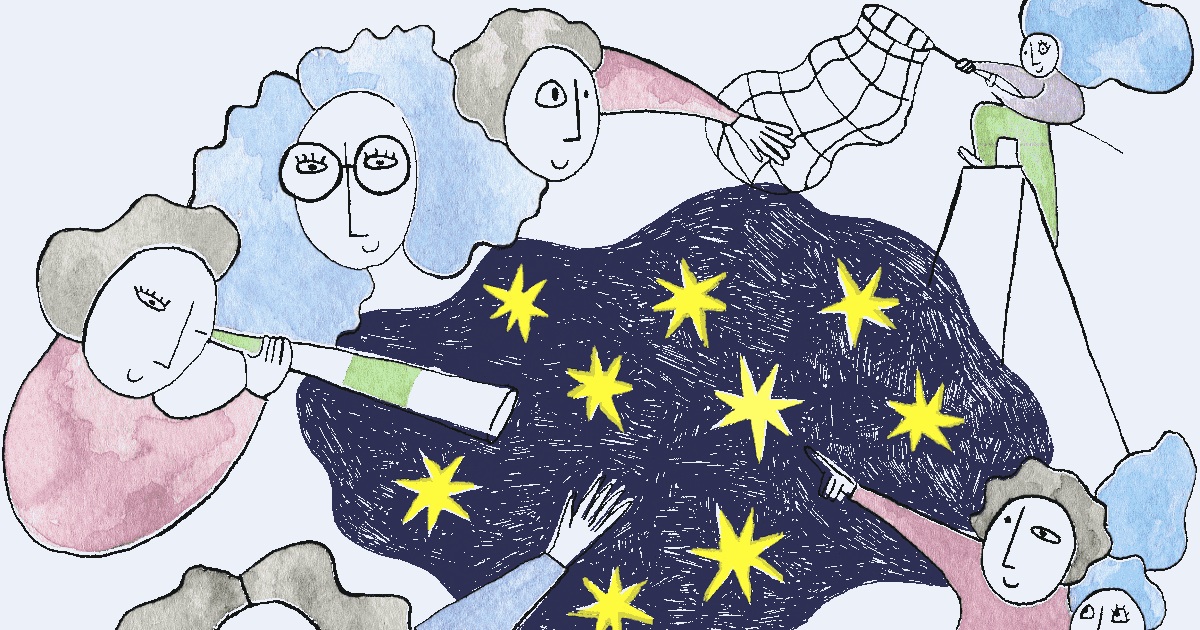 & in fact i can't see why you can't do all that without any tech-gimmicry at all? or maybe i'm missing something??

Yeah blockchain just helps with representing voting power (as "tokens" which I think is sometimes a confusing abstraction) on a publicly visible and almost tamperproof database.

What is unique here (to my knowledge) is that the actual bureaucratic administration is done by the algorithms, which are initially written by programmers, and then updated by programmer according to the votes of the token holders.

Instead of these executive decisions being made by executive officers, who ostensibly represent the will of stakeholders, the stakeholders get direct access to governance, and the code won't change unless a majority agrees upon it (unless the DAO is programmed to weigh some votes more than others, in which case it begins to cease to be decentralized).

The thing with crypto that I suspect is lacking everywhere else, is that this is a completely programmable economic/financial framework, smart contracts being algorithms that take ledger data as objects.

That isn't to say that each and every DAO has use cases that justify the novel dynamics that crypto enables, but this is a very new space, and the best practices are still being figured out.

You can arrange a DAO in such a way that any member/token-holder can propose a governance decision, such as a change to the code of the token, or you can make it so that a member needs to have contributed a certain amount in order to qualify as a proposer.

And as you spend more time in these groups, as you start to answer the questions of more recent newcomers, as you make more contributions (perhaps as specified on "bounty boards" or job lists), you establish a greater reputation in the group, and are more trusted by pre-existing members to take on greater roles in the activity of the group.

And it is much more meritocratic than traditional companies/organizations, from what I can tell so far. Nobody in PubDAO knows my name/age/gender, or even professional experience. I just volunteered to do some graphic design, and impressed them enough to be promised compensation (when the token is made) and designated as worth calling upon for future graphic design tasks.

But yeah you can have horizontal organization without blockchain, blockchain would just seem to make it easier and considerably more scalable.

Just starting to read this now: <p>Executive Summary Blockchain, like the internet, or democracy, or money, is many overlapping things. It is a decentralized record of cryptocurrency transactions. It is a peer-to-peer network of computers. It is an immutable, add-on-only database. What gets confusing is the way in which these...

<p>Executive Summary Blockchain, like the internet, or democracy, or money, is many overlapping things. It is a decentralized record of cryptocurrency transactions. It is a peer-to-peer network of computers. It is an immutable, add-on-only database. What gets confusing is the way in which these...

seems like that is more to do with certifying truth in journalism with the blockchain than using it for governance or admin?

the bit of DAOs i don't quite get is how anyone makes $$$ from it, unlike with coins and NFTs which are obvious ponzi pyramids to a great extent

Clinamenic said:
Yeah blockchain just helps with representing voting power (as "tokens" which I think is sometimes a confusing abstraction) on a publicly visible and almost tamperproof database.

What is unique here (to my knowledge) is that the actual bureaucratic administration is done by the algorithms, which are initially written by programmers, and then updated by programmer according to the votes of the token holders.
Click to expand...

no reason for the "algorithms" to be blockchainy, or even use microtechnology though, if they can just be regular co-op collective models https://www.uk.coop/start-new-co-op/start/choosing-your-governing-document ?

Yeah the DAOs aren't exclusively about making money, more about coordinating decisions in a collective without a central executive authority. They (the DAOs, as embodied by a collection of tokens) can plug into the wider crypto economy, such as if someone wants to sell their token, provided it has value outside the DAO.

Its all very case-by-case.

And the reason for them to be blockchainy is just whether or not the collective of people want to have their operations compatible with web3 architectures.

As decentralized wallets become more common (MetaMask), using DAOs to coordinate decisions may just be the easiest option, especially if the group is comprised on thousands of people, or more.

I'm surprised you and @version aren't more interested in this tech, as it seems like it would appeal to you, in terms of the values it represents.

You can create non-blockchain based algorithms to facilitate a DAO-like organization, but it would largely be re-inventing the wheel.

It would seem just as unsuccessful as my attempts to radicalize everyone else.

sufi said:
seems like that is more to do with certifying truth in journalism with the blockchain than using it for governance or admin?
Click to expand...

Exactly, this is just one of the applications of blockchain that isn't financial or administrative. Blockchains are just distributed databases, with ledgers just being one kind of database, a financial database.

Instead of a database that is supervised by a single entity whose interests may or may not align with the public interest, i.e. the common denominator or all individual interests.

Sometimes I feel like I'm whacking you people with a baseball bat and you still won't wake up. This technology will be almost ubiquitous across the internet soon enough.

Investing is only a small part of it, which understandably doesn't appeal to everyone, but what should be of more general appeal is the paradigm of trust, the new social contracts, that this technology can enable.