just throwing this out there, as the kids say. huge, if true!

Booster shots of the Pfizer-BioNTech and Moderna vaccines aren’t just preventing infections with the contagious Omicron variant — they’re also keeping infected Americans from ending up in the hospital, according to data published on Friday by the Centers for Disease Control and Prevention.

Over all, the new data show that the vaccines were more protective against the Delta variant than against Omicron, which lab studies have found is partially able to sidestep the body’s immune response.

It is generally accepted that booster shots keep people from becoming infected, at least for a while. Data from Israel and other countries have also suggested that boosters can help prevent severe illness and hospitalization, especially in older adults.

“Data from other countries have also shown significant benefit of getting the booster, but this is really showing it in the U.S.,” Akiko Iwasaki, an immunologist at Yale University, said of the figures released on Friday. “These numbers should be very convincing.”
Click to expand...

this one's for you, mixed.

On Thursday night, the C.D.C. published additional data showing that in December, unvaccinated Americans 50 years and older were about 45 times more likely to be hospitalized than those who were vaccinated and got a third shot.
Click to expand...

The updated UK vaccine surveillance report is also out:

assets.publishing.service.gov.uk
The conclusion on vaccine effectiveness there seems to be that a booster is 85%-95% effective against hospitalization with Omicron for the first three months, dropping to 80%-85% for months 4-6.

Is no one concerned about Carrie Lam killing all the hamsters in Hong Kong?

First they came for the hamsters, next it'll be the guinea pigs... 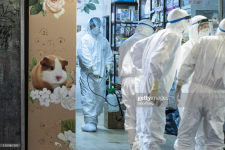 A worker with Hong Kong's Agriculture, Fisheries and Conservation Department disinfects the Little Boss pet store in Hong Kong, China, on Tuesday, Jan. 18, 2022. Hong Kong, suspecting that imported hamsters may have spread Covid-19 to humans, ordered the culling of thousands of the small mammals, closed shops selling them and sent more than 100 pet shop visitors into quarantine camp as part of its increasingly fervent quest to eliminate the virus. Photographer: Chan Long Hei/Bloomberg via Getty Images
Click to expand...

"try not to stab the guinea pig with the blade, that's not cool, watch out for the ears, you don't want to cut an ear off"

A lot of people in Lisbon have these tatts that are just thin hand drawn lines. The more they add the more it looks like a baby has just kinda scribbled all over them. I don't really understand the aesthetic at all but it is really popular.

IdleRich said:
A lot of people in Lisbon have these tatts that are just thin hand drawn lines. The more they add the more it looks like a baby has just kinda scribbled all over them. I don't really understand the aesthetic at all but it is really popular.
Click to expand...

maybe it's a form of automutilation?

can you describe the different phases of your hangover?

my vision feels granular and pixelated. my sleep isn't as good as it should be.

so no headaches or nausea?

broadly speaking my hangovers have got much milder over the last few years. i cant remember the last time i had the 'metaphyscial hangover' the one accompanied by a overwhelming sense of horror, self-loathing etc. i never get headaches. sometimes feel a bit nauseous.

but the problem this year, since i had the bug, is ive had 4 extreme piss-ups and the hangovers have persisted for days. maybe ive never got over any of them but simply compounded them