Since Stan is promising to show us his rosy cheeks soon, I think it's time to talk about the front, the face.

The front stage of social life, the space where so much of dramatic action occurs. The public persona, the mask.

And of course any other meanings/resonances of the front. The front line, the shock absorber, the first to feel the heat.

One possibility is that our cycle of selves is a cycle of fronts—roles and behaviors, ecological niches filled with action algorithms that, outside-inward, shape our internal mood. Smile to feel happy; fake it until you make it. Or that our cycle of selves is a rotation of moods, our weather forecasts for our immediate prospects, each giving rise to a different front. The front reflects and protects and acts on the basis of the the world-diagnosis that is mood.

Goffman is our best guide here.

When we watch a television wrestler gouge, foul, and snarl at his opponent we are quite ready to see that, in spite of the dust, he is, and knows he is, merely playing at being the "heavy" [ie heel], and that in another match he may be given the other role, that of clean-cut wrestler, and perform this with equal verve and proficiency. We seem less ready to see, however, that while such details as the number and character of the falls may be fixed beforehand, the details of the expressions and movements used do not come from a script but from command of an idiom, a command that is exercised from moment to moment with little calculation or forethought.
Click to expand...

Different cultures give quite a bit different weight to protecting the front, avenging the face, upholding appearances and reputation. Southern aristocratic/plantation society—a British immigrant offspring—is known for its honor culture, as are the Japanese.
S

Lotta overlaps with the Mask and Hypocrisy thread but we'll have to live with that.

Goffman does the identity performativity thesis in 1960 BTW

when we observe a young American middle-class girl playing dumb for the benefit of her boy friend, we are ready to point to items of guile and contrivance in her behavior. But like herself and her boy friend, we accept as an unperformed fact that this performer is a young American middle-class girl. But surely here we neglect the greater part of the performance.
Click to expand...

To be a given kind of person, then, is not merely to possess the required attributes, but also to sustain the standards of conduct and appearance that one's social grouping attaches thereto. The unthinking ease with which performers consistently carry off such standard-maintaining routines does not deny that a performance has occurred, merely that the participants have been aware of it.
Click to expand...

can i do my bit about how for americans in particular the face is the site of control, it is used consciously, it doesn't spontaneously change to reflect interneal conditions or reactions to external events, the face-owner tries to remain in control of his affects at all times.

when two boxers meet for press cnferences they always unfailingly say, youre scared i can see it in your eyes

that was quite a frightening but ultimately liberting realisation. the mask is only a mask for the person wearing it.

laing has got good stuff in the divided self about the catastrophic consequences of the mask. the don't D&G claim WHITE MAN is the only man with a face? 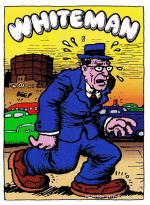 its certainly an effort to maintain the face and a relief to remove yourself from society and thus from the face, and creep ever further back into the cave dephs, away from the face which is cave mouth into cave deeps

youre a kind of puppeteer of the face

If all this sounds overly complicated, remember how good we tend to be at the semi-instantaneous, micro-calculations involved in gauging social contexts and determining optimal responses, what Erving Goffman calls “face-work.” It’s the very premise by which we navigate social life. Still, people especially good at gauging cultural signification fields — and who have undergone the necessary data uploads of class-linked education and cultivation — often become artists, art being a field which manipulates and leverages soft meanings towards ends that run the gamut from comfortable to shocking.
Click to expand...

this quote was made by Paul @shiels of Belfast, in Northern Ireland. a friend of mine.
S

luka said:
laing has got good stuff in the divided self about the catastrophic consequences of the mask. the don't D&G claim WHITE MAN is the only man with a face?
Click to expand...

I don't know any of this please enlighten us

as a young person up to the age of 20 i was defintely trying to hide all the time then i worked out that everyone could see me and they liked me cos of what they could see and not by the mask which they were not fooled by at all or didnt even actually notice.

listening back to me reading that thing leo posted made me laugh becasue i thought i was putting on my 'well spoken' voice which it turns out is indistinguishable from any other voice i think im doing. its always me.

suspended said:
I don't know any of this please enlighten us
Click to expand...

i cant unfortunately i have to run out but luckily poetix is an expert on these topics, get him to guide you through it, he knows all laing and all d&g better than any man alive
S

What do you think the relation of the face to the textual/literary "front" (presentation of self to world), do you think? In both we "read" and "write to" each other.

I guess autofiction, memoir stuff that's been popular last 50 years is a practice of turning the backstage into a (decorated, elevated, ugly-but-in-an-aestheticized-way-and-thus-idealized/made-loveable) front
S

I think Poetix has me muted I think he muted me a while back, I don't exist in his digital world, I've been banished
S

luka said:
one of the big things in my life was realising that there is no mask and youre fooling nobody
Click to expand...

Tell us more about this then.

suspended said:
Tell us more about this then.
Click to expand...

the interesting thing is that once you work this out and stop pretending you become much freer to throw yourself into different roles, you actually become way more protean as a result
S