Slaithwaite has a Co-operative Food store and an Aldi supermarket.

Chemist shops are in Manchester Road and Carr Lane.

The village has a bank and building society in Carr Lane.

Around half a dozen pubs can be found close to the centre together with some cosier hostelies with good food in Slaithwaite's rural outskirts.

The village has fish and chip shops, a sandwich shop, indian, asian and pizza takeaways.

Slaithwaite library opens on some days of the week 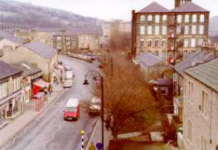 Not long ago Slaithwaite was just another semi-rural, post-industrial village.


Today it's one of the coolest places to live in the North outside the big cities.


So how did Slaithwaite change from a working-class mill town to a honey pot for hip, young families?


I donned my chunky red beanie and (fake) Wayfarer sunglasses and went to find out. 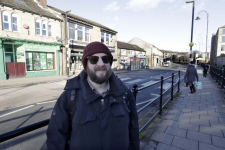 Acorn & Pip is quintessential Slaithwaite. It sells sustainable kids' clothes and games. It has a play area for babies and toddlers plus a natty vegetarian cafe where I enjoy an awesome Reuben sandwich, minus the corned beef. It's helped down with some fruity cola which is naturally Fair Trade.


At £10.45 it's not a cheap lunch, but you can tell it's aimed at people who'll pay more for high grade ingredients, sourced ethically and ideally, locally. From the elite bread to the homemade Russian sauce – think of the relish in a Big Mac but in taste Technicolor – it's a winner although more of a treat than a regular choice for lunch. 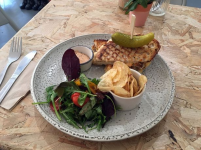 You can buy a three-bedroom terraced house from around £150,000.

Slaithwaite has a vibrant centre with many independent shops, a post office, restaurants and cafes. Of particular note is the local butcher, E. Grange & Son (Master Pie Makers), selling their own brand of pork pies, which have won some awards 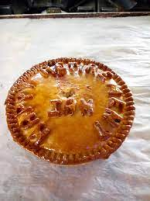 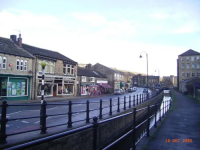 SLAITHWAITE, a village, a township, a chapelry, and a sub-district, in Huddersfield district, W. R. Yorkshire. The village stands on the river Colne, the Huddersfield canal, and the Leeds and Manchester railway, 4½ miles WSW of Huddersfield; and has a station on the railway, a post-office under Huddersfield, and two annual fairs. The township comprises 2,320 acres, and is in Huddersfield parish. Real property, £6,424; of which £13 are in quarries, and £120 in gasworks. Pop., 2,932. Houses, 575. The manor belongs to the Earl of Dartmouth. Slaithwaite Hall includes remains of the ancient manorial residence. The railway, in its course through the township, traverses two viaducts of 18 and 19 arches. Mineral baths are here, with fine gardens, amid romantic scenery: and are much frequented in summer. The woollen manufacture is carried on. The chapelry contains also Lingards township, in Almondbury parish; and comprises 2,820 acres. Pop., 3,715. Houses, 724. The living is a p. curacy in the diocese of Ripon. Value, £192. Patron, the Vicar of Huddersfield. The church was partly rebuilt in 1856. There are four national schools, and an endowed school with £42 a year. The sub-district contains also another township and a part, and comprises 10,740 acres. Pop., 7,971. Houses, 1,599.

SLAITHWAITE, a chapelry, in the parishes of Huddersfield and Almondbury, union of Huddersfield, Upper division of the wapentake of Agbrigg, W. riding of York ; containing, with the township of Lingarths, 3726 inhabitants, of whom 2925 are in Slaithwaite township, 5 miles (W. S. W.) from Huddersfield. This chapelry comprises 3073a. 3r. 3p.: the lands are in meadow and pasture, with a small portion of arable ; the scenery is bold and romantic. In the quarries of the district are found vegetable fossils, especially firs and other mountain trees. The village is beautifully seated in the valley of the river Colne ; the inhabitants are chiefly employed in the woollen manufacture, in the spinning of cotton and silk, and in silk-weaving. Slaithwaite Hall, an ancient mansion, situated on a hill which has indications of having been a fortified station, is now divided into cottages: the old manor-house near the chapel is still used for holding the courts leet of the manor of Slaithwaite cum Lingarths, of which the Earl of Dartmouth is lord. About the year 1820, a spring strongly impregnated with sulphur was discovered, and also a chalybeate spring, in their properties closely resembling the waters of Harrogate. Mr. Richard Varley has since erected baths with every requisite accommodation for the use of the waters, has built several cottages for visiters, and laid out gardens and pleasuregrounds, which are tastefully embellished. On an analysis by Mr. West, of Leeds, an imperial gallon of the sulphureous spa was found to contain, 0.7 grains of chloride of calcium, 0.4 of chloride of magnesia, 2.5 of chloride of sodium, and 20.4 of carbonate of soda: the gases are sulphuretted hydrogen, 0.75 of a cubic inch ; carbonic acid 1.25, and carburetted hydrogen, 4.75. An inflammable gas rises from the surface of the water. The chalybeate spring was found to contain in an imperial gallon 3.4 grains of sulphate, 4.0 of carbonate of lime, 2.4 of carbonate of magnesia, and 3.3 of oxide of iron. There are several reservoirs in the district, one of which, comprising 17 acres, is for the supply of the Huddersfield canal. The road from Leeds to Manchester intersects the village, and is nearly parallel, on the south side, with the river Colne and the canal. Fairs for cattle are held on the Friday before May-day, and the last Friday in October. The living is a perpetual curacy ; net income, £192 ; patron, the Vicar of Huddersfield. The ancient chapel, repaired in 1593, and rebuilt in 1719, stood near the river, where is now a cemetery. In 1788, the building was taken down, and the present spacious though plain edifice erected on ground given by the Earl of Dartmouth ; the tower was added in 1814, and an additional cemetery, on the north side, was consecrated in 1842. The free school was founded and endowed in 1721, by the Rev. Robert Meeke, then incumbent, and has an income amounting, with subsequent benefactions, to £42 ; the master must be a communicant, but not the incumbent, of Slaithwaite. The school-house, which adjoins the ancient chapelyard, was rebuilt in 1744, and again in 1842. There is also a national school, for which a handsome building was erected in 1840, at an expense of £650: it is endowed with a surplus fund of £150 ; and a building erected in 1825 for a proprietary grammar school has been taken on lease for the residence of the master and mistress. The Slaigh or Sloe tree, which formerly spread over a great part of the district, gave the original name of Slaighthwaite to the township ; and from the Ling plant the township of Lingarths derives its name. 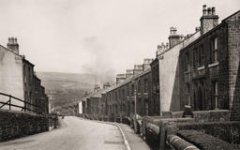 In February, on alternate years, Slaithwaite celebrates a 19th-century legend of Moonraking[6] with the Slaithwaite Moonraking Festival, with a week of lantern making and a programme of storytelling. The week-long celebration, which always takes place during the school half term week, ends with a parade of lanterns around the village, and a festival finale by the canal in the centre of the village. A heritage lottery funded project 'Wild about Wool', that is collating memories of the industrial heritage of the Colne Valley, is linked to the festival. 'Wool' was also the theme of the festival held in February 201

The River Colne /ˈkoʊln/ in West Yorkshire is formed at the confluence of two brooks that originate in the Pennines close to Marsden. It flows in an easterly direction through the Colne Valley and Huddersfield towards Cooper Bridge where it flows into the River Calder.

The Colne Valley was famous for the production of woollen and cotton cloth regarded as some of the finest quality produced anywhere and all due to the soft acidic waters of the River Colne and its brooks running down through the side valleys (cloughs) from the peat moors above.. 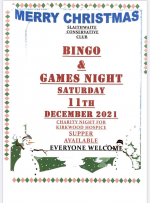 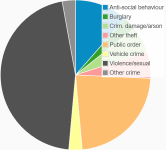